Summary: The 21MTC connector is another plug and play interface for multifunction decoders. Unlike the PluX Interface, the female connector is on the decoder. It is also a low-profile decoder, with the components installed on the underside. 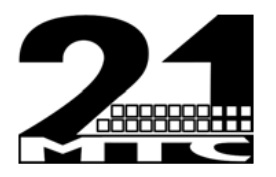 Bachmann Branchlines use a slightly different version of the logo;

but the connector is the same.

The 21 Pin MTC Connector is a Multifunction Decoder Locomotive Interface intended for sound applications. This is a direct PCB connector (there is no wiring harness), the decoder is intended to plug directly onto a fixed pin header on a motherboard inside the locomotive. Decoders designed for the 21MTC connector are intended to fit into defined size, allowing it to be installed in most vehicles without the requiring tools for installation or removal. Connections via a cable are not provided, as an interface cable does not conform to this standard.

The 21MTC interface supports the connections for a motor, a baseline of 12 functions, 2 sensors, and a data bus expansion with options to support 12 function outputs.

Originally designed by ESU for certain Märklin and Trix locomotives which is presumably where the name comes from (Märklin/Trix Connector). Confusingly, the accepted standard for the 21MTC connector is not the same as the original Märklin/Trix connector. For example, Zimo manufactures two multifunction decoder types with 21 pin connectors, type C is for Märklin/Trix with C-Sinus and Softdrive motor and type D is for the 21MTC standard.

There is a variant unique to Marklin, which is identified by 21MTC-M. 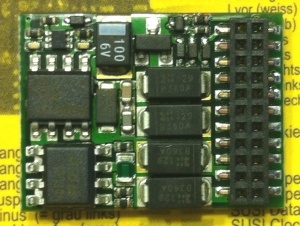 A decoder with an 21MTC connector

This connector is unusual in that it appears to be backwards: The connector receptacle is mounted on one side of the PCB; the multifunction decoder is plugged into the locomotive motherboard by inserting it so the pins come up through holes in the underside and into the connector. The blanked off position is achieved by the lack of hole in the board at that location. This may not be obvious from first inspection so extra care should be taken during installation to avoid damage caused by incorrect orientation or damage to the mating pins.

Many websites published in English will have outdated information regarding the 21MTC Connector. The standard they reference can be up to a decade old, and out of date. Currently Fédération Européenne de Modélisme et Amis des chemins de fer d’Europe does not publish their standards in English, as they have not been translated. The most recent versions are available in French and German.

This article used the most recent NEM standards in its preparation.

NMRA Acceptance of the 21MTC Connector

As of December 2020, the NMRA has accepted the 21MTC Decoder Interface under NMRA Standard S-9.1.1.3. Previously the NMRA implementation was not aligned with the NEM standard. As of 2021, this conflict has been resolved with the NMRA adopting the NEM pinout. The NMRA acceptance of the NEM pinout includes a provision for AUX3 – AUX10 outputs to be redefined as open collector outputs instead of logic level outputs.

Verify the pinouts, as older 21MTC multifunction decoders may still be on the shelves at hobby shops.

The NMRA Standard requires the 21MTC Logo to appear on packaging of locomotives featuring this interface, as well as decoders with this interface.

NMRA Standard S-9.1.1.3 has redefined the function outputs to align them with the NEM Standard.

The 21MTC defines output pins 7, 8, 14, and 15 as Open Collector/Drain switched (heretofore indicated as OC) outputs. Variations exist with output pins 3,4,13 and 17, identified as outputs AUX3 to AUX6.
S-9.1.1.3 requires providing outputs higher than AUX2 as logic level outputs. While AUX3 through AUX6 are always required to support TTL/LVTTL logic-level outputs, an open collector/drain option switched against ground may be provided. The default configuration must support TTL/LVTTL logic level on AUX3 through AUX6.

These issues only apply to 21MTC Decoders manufactured prior to the NMRA's adoption of S-9.1.1.3.

While the 21MTC connector is considered to be a standard, the NMRA does not recommend its use. Unfortunately, a multifunction decoder which fits may not be the correct multifunction decoder for the application. There are technical issues, in that the decoder may be compliant, while the interface or the model is not compliant to the specification.

The NMRA standard provided for an open collector AUX3, which some manufacturers, such as Zimo, TCS and others follow. The NEM 660 standard requires a Logic Level output on AUX3 and higher. A voltage is always present on these pins.

The "open collector" output performs a switching function, which relies on voltage supplied by the common connection on the decoder.

The 21MTC interface can be used with AC motors (2 field coils), DC motors or Coreless motors. The interface provides up to eight function outputs as well as two Sensor inputs.

The interface on the system (mother) board consists of a male 22-pin, two-row pin header. The dimensions of the decoder are a maximum of 30 (L) x 15.5 (B) x 6.5 (H) mm. On the system board, the installation space must be such that the decoder can be inserted without jamming. Pin and socket strip are arranged in two rows of 11 contacts. Alignment coding is by the omission of the 11th pin and blocking the associated socket.

The multifunction decoder module carries a female socket. The socket is located on the flat side of the PCB, facing away from the motherboard.

As with the Plux type decoders, there is a smaller version described. It is designed to be the smallest profile possible for a multifunction decoder.

If space is at a premium, the standard allows for a multifunction decoder with the socket facing the locomotive interface, to reduce the vertical clearance.

From the NEM 660 Standard Aug 2015. Note: Many of the NEM Standards available in English are outdated by 10 or more years! This table was taken from the German Version.

Group 8 (AUX3 – 6) are Logic Level, the motherboard in the locomotive should contain any additional circuitry required to interface the logic to external functions.

The previous NMRA Standard does not follow the NEM standard exactly. There are some differences.

A number of manufacturers have also began adding a custom motherboard to their locomotives with a co-processor to control the FX functions. This leads to issues when replacing the multifunction decoder, as they have been designed to work together. Programming can be difficult as a result.

Operation Without a Multifunction Decoder

With the installation of a suitable plug, operation of the locomotive without a decoder is possible.

The Decoder Buddy is an adapter board manufactured by NixTrainz which makes installation of a 21-pin multifunction decoder easier.

It is 56 X 17 X 1 mm PCB that will fit most locomotives and allows easy installation of a 21 pin decoder such as those from TCS, SoundTraxx and ESU. Full details are on their website.

The 21HW is a PCB with a female connector meant to be used to adapt a multifunction decoder with a harness to a 21MTC motherboard in a vehicle.

The 21HWM is a small PCB with an 21MTC (male) connector, meant to be used with a 21MTC multifunction decoder.

ESU offers the 51967 21MTC adapter board (LokPilot/LokSound V3.0 and V4.0), which features a male connector to allow you to install a 21MTC multifunction decoder in a vehicle. Solder pads are provided for wiring.

Soundtraxx offers their JST-21PNEM Adapter to connect a Soundtraxx 21PNEM decoder to an NMRA 9-Pin DCC equipped model. Can also be used with the SoundTraxx 9-Pin JST power harness.

How to Plug in a Tsunami2 Decoder with a 21PNEM Connector