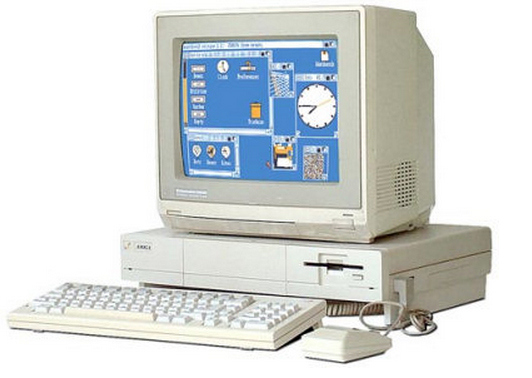 It should be noted that connecting a computer to a Digital Command Control layout is not required for setup or the running of your layout, but they can be helpful; for the same reasons they can be helpful in other areas of everyday life. Since DCC is digital by nature, it's easy to have computers control, or monitor, your layout.

There are various types of DCC software available. Some software programs your decoders, which can be either mobile decoders or stationary decoders. Other software, allows for train control and acts like a cab (throttle).

Please see the Software page for other software relating to trains at a more general level.

Modern multi-function DCC decoders have many options. To get the most of them, you must put specific values into a large number of configuration variables (CVs). This is called programming, and most DCC systems provide a means to do it. Typically, this involves letting you put a number into a CV that is referenced by its location; hardly a user-friendly interface! A computer can simplify this by keeping track of values, while displaying options in human-readable terms instead of bits.

The JMRI software is a suite of programs and is a single download. Don't worry about about trying to get each part separately - they're all bundled together. Also, you do not need to use each part of the suite to get a specific task done - that is you don't need to setup the automation part if all you want is to quickly program your decoders. 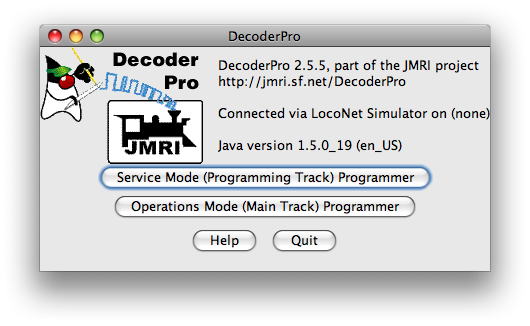 If you need a quick, simple to use, cross-platform software for programming decoders (mobile and stationary), then this is the choice for you. Many people that have expensive track control software, still use this software for its ability to quickly, and simply program a wide range of decoders. The JMRI suite of programs runs on Mac Classic and OS X, Linux, and Windows machines, all under Java. All major manufacturers of DCC equipment (Supported Hardware webpage), systems and decoders, are supported. A very active JMRI users group is available for user support on Yahoo Groups. 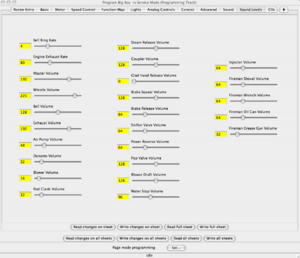 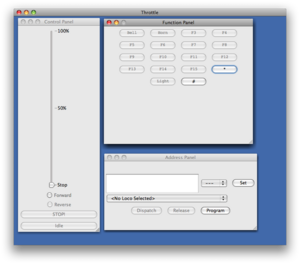 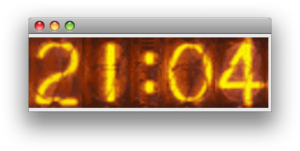 PanelPro contains a host of tools for managing and running your railroad. Fast clocks, throttles, Loconet managment, turnout control, consisting, and even the ability to control layout power is available.

The operations segment includes a tutorial to make it easier to learn how to implement operations on your layout. For more information see the JMRI Operations webpage 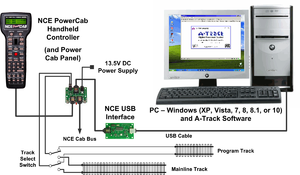 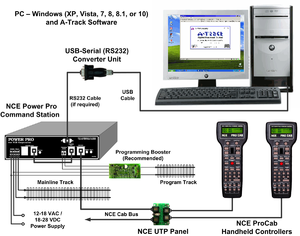 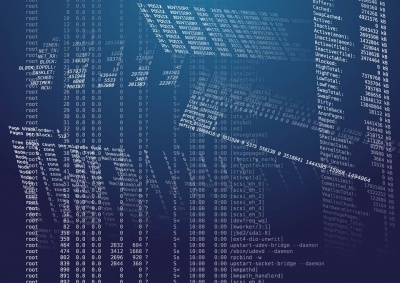 The Big Bear Rail Controller is an easy to use PC based controller application aimed at the British modeller supporting multiple throttles and track diagram. Cost is based on the number of controlled locos or trains and prices start at £19.95 for a 7 loco system with incremental upgrade options for those that wish to start small and grow later. A free version is available for those that wish to use Big Bear with no more than two locomotives or wish only to use the track diagram.

CTI Electronics This software will control DCC trains and accessories such as turnouts, from a screen-based CTC panel and on-screen throttles. Although DCC trains can be controlled "out of the box", most other functions require some programming via the bult-in TCL programming language (TCL = Train Control Language). TCL is similar to BASIC and easy to learn, aided by step-by-step lessons in the supplied manual and on-line "help". CTI does not currently support monitoring of DCC-based input devices such as occupancy detectors, but separate hardware modules are available for sensor inputs, and also for controlling turnouts or signals. Thus it is possible to create a hybrid system with DCC control of trains and CTI hardware for track occupancy and turnout position sensors, with either DCC or CTI hardware for turnout and signal controls. Here is an example of a layout with CTI-controlled signals and turnouts.

Digitoys Systems produced software called "WinLok" for running and configuring DCC systems. The last version is v2.1 with no future versions planned. Since this is legacy 16 bit software, it will not run on any modern Windows OS (i.e. Vista, 7, etc.). Digitoys Systems has since ceased doing business. It is equivalent to JMRI's PanelPro

MRC offers a proprietary computer interface for their Prodigy DCC products, along with software.  The software is for Microsoft Windows only, and is the only software which works with their Prodigy Computer Interface.  At this time there is no other software package that can interface with the MRC Prodigy DCC system.

iTrain offers an easy to use solution to control your model railroad with your computer(s), especially if you want to automate only parts of your layout and keep control of the rest yourself. For example, automatic block control avoids collisions and you control which train is driving manually or fully automatically according to a selected route.