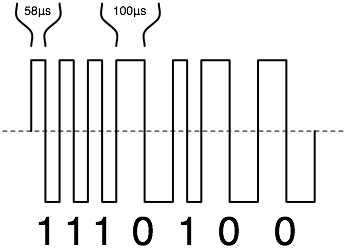 The digital data is not superimposed on a DC or AC waveform, nor does it use a high frequency carrier in addition to the power applied to the track, unlike past and current command control systems. Since the rails are alternately energized or held to zero, there are no issues with polarity. The digital information is encoded in the time domain by pulse width, not by amplitude. 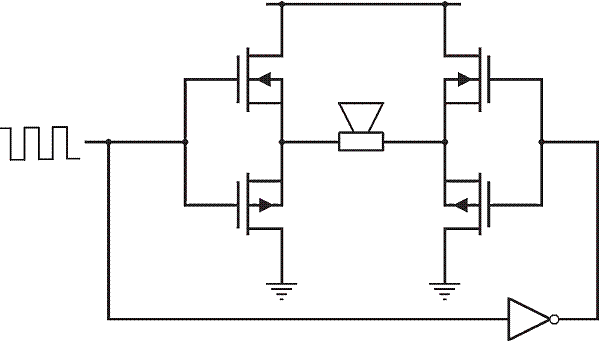 The booster is a digital amplifier. It receives a logic level waveform from the command station. Logic level signals have two states: On or Off. The data is contained within the period of the on/off sequence. This logic level voltage is amplified to the necessary track voltage determined by the Scale of your model trains.

The amplification is performed by two pairs of transistors functioning as switches. When the digital input is low, one pair is switched on to create a path for current to flow though the power bus. When the digital signal changes to the high state, this pair turns off and the other pair turns on. For example, when the digital signal is HIGH or ON, pair A is switched on, delivering power to Rail A and facilitating its return to the power supply. When the inout goes low or OFF, the booster's circuitry connects Rail B to the power supply via pair B. This switching sequence creates the pulses on the rails which deliver both data and power to the multifunction decoders on the track. Most boosters are constructed to prevent any output in the absence of a digital input signal.

The voltage output of the booster is dependant on your scale. N and Z Scales require much less voltage than O or Large Scales. Where N Scale may require 12V, a large scale locomotive may require up to 24V for proper operation.

The digital data is represented by the time (period) the rail energized. There are no positive and negative voltages on the rails, the rail is either on or off. The multifunction decoder only sees its input signal go high and low. A total period of 58µS High + 58µs Low represents a binary value of 1, a total period of 200µs represents a 0 value.

This is not an AC signal, as the rail will have positive voltage on it, or none, at any point in time. What is happening is the current is changing direction as it moves from one rail to another. Measuring this with an oscilloscope will display a peak to peak signal, which many will claim supports their assertion that the signal is an AC waveform. Since there is no reference point, the trace indicates which connection was more positive than the other in time.

The idea Digital Command Control waveform is a square wave. Yet, the influence of the power bus and track, as well as the design of the booster present a number of challenges, such as distortion of the waveform.

Matching the impedance of the track and power bus to the booster is impossible given the multitude of factors present in layout wiring, the engineers designing DCC boosters have to try their best to ensure a good quality signal within the tolerance specified can be achieved. They will try to optimize the time the output is off during the transition from one state to another, and how quickly the on/off sequence should occur during the bit transitions. At the same time they are trying to minimize excess heat production in the output stage.

Digital Command Control has no concept of polarity. Digital signals do not have the concept of negative. A negative voltage would be considered an Undefined Value.

Oscilloscope trace of a Digital Command Control waveform as seen on the track.(Probe is connected to one rail and ground clip to the other.)

Summary
Simple On/Off (binary) signal, with one rail always the inverse of the other. 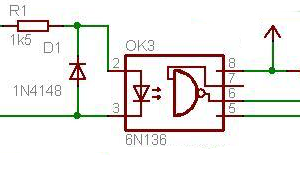 The input circuit for a multifunction decoder consisting of an opto-isolator, with a "free wheeling" diode to protect it from a reverse bias condition. This circuit allows the vehicle to face either direction while still providing a usable data signal to the multifunction decoder.

The command station will either transmit idle packets or previous packets. No data, no track voltage. The command station software will have logic in it to determine the sequence and repetition of packets to insure that the bandwidth available is used efficiently.

Bandwidth is taken into consideration during the design stages of the command station. The NMRA standard determines the maximum bits per second can be sent. A command station will send about 180 three byte packets per second. Larger packets, such as those for 128 speed steps or sound commands, require more time thus reducing the number of packets transmitted every second.

Command stations address bandwidth limitations with techniques such as queueing. New packets are sent first, older packets later. Properly done, several hundred locomotives can operate simultaneously with no noticeable problems, as multifunction decoders continue to do what they are doing until told otherwise. A train moving travelling on the main line requires less bandwidth than a switcher constantly changing direction and speed during yard operations. Consisting can also reduce the bandwidth required when operating many trains.

Higher end command stations use even more logic to determine the order packets will be sent. Several innovations reduce the number of packets that must be sent, such as advanced consisting, where one packet addresses several decoders, decoder feedback, where a decoder acknowledges it has received a good packet, negating the need to send it again, and dual command packets, where several instructions can be combined into one packet. These techniques reduce the bandwidth demanded to operate large numbers of trains effectively.

Fournier Series on wikipedia All about how you can create square waves from a sine wave and its harmonics.