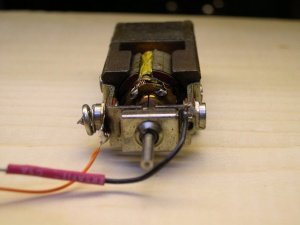 Some manufacturers will not warranty a decoder when any flux was applied during installation. This is directly related to the use of inappropriate flux products.

Analog power packs with pulse power capabilities produce a very dirty DC output. The presence of voltage spikes produced by the pulse circuit can destroy a multifunction decoder. Therefore, it is advisable to avoid attempting to operate a decoder equipped locomotive using an analog power pack.

Operating on an analog power pack will void any warranty, as the manufacturer is not responsible for the decoder's failure.

If that occurs, the power conversion mode has been set to NMRA Digital Only, so the decoder, while powered up and active, will not apply power to the motor or respond to any changes in throttle settings.

The solution is to change CV29 so it can operate on an analog layout.

This can only be done using a DCC system, so planning is required before moving the locomotive to an analog layout. Many modellers disable the Alternate Power Source setting in CV29 by setting it to "NMRA Digital Only." This is done to prevent runaways.

Decoder Will Not Respond

The NMRA DCC Standards specify the default address for a multifunction decoder is 3 (three). Enter the address as 3. Using numbers such as 03, 003, and 0003 will not work.

Multifunction Decoders which were installed at the factory are not required to use "3" as their default address. Read your instructions for the locomotive regarding its default address if it will not respond to address 3.

Decoder Has Sound, Will Not Move

Many sound equipped decoders include various shutdown/startup routines, as well as Idle. There may also be a function which must be released first.

For example, the locomotive has prime mover sound, but will not respond to throttle commands.

The decoder may be in IDLE or NEUTRAL. There may also be a brake function which is active. Consult the manual to see how to change that, as many decoders are different.

Many Atlas and BLI products came equipped with QSI decoders. Some brass importers may have used them as well.

If the locomotive is part of a consist it may not respond to its address.

The multifunction decoder has two types of memory:

There are many types of memory. The most well known is RAM, or Random Access Memory, which will lose its contents when power is removed. Another form is ROM, or Read Only Memory, which is not affected by power loss. It is programmed at the time of manufacture.

After a successful startup (or a restart), the decoder checks to see if there are digital or analog voltages on the track. If it sees a digital packet, it switches to a digital mode. The NMRA DCC standard defines a number of modes available, under the term “power conversion”. Most decoders only support two modes, DCC and Analog. The need to support other digital modes was reduced as DCC became more popular.

Ghost throttles can cause loss of control. If another throttle has the same address selected, it can cause erratic operation as the command station responds to speed changes caused by one of the throttles.

Dispatching properly is important, as locomotives can creep because a throttle was not set to zero prior to the dispatch.