Summary: By matching speed between locomotives, consisting can be done easily without introducing problems

The goal: With the same throttle setting, each locomotive should travel the same speed (or the same distance at the same time). Think of method as distance/time matching rather than speed matching. 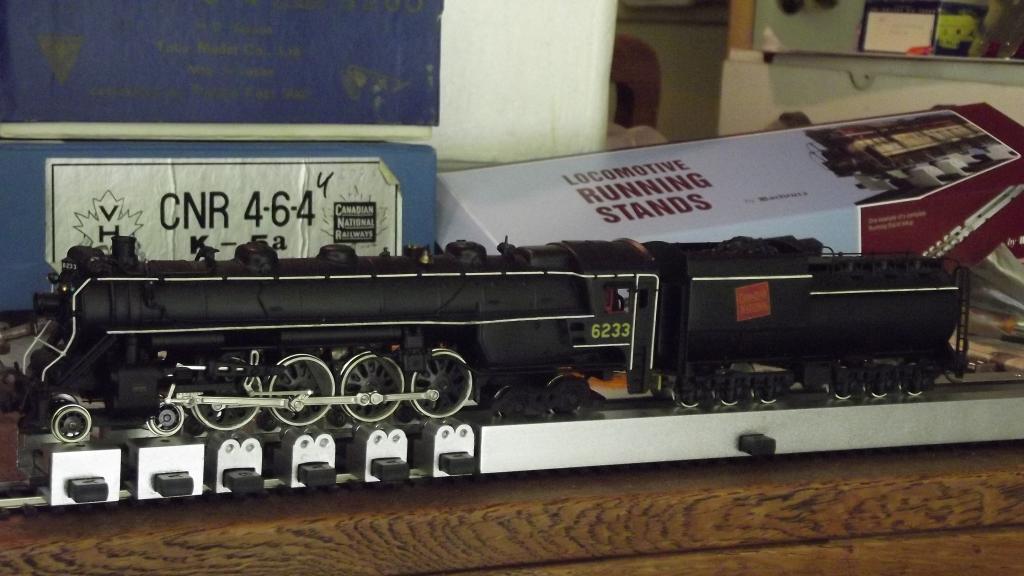 Running Stands in use. These were made by Bachrus Inc. Picture by don7.

This method involves running locomotives on a long section of track and timing how long a locomotive takes to travel that distance. For N scale, you'll need 15-20 feet, you'll have to adjust this method to your scale. Measure out a known distance on your layout, the longer the better. You'll also need a stopwatch. If you have a straight double track section this can be helpful as well. Clean the track and wheels beforehand to eliminate any pickup issues.

Ideally a double tracked section of mainline can be used to compare two locomotives simultaneously.

Another possibility is to use a test stand with a speedometer, such as that which was offered by Bachrus. That allows you to adjust speeds on your workbench.

Before beginning determine which locomotive runs the slowest at a given speed step. Trying to match a slow locomotive to ones which are faster will be frustrating.

If you have DecoderPro available:

If you do not have DecoderPro, read the CVs below in each locomotive and make note of them before altering any CV.

After the Slowest and Fastest speeds have been matched, some adjustment in the middle will be needed.

This is to verify the locomotives have a good match, by slowing incrementing the throttle and observing their behaviour. If problems appear, repeat the process to match them.

Using the notes made earlier, set the momentum via CVs 3 and 4 to their previous values. Run the units again, at various speeds, then change direction on the throttle to see how they slow to a stop and reverse. Make any adjustments deemed necessary.

Once you get the above working, you now start turning on special features such as BEMF if you feel the need. After doing that, again verify that they are matched.If the Decoder supports BEMF Cutout, adjustments may be needed to make the locomotives have a similar cutout.

Things to Keep in Mind:

Some decoders may have a Forward/Reverse Trim feature, which allows you to adjust the speed to match in both directions.

Consist the locomotives, and couple them together. Take them out onto the mainline to see how they behave at various speeds. Mute the sound (if equipped) so that odd noises, like wheel slippage can be heard. The consist should run smoothly with little surging or bucking. If so, the culprits may need additional tweaks to the speed ranges that require them.

If you used Decoder Pro, be sure to save the updated roster information.

Note: Speed tables must not have a a step set to a value lower than that of the previous step. Doing so will cause problems. Software such as JMRI DecoderPro or ESU's LokProgrammer will prevent this mistake from happening.

QSI multifunction decoders do likewise: The values in CVs 2 and 5 impact the speed table.

ESU V4 and Select multifunction decoders also have differences (excluding those with an early firmware version). Again, CVs 2 and 5 are used to modify the speed table (when active) by specifying the VStart and VHigh values. CVs 67 and 94 are fixed values. The advantage is that the bottom and top of the speed curve can be altered easily while avoid mathematical errors possible when using QSI's method. The decoder then determines the actual speed curve, so the speed curve always starts on the values found in VStart and VHigh. Both DecoderPro and the LokProgrammer are aware of this restriction.

This demonstrates the Bachrus console unit for reading the speed when speed matching DCC locomotives. Unfortunately Bachrus is no longer in business.