The Lenz DIGITAL plus System can control 256 turnouts, signals or other devices with the aid of accessory decoders. Each device to be controlled via its number, or address.

The LW100 Tower Cab enables direct access to these devices without entering the decoder's address, by pressing a key. A group of 16 addresses at a time is directly reachable with the 32 keys on LW100. 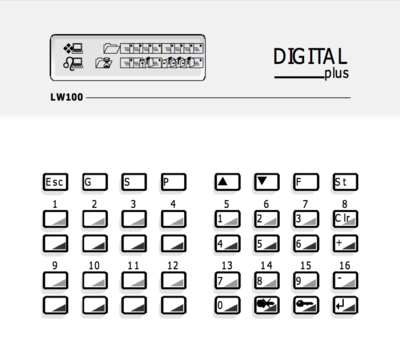 Early models only had German language prompts, Lenz promised a software update which would add English prompts. As the device is obsolete, getting an update may be an issue. The LW100 was released in 1997.

Routes and other settings are maintained when th e power is turned off.

The LW100 in combination with the LI100 can also be used in automating train movements on your layout.

If other addresses need to be reached, simply change the group.

Pressing a red or green key caused the turnout to change alignment of the switch rails.

Sixteen keys were available, further control of up to 256 devices required the use of groups. Pressing an arrow key moved from one group to another. Pressing the G key and one of the turnout keys would jump to that group.

The display can indicate turnout alignment. The value displayed may not be correct if the turnout was thrown by other means. Stationary decoders with feedback will update the display.

An emergency stop command can be sent if required. Turnout and signal control is still possible, and the rails remain energized.

A stop function stops everything and power is removed from the rails.

The LW100 is an XpressNet device. The factory default address is 29. It can be changed.