QSI Solutions, a subdivision of American Hobby Distributors, has been reformed as a stand-alone company.

American Hobby Distributors owner Tony Parisi announced the change Sept. 25. QSI Solutions will now rest under the ownership of longtime manager and product developer Joshua Shedaker, according to a release from the company.

Subsequently QSIS has gone dormant, and the Large Scale decoders are only available on the secondary market.

The current status of QSIS is unknown at this time.

The QSIS website website is still partially functional, but some sound files are missing things such as instruction manuals, etc. You can go to the groups.io forum and get files and software there: [1] 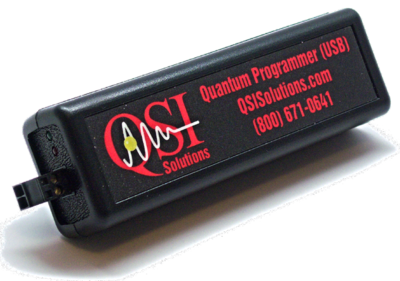 QSI had their own computer interface, the Quantum Programmer which connected to the computer via USB.

For best results, a Programming Track Booster is recommended for QSI decoders.