Summary: Fichtelbahn One Control is a BiDiB enabled accessory decoder 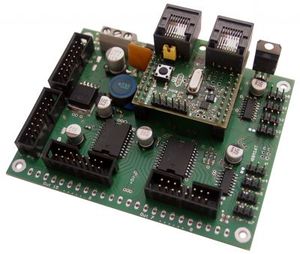 The OneControl is a BiDiB enabled board for servo motor and turnout control. It also provides I/O ports for interfacing with other hardware devices. It can also manage a 16-fold GBM16T occcupancy detector. Advanced configuration of each port is possible via the BiDiB-Wizard software is possible. Also, macros can be programmed on the device to operate multiple output ports under a single command.

It is also possible to create "virtual" accessories, with multiple aspects. In this manner it is possible to configure, for example, a turnout with 2 aspects. Each aspect can be implemented with macros to turn on/off a light and change a turnout coil or servo motor. The model control software would "see" a turnout with two aspects (front and side) each of which would be implemented by the board (via macros) by manipulating its outputs.

Example of a Virtual Turnout

In essence the model rail control software would only operate an accessory with two aspects. This is a very powerful configuration feature that allows complex behavior to be easily implemented.