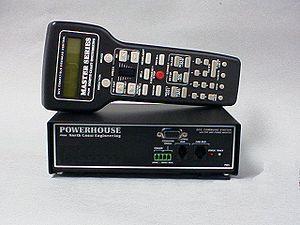 What references this product

Other Command Stations made by same manufacturer

The PowerPro is a complete DCC system with a Command Station,5A Booster and Full featured walk around cab. A 10Amp version is also available. The CS02 is just the command station portion of the PowerPro System and is sold as a upgrade path to NCE. There is no booster or cab included.

127 Advanced Consist are supported per system. 1 "Basic Consist" (old style) of a maximum of 4 locomotives per throttle is supported. Throttles are are all walk-around (not integrated). 5A and 10 Boosters are offered. NCE support "unified" consisting per NMRA and marked as "other". NCE does not support DC locomotives (Zero streatching.)

1) Address: Decoder based where the locomotive are given the same address. Single speed command from a throttle controls the consist. Uses CV2 (Short Address) or CV17/18 (long address)

2) Basic: Command Station based where the command station send multiple speed commands to each locomotive in the consist from a single throttle to force the decoders to act as part of the consist. Decoders have no knowledge they are part of a consist.

4) Unified: Combination of Basic and Advanced.