Summary: Model railroading is a hobby in which rail transport systems are modeled at a reduced scale, or ratio.

Model railroading is a hobby in which rail transport systems are modeled at a reduced scale, or ratio. The modeled world includes rail vehicles (locomotives and rolling stock), tracks, signaling, scenery (roads, buildings, vehicles, model figures and natural features such as streams, hills, canyons, etc.). The earliest forms of model railways are the 'Carpet Railways' which first appeared in the 1840s. Model trains are generally more realistic than toy trains. 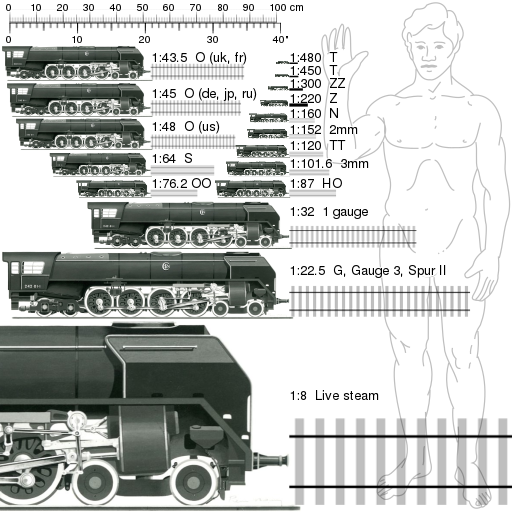 Involvement in the hobby can range from the possession of a train set to spending many hours and large sums of money on a large and exactingly executed model of a railroad and the scenery through which it passes, called a "layout". Hobbyists, called "model railroaders" or "railway modellers", may even maintain models large enough to ride (see Live steam and Garden railroads). Model railroaders may find enjoyment in collecting model trains, building a miniature landscape for the trains to pass through, or operating their own railroad, albeit in miniature. 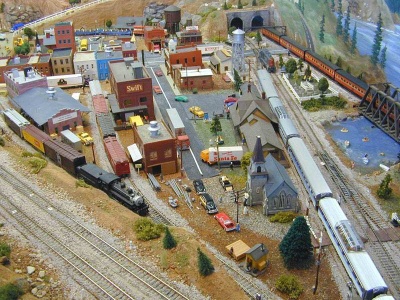 Around the bend, Model Railroad Club of Toronto, O Scale.

Layouts vary from the very stylistic (sometimes just a simple circle or oval of track) to the "absolutely realistic", where real places are modelled to scale. One of the largest of these is in the Pendon Museum in Oxfordshire, UK, where an EM gauge (same scale as OO but with a more accurate track gauge) model of the Vale of the White Horse as it appeared in the 1930s is under construction. The world's largest model railroad track in scale HO is Miniatur Wunderland in Hamburg, Germany, while the largest live steam layout, with over 25 miles (40 km) of trackage is Train Mountain in Chiloquin, Oregon, USA.

Model railway clubs exist where model railway enthusiasts meet. Clubs sometimes put on displays of models for the general public. One rather specialist branch of railway modellers concentrates on larger scales and gauges, most commonly using track gauges from 3.5 to 7.5 inches. Models in these scales are usually hand-built and are powered by live steam, or diesel-hydraulic, and the engines are often powerful enough to haul even dozens of full-scale human passengers.

One particularly famous model railway club is the Tech Model Railroad Club (TMRC) at MIT, which in the 1950s pioneered the automatic control of track-switching amongst hobbyists by using advanced technology for the time — telephone relays.

The oldest known society is The Model Railway Club (established in 1910), based near Kings Cross, London, UK. As well as building model railways, they also have a library of in excess of 5000 books, periodicals, etc.

Model railway locomotives are generally operated by low voltage electricity supplied via the track, but there are exceptions such as radio control and batteries. Today's trains often include miniature computers located inside the locomotives (called decoders) which receive commands from a command station. Check out the Introduction to DCC for complete details.

Most of the early models made for the toy market were powered by clockwork and controlled by stop/go and reverse levers on the locomotive itself. Although this made control crude the models were of large enough scale and robust enough that grabbing the controls as they ran around the track was quite practical. Various manufacturers also introduced slowing and stopping tracks that could trigger levers on the locomotive and allow reliable station stops to be performed. Other locomotives, particularly large models, used actual steam generated in a boiler using a heat source such as a liquid or solid fuel. Steam or clockwork driven engines are still sought by collectors.

Early electrical models used a three-rail system with the wheels resting on a metal track with metal sleepers that conducted power and a separate middle rail which provided power to a skid under the locomotive. This at first apparently strange arrangement made sense at the time as the majority of materials used for railway models were metal and conductive. Modern plastics were not yet available and insulation was therefore a significant problem. In addition, the notion of accurate models had yet to evolve and toy trains and track were generally crude tinplate representations of generic models.

As model accuracy became more important some model systems adopted two rail power where the wheels were isolated from each other and the two rails carried the positive and negative supply or the two sides of the AC supply. Other model systems such as Märklin instead used a set of fine metal studs to replace the central rail, allowing existing three rail models to use more realistic track.

Although DC power with the positive and negative charges on the two rails is the most common method of power, Märklin and Lionel use AC power on the three-rail system. American Flyer is another exception, which used AC power on two-rail track.

The sugar-cube sized electric motor in a Z scale model locomotive. The entire engine is only 50 mm (2") long.

Early electric trains ran on battery power, as few homes in the late 19th and early 20th centuries were wired for electricity. Today, inexpensive train sets running on battery power are once again becoming more common, but these are generally regarded as toys and are seldom used by hobbyists. Battery power is also used by many garden railway and larger scale systems both because of the difficulty in obtaining reliable power supply through the rails when outdoors, and the high-power consumption and thus current draw requirements of large scale garden models is easily and safely met with lead acid batteries.

Live Steam locomotives are often built in large gauges (up to 7.5" track gauge or even larger), and are also readily available in G scale, 16mm scale and can be found in O and HO scale. Hornby Railways produce a live steam locomotive in OO scale, development of work by some very dedicated modellers who hand-built live steam models in HO/OO, OO9 and N, and there is even one in Z in Australia.

Occasionally the topic of internal combustion (IC) models, patterned after real-life diesel-electric locomotives, comes up among dedicated hobbyists, but these locomotives are not commercially available. Large scale IC-mechanical and even IC-hydraulic models are commercially available but these are unusual and significantly pricier than the more usual electrical power.

The first clockwork (spring-drive) and live steam locomotives simply ran until they ran out of power, with no way for the operator to stop and restart the locomotive or to vary its speed. The advent of electric-powered trains, which first appeared commercially in the 1890s, allowed one to control the train's speed by varying the current or voltage. As trains began to be powered by transformers and rectifiers more sophisticated throttles appeared, and soon trains powered by AC started containing mechanisms that caused the train to change direction and/or even go into a neutral gear when the operator cycled the power. Trains powered by DC can change direction simply by reversing polarity.

Electric power also permits control by dividing the layout into electrically isolated blocks, where trains can be slowed or stopped by lowering or cutting the power to a block. Dividing a layout into blocks also permitted operators to run more than one train on a layout with much less risk of a fast train catching up with and hitting a slow train. Blocks can also trigger signals or other animated accessories on the layout, adding more realism (or whimsy) to the layout. Three-rail systems will often insulate one of the common rails on a section of track, and use a passing train to complete the circuit and activate an accessory.

In the large scales the use of radio control has become popular, particularly for garden railways. 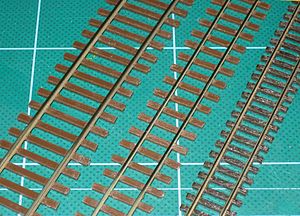 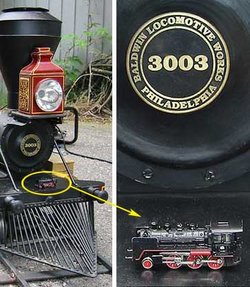 One of the smallest (Z scale, 1:220) placed on the buffer bar of one of the largest (Live steam, 1:8) model locomotives. 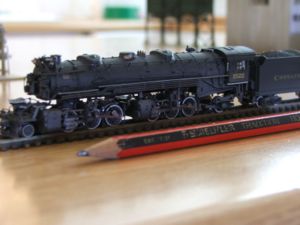 The size of the engines depends on the scale being used. The four major scales used are: G scale, O, HO (in Britain, the similarly sized OO is used), and N, although there is growing interest in Z. Engine sizes can vary from around 700 mm (28") tall for the largest ridable Live steam scales, down to matchbox size for the smallest ones in Z-scale. A typical HO engine is around 50 mm (2") tall, and 100 mm to 300 mm (4" to 12") in length.

G scale, because of its larger size. is often used for outdoor modelling. It is easier to fit a G scale model into a garden landscape and still keep the scenery proportional to the size of the trains running through. O, HO, and N gauge are more delicate due to their size and are used more often indoors.

The words Scale and Gauge seem at first to be used interchangeably in model railways, but their meanings are different. Scale is the model's measurement as a proportion to the original, while gauge is the measurement between the two running rails of the track.

At first, model railways were not to scale. Manufacturers and hobbyists soon arrived at de facto standards for interchangeability, such as gauge, but trains were only a rough approximation to the real thing. See NEM and NMRA. Official scales for the various gauges were soon drawn up, but the scales were not at first at all rigidly followed, and were not necessarily correctly proportioned for the rail gauge chosen. O (zero) gauge trains, for instance, operate on track that is too widely spaced, while the British OO standards operate on track that is significantly too narrow. Most of the commercial scales also have standards that include wheel flanges that are too deep, wheel treads that are too wide, and rail tracks that are too large.

Later on, groups of modellers became dissatisfied with these inaccuracies, and developed finescale standards in which everything is correctly scaled. These are used by dedicated modellers but have not generally spread to mass-produced equipment in part because the inaccuracies and overscale properties of the commercial scales are necessary to ensure reliable operation in the hands of consumers as well as experts, and also to allow for shortcuts necessary for cost control.