It is the custom to reward DCCWiki contributors for hard work and due diligence by awarding them barnstars. To give the award to someone, just place the image on their talk page, and say why you've given it. Don't hesitate: be bold!

The concept of the barnstar as a DCCWiki award was created by SunirShah on MeatballWiki. The concept has since been imported into DCCWiki. 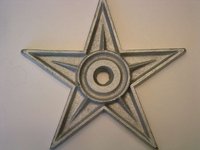 A barnstar is a decorative motif found on barn structures in the United States and Germany.

Originally a decorative form of wall anchor, barnstars were also meant to represent the mark of the builder; over time, however, they became more frequently used for aesthetic purposes. They are most popular today after the American Civil War.

Barnstars are seen not only on barns, but on many older buildings, often of brick. A long steel rod is passed entirely through the building; a star on either side is threaded onto the ends of the rod and they are tightened. This helps to keep the structure from collapsing. A heavily starred building should be examined for failure of the mortar, and may require tuckpointing or more drastic repairs.

Today, in the Pennsylvania Dutch area, barnstars are known as hex signs but no rods go through the center. Some hex signs still incorporate the star.

Barnstars are very commonplace in pre-war Richmond, Virginia on large buildings such as factories.

Some wiki communities (notably Wiki and MeatballWiki) have adopted the barnstar as a symbol of good work, specifically in relation to the metaphor of barn raising as representing collaborative effort toward a common goal. The idea is that a user can be "awarded" a barnstar by the image being placed on the page associated with that user, and thus thanked for their work toward the community.

The following are the barnstars and awards currently in use, in order of creation.