Summary: Converting your layout to DCC

This article describes the steps for converting your layout from Analog (Direct Current) to Digital Command Control. Remember, converting from analog to DCC can be costly and time consuming - but it is very rewarding once you have done so. Upgrading locomotives with Multifunction Decoders can be completed at your own pace. The track wiring needs to be done all at once since you cannot run Analog and Digital Command Control at the same time. 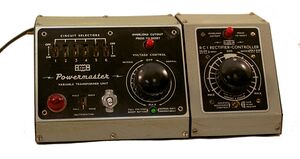 This article assumes that:

The Basics of Converting to Digital Command Control

For small layouts simply disconnect the analog power pack and hook up the two wires to the DCC system's booster. It should be noted, that this is the most basic way to get your track running on DCC. 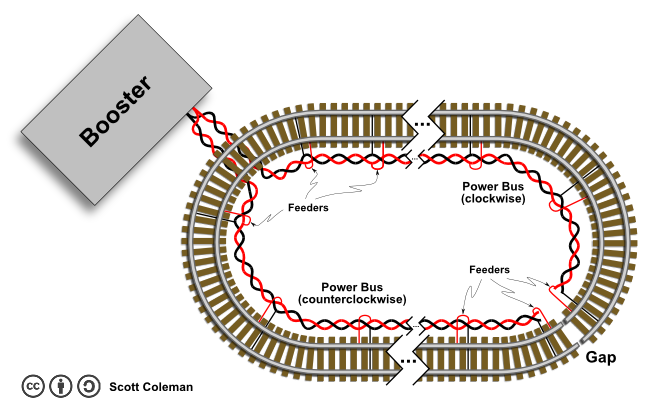 If the layout uses multiple power supplies, the conversion is a little more complex. A power bus will be needed to connect the booster to all the points previously supplied by the individual DC power supplies. All DC power supplies must be disconnect to avoid the risk of damaging your new DCC system.

Go back through your layout's track work to ensure your booster detects shorts, and if you have any reversing loops, that those are handled properly. This is easily done with the Quarter Test.

If you're impatient and want to get your locomotives running on DCC before you've converted them all you can set up your layout for Mixed DCC and Analog Operation.

Unlike classic direct current systems, the Digital Command Control booster delivers a lot more power, from five to eight or more amperes of current. Compared to the typical direct current (or Analog) setup using multiple power supplies with a maximum output of one or two amps, this is a lot more power. A short can do a lot of damage quickly.

When converting to DCC, the first and most important thing on the list is to verify that the wiring is capable of handling the increased power capacity you will have. Light gauge wire is not up to the task!

As a rule of thumb, the main source of power to the track, the TRACK or POWER BUS, should be at least 14AWG. Bigger is always better! For drops to the track, 18 to 22 AWG is sufficient. Short lengths of a lighter gauge wire will also be adequate if you need them to connect your track bus to the booster. Please note that the larger scales, like "G" can need significantly larger wire gauges, 12 to 10 gauge is not uncommon as 10 to 20 ampere boosters are often used.

Many older layouts were wired in stages using a variety of wires and techniques, with many splices and connections. This can make troubleshooting difficult, and if doing an upgrade, replacing the wiring is probably a better option.

Sloppy wiring practices lead to new problems, like poor operation, burnt out decoders, short circuits causing damage and even runaway locomotives. So it is better to rewire the layout, document what you are doing, and use adequate wire for the task.

You will see numerous claims that 14AWG wire is overkill and unnecessary. The reality is that it is a Best Practice. There are three things to remember: This is not Direct Current, it is not 60 Hertz, and the DCC waveform doesn't behave like them.

For added insurance, test your track wiring using the Quarter Test. If it fails, find the problem and solve it.

In the early days of Digital Command Control the ability to run both Digital and Analog simultaneously was considered to be important. Many would have forgone the improvements that DCC could offer if they suddenly couldn't use any Analog/DC equipment. Devices designed to cut out if the two worlds met were available, most have been discontinued due to lack of interest. Today this is not an issue, with low cost decoders available and locomotives with a decoder installed available at the hobby shop.

The two control methods should never be connected at the same time. An oversight can do a lot of damage when the high current DCC signal is accidentally connected to the DC trackage by accident. If there is a desire to use analog control, create a single connection point where your DCC or Analog control system can be connected, and only one can be in use.

Some DCC accessory devices such as Auto-Reverse units used with a reverse loop can be damaged if exposed to a DC voltage. Is it worth the cost to by forgetting to remove them from the circuit during conversion to Analog operation?

While you can disconnect your analog throttle/power pack and use it as a power supply for your DCC System, as a rule it is only a temporary solution. The typical power supply used for an analog layout (or your power pack) will not have enough voltage for satisfactory operation, nor can it supply enough current to be of any real use.

Obtain a power supply with the voltage and current ratings appropriate for your system. Check your owners manual for recommended power supplies, or the minimum and maximum voltages, and whether you need a Direct Current (DC) or an Alternating Current (AC) input. In some cases, either will do. For current, you should have at the minimum the current rating your booster is capable of. Larger high current power supplies can be an unnecessary expense. A few amps extra isn't an issue. Using a high current booster meant for large scale locomotives can be a potential disaster with smaller scales.

This can be tricky with DCC. If the entire layout is wired as one single electrical circuit, or Power District, everything should be fine. Best to be avoided. Also becomes an issue with reversing loops or tracks that cross each other. Common Rail wiring is best avoided.

This is the equivalent DCC term for blocks used with Cab Control and other methods of running multiple trains. Their advantage comes from the use of power management devices, which also have circuit breakers in them. This allows for electrically separate sections of track (districts), and should a short occur only that district is affected. All the trains in the other power districts keep running as if nothing has happened.

Phasing is very important when using multiple boosters. Each booster shall have its own isolated segment of track, called a Booster District.

To verify phasing, a simple DMM on the AC Volts Range will suffice: Place one probe on either side of the gap and read the voltage between the two booster districts. It should be Zero. If there is a significant voltage, the boosters are out of phase. When a locomotive bridges the gap between districts, the boosters will start to cycle endlessly if they have Auto Reverse capability. To prevent that, disable the auto reverse function. Then one will shut down. Correcting the signal phase relationship between the two will prevent that from happening.

Connect a heavy gauge return wire between the boosters, as per the manufacturer's instructions, so that return currents can pass through this route instead of your throttle network wiring.

A reversing section is created with the track loops back onto itself, and what was the right rail becomes the left rail. These are dealt with using manual means, such as a switch, or automatically using an Auto Reverser. In either case, gaps must be cut in the rails to eliminate shorts on both sides of the loop. The loop must be large enough that the entire train will be within the boundaries created by the gaps.

See the page on Reverse loops for more details on how to implement them.

See the page on Turnouts for more details.

One of the more troubling issues. The Switch rails must not be electrically connected together. If so, a metal wheel can bridge between it and the Stock Rail, causing a short. Many older turnouts were constructed that way. As DCC systems are much more sensitive to shorts, this will cause problems.

Most, if not all commercial turnouts are DCC Compatible, issues that arise are usually mechanical in nature and easily corrected. Power routing turnouts can cause problems if the point rails are not isolated from the downstream track, allowing the two phases to short.

One way to avoid this is to use a DCC Friendly Turnout, or modify those that can be modified to eliminate this issue.

If you have a functioning signalling system, some consideration is needed here. For DCC, a complete rethink and reconstruction may be needed, but if it uses optical methods independent of the track, there should not be too many issues. 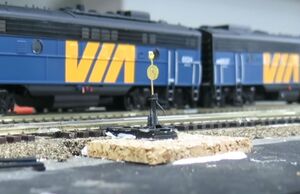 Accessories, like turnout motors for animation and switches can be hooked up to accessory decoders. This allows you to control your switches and animation through the DCC system.

One of the first steps is converting all the locomotives you wish to run on the layout to DCC by installing a multifunction decoder. This is another advantage of DCC: The multifunction decoder offers total control of the vehicle's performance, which can be custom tailored to your needs.

You don't have to convert your entire fleet, and probably won't. Choose the ones you want to run, and expand the DCC Equipped fleet over time. Some locomotives will be difficult to convert, those can be sent to the display track or sold off, much like a real railroad does.

Analog Conversion is useful if you install decoders but don't have a DCC system in place yet. Later, when you have completed the conversion, consider switching the decoders to NMRA Digital Only operation, to prevent runaways.

The DCCWiki has a number of curated videos available.

These videos may be helpful: