Summary: This article discusses the concept of adding sound to your model railroad. There are several ways of doing this with Digital Command Control.

Modellers who have added sound to their layout generally agree that the addition of realistic sound adds new dimensions and depth to your model railroad layout and its trains. Just like technologies like BetaHiFi and VHS HIFI gave not only stereo but better sound, later enhancements like Dolby Surround allowed the transition from watching a rented movie in your living room to today's sophisticated home theatre systems.

For some, having sound for the layout is unneeded, while others believe it's detrimental to have realistic sound around the layout. Fortunately, for those who just can't live without sound, today's small electronics are capable of producing sounds that actually sound like trains.

On Direct Current layouts one needed to place small speakers around the layout, and a computer calculates where trains are, and determines which speaker to send sound to using complex electronics. DCC and miniaturization of multifunction decoders allows the sound to actually be generated within a locomotive and rolling stock. This latter method is by far the most interesting and realistic and manufacturers are now fitting sound decoders in their manufactures. Many DCC sound decoders will give limited sound availability when operated on DC.

Without a doubt, it is the sounds of the locomotive and train that DCC brings that have revolutionized the model train sound market. This enables you to add the ultimate in sound to your operations. It is the programmability of DCC Decoders that has made bringing sounds to the layout easier.

Most sound files are constructed by using recordings of real locomotives and adapted to the limits of the decoder's flash memory. You will need some source sounds. 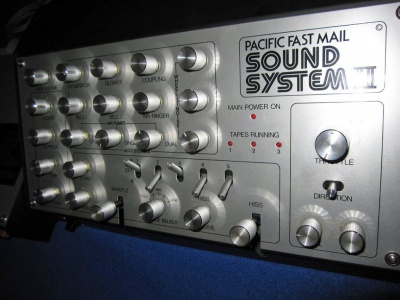 Sounds around the layout can add a bit of realism. For example, simple bell sounds at a grade crossing can make a simple layout come alive. Adding the sound to a sawmill or the animals on a farm can further increase the realism of any layout. One could even add station platform sounds to start when the train arrives and stop or fade out when the train leaves. These sounds are available on pre-recorded modules or can be recorded for your own use.

There are several methods for adding 'static' sound to your layout. They include "Through the rail", and sound modules linked to other events.

You can also buy sounds for editing into sound projects.

You will need sound editing software. There are many free and commercial programs which you can use to modify audio files. You can start with NCH - Switch which offers a free trial period, paired along with Wavelab, a good combination. At the end of the free trial buy the Switch product. It is cheaper than Wavelab but removes the pop up 'buy now to continue' messages. Be aware that the free version of Wavelab does not have full features. I have also tried Magix Audio Lab bought retail. Good programme but not as easy to use as Wavelab and when you use special effects it creates a separate file for those which does not download to the decoder. This latter has made me wary of these effects, hence the basic version of Wavelab but I am informed that other programmes such as Sony Soundforge do allow downloading worked files. Probably the only feature that I would like is Fade in and Fade out.

How you edit sound files will be the subject of a separate page at a future date. Trial and error of any results of editing is the best method. Sound is subjective. What sounds right for you may not be for someone else. For steam, chuff rate and that syncopated chuff tweaked to give the right number of chuffs per wheel rev at slow speeds does it for some and in sequence for the number of cylinders that the prototype has. In British steam one needs two, three and four cylinder chuff sequences. Don't be fixated on prototype for actual sound but don't be afraid to put a softer chuff in a shunter as opposed to a bark in an express loco pulling a lot of coaches.

Diesels present a different set of problems in that the engine itself is not, in most cases, directly driving the wheels. Thus the engine can be heard to change revs (not violently but noticeably) without the train actually changing speed. This is called 'notching' mainly because the real thing has speed steps on the throttle. This effect is very hard to duplicate in a decoder. The most noticeable change is on pulling away. The engine note rises and the train slowly gathers speed. This is best effected in a decoder by adjusting the acceleration and deceleration CV's so that a twist of the throttle gives increased revs sound but delayed movement. Each decoder is different and much experimentation will be needed to acheive a good sound. This is one sound which is best NOT recorded from a stationary trackside position. The Doppler effect is much more pronounced with diesels.

Whistles and horns are important and should be close to prototypical as possible. Not all decoders/command stations support the 'playable' F2 whistle. This feature requires the splitting of a whistle sound into three parts and is not easy to do well but is a delight when it works. If F2 play is not available you will need to record a long whistle and a short one. Here it is vital that you use both sounds from a prototype on the same recording or that you are able to construct such files in your sound editor.

Diesel horns tend to be generic and one recording fits all. Two tone British horns can be varied and it is not too difficult to give a playable horn where the low note can be held and the following high note is left at a fixed shorter length. American multi tone horns can be played almost endlessly on F2.

Most decoders use eight bit monaural sound files in .WAV format. Make sure that your sound source is converted to the correct format. Always store your sound files either recorded or downloaded in the highest possible format so that future chip sound management upgrades do not render your working sound files obsolete. It is preferable to store the files in the format that it was downloaded in. Sound files on the Internet should not be used unless they are at CD quality or better (44KHz 16 bit stereo), this is because you are downgrading the file so much that if the sound is not on the original recording, the quality will be worse than if it was.

Best results seem to come from MP3 files on pre-recorded Compact Discs or camcorders with good microphones attached. Compact Discs have the advantage that, in most cases, the sound file can be copied, worked with and downloaded to a sound decoder leaving the original intact for future use.

Lastly, remember that sound played on YOUR layout will sound completely different on someone else's and that sound at exhibitions that comes over as quiet but is noisy when played at home. Make sure you know which CV controls volume. Bad sound is an abomination and makes you ill. Good sound attracts admirers and compliments.

Without doubt the secret to good mobile sound decoders is the ability to make them all sound different.

This is done by loading your own sounds or buying decoders from different manufacturers and tweaking their CVs, or installing cams on driving wheels.

The secret to a successful install is the speaker install. Some form of speaker enclosure is essential whether supplied or home made. This enclosure ensures that the sound from the front of the speaker does not mix with the sound from the back thereby cancelling both. This gives the sibilant hissing which destroys the sound project completely. Very often the supplied speaker is not all that good size-wise. For example, some say that for a British 00 locos, they generally avoid speakers above 23mm for tender fit and above 20mm for boiler fit. You may also find that speakers smaller than 18 mm give poor results soundwise. There is only one exception which is the small oblong speaker supplied with CT SL74's although the greater dimension is close to 20 mm even for this minute speaker. It is available separately from Lokshop but is expensive and only 8 ohm.

Speaker Impedance is important but not as sensitive as first thought. Do not operate below 50% of the specified speaker impedance and watch the power rating being below half a watt. More than one speaker is good and, if there is space, up to three is even better. This means that an ESU sound decoder could have three 32 ohm speakers fitted in series which are both readily available and smaller than those supplied. One exception is the LokSound Micro speaker which is oval in an oblong mounting. If no enclosure is supplied you will need to make one.

It is accepted that diesels are relatively easier for speaker installs but for 00/HO look for 23mm or less.

Sound sources for mobile decoders are legion and readily available but you may find them useless for use in the decoder. Recording your own is a possibility but you will need a location, little or no background sound and a sympathetic driver who understands what you want and can deliver it. There are some generic sounds to locomotives depending on where you are continent wise and where your intended modelling area is. The US diesel market for pre recorded on board sound is very well served and it is relatively easy to buy a model and matching sound decoder in that market.

Please note, some manufacturers offer decoders which allow the user to load their own sound files, or offer a selection you can download and transfer to the decoder. Some cheap low end decoders may also have poor motor circuits which can put a dirty signal on the motor, resulting in an unwelcome and distracting buzz from the motor.

Speakers:- Apart from the decoder manufacturer supplied speaker I have only found two suppliers of speakers Mouser Speakers for the USA and Lokshop for Europe.

Mobile sound decoders come as a combined motor and sound or sound only for piggybacking an existing motor decoder. Wiring of the former is exactly the same as an ordinary decoder except for an extra two wires (usually brown) for the speaker. The sound only decoder usually has red and black wires to attach to the track connections as per the motor decoder and the same two speaker wires. Digitrax sound only SFX064D is the exception in having about 19 wires sprouting from it! The trick with sound only decoders is getting the two decoders in synch as it were. Then you give them both the same address. All sound decoders have CV's running way over 100 and programming these is difficult unless one has DecoderPro and a well written decoder definition file. Also see Decoder Lock