DCCWiki, a community DCC encyclopedia.
Jump to: navigation, search
Short Definition
The Booster is an electronic device that takes instructions from the Command Station, and creates the digital signal supplied to the track.

Many Digital Command Control systems integrate the command station and booster into one package. For this definition, the booster is a separate device which requires instructions from an external command station.

What Does a Booster Do?

Think of a component audio system.

You have in input device, such as a tuner or CD player. By itself, it cannot provide enough power to drive a speaker. The input device is connected to an amplifier, which boosts the low-level signal to an amplitude sufficient to drive a speaker. The booster functions as the amplifier, taking the logic level (low voltage and current) signal from the command station and amplifying it to drive the track. 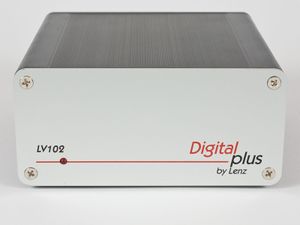 The booster is sometimes referred to as the "Power Station". Since the booster contains no intelligence (non-thinking), it can be thought of as the "Pack Mule" of a DCC system as it is responsible for combining the intelligence from the command station with the power from the power supply. Some boosters may not have autoreversing, where others do.

Boosters are responsible for the following tasks:

A booster may also feature:

You might think it's best to have a single, large, booster/command station to power your entire layout. However, you will soon learn, it's typically best to have a couple of smaller boosters distributed around your layout. The reasons include: Additional trains, reverse sections, and to isolate derailments. On a larger layout multiple boosters keep the power bus runs manageable.

Boosters are available with opto-isolated inputs, if that feature is required. The picture below shows one booster with a sticker stating "opto" on it.

A booster is rated for amount of current it is capable of delivering to the track. If you demand more current than it can supply, it will simply shutdown.

If you notice the trains are starting to slow down when multiple trains are running, that's a sign you are reaching the limit of your booster - it's time to add additional boosters.

Typical boosters deliver 4 to 5 amps, and can be as high as 10 amps. This may be enough to run a train or two in the garden, or almost a dozen HO or Z scale trains.

Sooner or later, a train will derail causing the booster to go into protection mode.

Once this happens, all trains using that booster will come to an immediate stop. If you want to prevent a derailment, say in a switching or staging yard, from stopping all the trains on a layout, power these sections with a separate booster. This way, if someone accidentally shorts the tracks while putting locos on the tracks, the rest of the layout will continue to operate.

There are alternatives for adding boosters to get the above listed features, except for adding a booster for additional power.

If all you need to do is isolate a small section of track, or run one or more Reverse sections, then you can use power management modules from various manufacturers.

These modules typically go between the booster and the section of trackage (power district).

For example, a reversing power module would connect between the booster and a reversing section, but the rest of the track is still powered directly from the same booster. The moment a wheel connects between rails of different phase, the reverser springs into action and makes them both the same phase. A typical application would be a reverse loop.

Some power management modules can take a single or multiple inputs, and provide multiple outputs. This splits up your layout into several power districts using a single booster.

DCS100 Command Station with DB200+ Booster in use on a modular layout.

To add additional boosters, you must electrically divide your layout into two booster districts, connecting the original booster to one district and the new booster to the second district. The booster may need a separate power supply, and must be connected to your DCC system's throttle bus. By connecting the booster to the throttle bus, all boosters on the layout will send out the same commands to all sections of the track. This allows trains to receive commands, even if they are crossing between booster districts. Never connect two boosters to a common section of track, as this can destroy them if one goes out of phase.

Whereas a power district is one of several districts fed through a power management device by a single booster, a single district fed exclusively by one booster is called a booster district.

Suggestion: Double gap the tracks to fully isolate the boosters. That is, both rails need to be cut at the same spot. Lack of gaps creates a short if one booster district goes out of sync with the others.

Do not wire boosters in parallel. This will lead to melted plastic and fried boosters. You cannot wire them in parallel. You must connect separate sections of track (power districts) to separate boosters.

Caution: Read and follow the manufacturer's directions for the booster and your DCC system on how to properly wire an additional booster.

This "ground" is not the same as the ground provided by your house wiring. Never tie the low voltage side of your DCC system to house/earth ground.

See the instruction manual for instructions on connecting the booster, and any additional boosters. It will also illustrate how to connect the input signals to the booster. Since the booster only requires a low level data signal to operate, it is possible to incorporate boosters from other manufacturers into your DCC system.

For reliable operations, be sure to follow the recommendations on the wiring page when connecting your booster to the power bus.