Summary: The heart and brains of the Digital Command Control system. Listens for commands from throttles and other devices, processes them, and sends the resulting digital data to the booster. 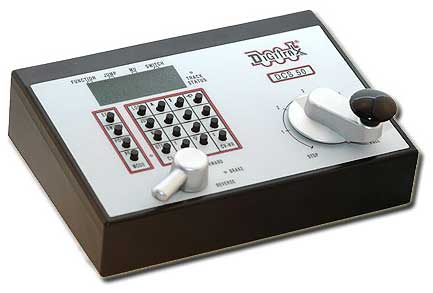 Command Stations are the heart of the Digital Command Control system. They receive commands from a throttle network (such as Digitrax's Loconet or Lenz's ExpressNet), process them, and decide if it needs to make a standardized DCC packet to send to the decoders on a Digital Command Control system. They don't do the actual work, they tell other things to do the work. The digital data packet is sent to the Booster, which creates the DCC signal imposed on the track.

What is a Command Station?

The command station listens for commands from throttles and other devices, processes them, and sends the resulting instructions to the booster. The booster modulates power from the power supply with the digital data stream from the command station. The resulting output is a completely digital signal applied to the track. On the track are locomotives, with their decoders. Other stationary decoders, like switch motors and crossing gates, may also be connected to the track to receive commands.

The command station can be the limiting factor of a DCC system. It is responsible for keeping track of which trains are controlled by what throttle. They are also responsible for a host of other items, such as interpreting additional functions sent by the throttle.

Command stations vary from manufacturer to manufacturer, offering different levels of features. Differences may include the number of slots for running trains, range of functions supported, upgrade or expansion possibilities, output current (expressed in amperes) available to the track and the total number of throttles supported. Make sure you understand what you are getting, so you will not be disappointed or overwhelmed with capabilities. Keep in mind you do not have to use all the features of a command station to get a basic layout up and running. It's easier to not use functions and features than it is to add these later on - adding features usually requires a new command station!

Note that in most cases, Command Stations offered by various vendors are incompatible with each other.

The command station is able to transmit between 150 and 200 packets per second to the decoders. You might be asking "Is that a lot?" Let's put this into human terms.

Let's say there are 10 decoder-equipped locomotives on the track. Each decoder will receive data packet addressed to it 15 to 20 times each second. This is important because in the absence of a packet bearing its address, a loco will continue doing what it was doing...indefinitely. If a packet of information is corrupted for some reason, it simply takes roughly a tenth of a second longer for the locomotive to respond to the change. Most people will be unable to tell that an error took place in such a short amount of time.

The software in the command station can also optimize transmission rates, by prioritizing packets. This minimizes lag when a large number of locomotives need to be handled in a timely manner. Addresses with no change in status are transmitted less frequently so that addresses with changing data can be handled quickly. For example, a mainline freight with the highball compared to a shunting engine, one has little changes to the throttle, the other has many.