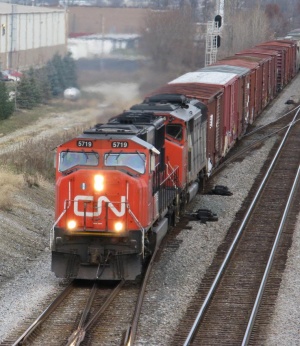 Ditch Lights are small headlights mounted on the pilot, designed to illuminate the portion of the right of way not normally illuminated by the headlight beam.

First appearing in Canada, it was noticed that when the ditch lights were on while approaching a road crossing the ROW, motorists assumed the train was closer and didn't attempt to beat the train when crossing the track. After investigating their effectiveness in reducing collisions with automobiles, regulations were drafted requiring the ditch lights be illuminated whenever the train approaches a level crossing.

In time this practice was adopted in the United States.