Summary: Kapton® (polyimide) tape is used to hold wires in place when installing a multifunction decoder.

Kapton® is a trademark of DuPont. 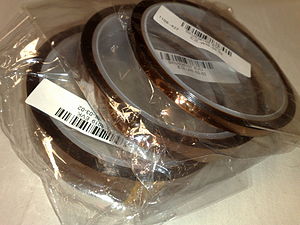 Kapton is a Polyimide film developed at DuPont in the 1960s. As it is stable over a wide range of temperature, it has found many uses. It has good dielectric properties as well as high thermal conductivity, making an ideal material for electronic applications.

In DCC, it is useful to secure decoders. It is very thin, yet strong. Polyimide tape with its silicone adhesive can attach decoders and wires to the locomotive frame. The adhesive does not ooze out over time, like cheap vinyl (electrical) tape. It is stronger and cleaner than the typical vinyl electrical tape sold in many stores. Being thinner also means less problems with clearances and binding. Polyimide does not withstand mechanical wear very well.

These properties make it idea for fixing wires in place, as well as securing the multifuntion decoder during installation. Do not wrap the decoder, as this may lead to overheating.

It is used extensively in the semiconductor and electronics industry due to its high temperature tolerances, especially for masking circuit boards during wave soldering operations. It is durable enough to remain during the entire production cycle, often being present on consumer goods in their final form.

Compared to black vinyl electrical tape, it is very expensive.

Polyimide tapes can be sourced from any electronic supplier, as well as some hobby shops which specialize in DCC.