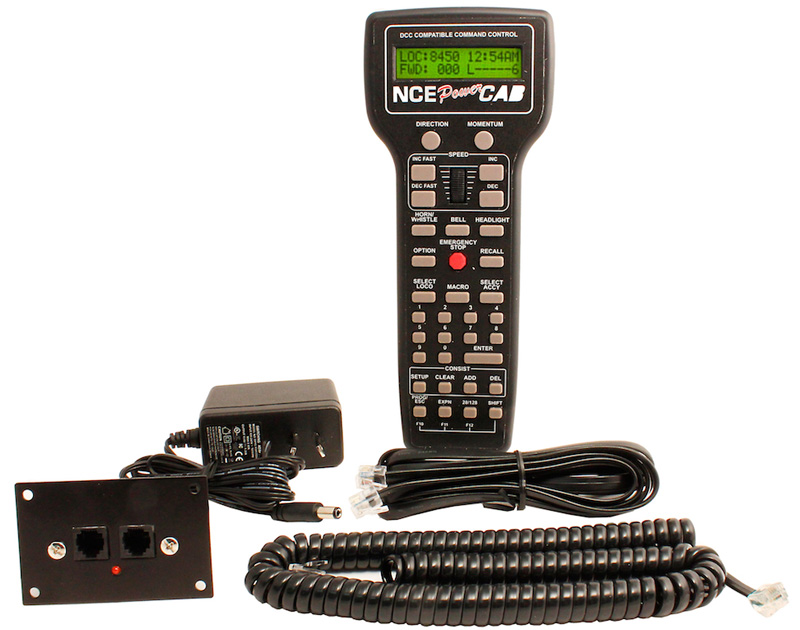 The system consists of a single unit that combines the functions of a cab, command station and booster. There is an external 'wall wart' type power supply that provides 13.6v DC to power the system, necessary cables for the Power Cab and second throttle, and a control panel that the Power Cab, power supply, optional second throttle and additional NCE UTP panels for remote connection of the second throttle.

The Power Cab Panel is the main interface point between the layout and the Power Cab. The Power Cab must remain plugged into the PCP for the system to work, as the Power Cab has only one DCC output. (See Smart Booster below).

RJ12 6P6C cable used between the Cab Bus and the Power Cab.

This cable carries track power and the Cab Bus. NCE's recommendation is to purchase a replacement cable from them, as third party cables will lack the heavy gauge conductors that are needed by the Power Cab.

The Power Cab system can support one additional cab. This cab must be set as cab 03. Any NCE or compatible cab may be used. It the optional USB interface is used, it counts as the additional cab.

The SB5 Smart Booster (5 Amps) The Power Cab when used with the SB5 can be unplugged and used in true walk around fashion. It no longer needs to remain connected for the system to work. Up to 6 cabs can be used with the SB5. Additional 5 Amp boosters (DB5) may be added to the SB5 for even more power handling on larger layouts.

The Auto SW monitors the DCC track bus, When it detects the DCC Packets used to initialize Service Mode (programming) it will disconnect booster power and connect a dedicated programming track to the system. It will also change modes if a computer is used for programming.

NCE UTP Cab fascia panels can be used to provide remote locations for attaching the second cab. Note that the Power Cab itself must remain plugged into the PCP panel.

Radio Base Station (RB02) and any other radio equipped cab are required.

The Power Cab set is not available with a Radio feature. This must be purchased separately.

Add the 5A PH Pro, up to 63 cabs! Set up the Power Cab as a programming station (isolated from layout). Change the SB5 to Dumb booster mode to power a 5amp power district.

After reseting a decoder to its factory default, select address 3, not 0003. The system sees an address with leading zeros as a long address.