Voltage and Current are electrical quantities that describe the potential (voltage) and the flow (current).

Voltage is often shown as E or V, and the unit is volts. It is measured with a voltmeter.

Current is shown as I, the unit is Amperes (or amps). It is measured with an ammeter.

Ohm's Law describes the relationship between voltage and current in a circuit. The resistance of a circuit is determined by dividing the voltage by the current (E/I = R). Resistance is measured in ohms, the symbol is the Greek symbol Omega (Ω), and is measured with an ohmmeter. Ohmmeters are never used on energized circuits!

Ohm's Law describes how things will happen in a circuit, or is used to determine the quantities you should measure. This is useful for troubleshooting. 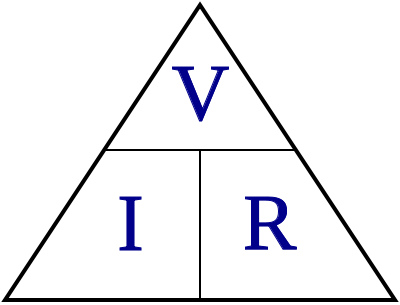 The picture shows a series circuit and a parallel circuit. This is how voltage and current are related in such circuits:

The current flows single file through both light bulbs, and the light bulbs have the same resistance (we are assuming the bulbs are identical). Ohm's law tells us that I = V / R, or V = I · R, and since the current I and the resistance R are the same for both bulbs, the voltage V on each bulb is also the same.

Since the supply voltage is 12 V, that means there is a voltage of 6 V on each bulb.

The electrical current flows from the power supply to the junction that leads to 2 identical light bulbs. The bulbs are identical, and they are both connected to the 12 V of the power supply. The missing piece of the puzzle is the current flowing through each bulb. Ohm's law tells us that I = V / R. Since the voltage V and the resistance R are the same for each bulb, the current I flowing through each bulb is also the same.