Electrostatic Discharge (ESD) is an important issue in the electronics industry today. The integrated circuits used to create DCC Decoders and other items are sensitive to static electricity, and can be damaged or destroyed by a static electricity discharge. Proper precautions during handling and soldering are very important. Static discharge will shorten the lifespan of electronic devices, leading to erratic operation or failure.

This symbol means the device is static sensitive.

Part of a series on Soldering

For vacuum tubes, ElectroStatic Discharge was not an issue, later with transistors it was not considered to be a problem either. MOSFETs (Metal Oxide Semiconductor Field Effect Transistor) arrived in the mid-1960s beginning the MOSFET Revolution. When their failure rates began increasing it was discovered that the buildup static electricity during handling damaged the metal oxide layer in the device, causing it to fail. In response to ESD, manufacturers of semiconductors and manufacturing equipment invested time and money to protect against the effects of static electricity. This is reflected in lower failure rates and increased long term reliability.

Digital Command Control devices are sensitive to static, especially multifunction decoders. With advances in electronics technology came a new threat: Electrostatic Discharge, which can easily destroy the transistors and connections within those amazing electronic devices. Awareness of ESD and how to prevent it will increase your enjoyment of DCC in the future.

Manufacturers of DCC Decoders report many failures are as a direct result of damage by Electrostatic Discharge.

Taking precautions to avoid ESD while installing and handling electronic devices goes a long way. Proper handling, including an ESD Safe workbench and ESD Safe soldering equipment will prevent damage to decoders during installation. Even the audio section of a multifunction decoder is at risk. Cold, dry winter days are especially dangerous with respect to generation of static electricity.

What is ElectroStatic Discharge?

When dissimilar materials rub together the friction results in a positive (triboelectric) charge on one surface and a negative one on the other. The charge will remain unless it has a path through which it can flow. The resulting charge can remain in place for some time and this is "static electricity". When a path does exist current will flow and the charge will be reduced or dissipated.

The levels of voltage and current produced depend of a variety of factors. The size of the person, clothing and other materials, the amount of activity, the object the discharge is made to, and humidity. The factor which affects the voltages produced is the materials being rubbed together. Walking across a carpet can create very large voltages. Even walking on a vinyl floor can create 5 kV of potential. Working at your workbench during a DCC install could easily generate 500V or more. You will only feel a discharge of 5000V or greater, so many of these static charges and discharges would not be noticed. When the discharge occurs a large current can flow (amps!) which is why you notice it.

How Does Static Transfer Happen?

There are several ways static charges can be transferred to semiconductor devices resulting in ESD damage. Often when it is touched by an item that is charged. A classic example occurs when a decoder is on a work bench and someone walks across the floor, creating a charge, then picks it up. The static charge discharges very quickly to the decoder, with the possibility of damage. Metal screwdrivers are more conductive and will discharge even faster with higher levels of peak current. It is not necessary to touch components to cause damage to them. Plastic cups can carry a charge, and placing one near a device can "induce" a charge into it, and can damage semiconductor devices. Even air or liquids flowing can create a static charge.

Pouring liquids from one container to another can create a static charge, caused by the movement of the liquid. This is extremely dangerous; a discharge can ignite flammable vapours.

The greatest danger to electronic devices is a discharge from the human body or charged material. The sudden release of charge into the device can produce high voltages or currents that can result in irreversible transformation and destruction. You may not feel the discharge, but the damage is real.

Damage can occur as a result of ESD when the high level of voltage causes breakdown to occur in a component. Smaller components and the downscaling of electronics into integrated circuits (ICs) increases the probability of ESD damage. A discharge can damage internal gates or transistors, and each time the device experiences a discharge, the time to failure decreases. Most manufacturers consider all semiconductors static sensitive devices, and often treat passive components like capacitors and resistors as being static sensitive as well. Surface mount devices (SMD), where their dimensions are smaller than traditional components, are far more susceptible to damage from ESD.

There are modellers who will confidently claim that they have never had a problem with ESD. Do not believe them, they have been participating in latent damage or having temporary malfunctions for years, the hard failures haven't happened yet. They have not recognized their malfunctions as being caused by static electricity.

What is ESD? Learn More About the Basics of Electrostatic Charge

ESD is short for electrostatic discharge. Large differences in potential (different voltages) cause a short electrical current – either in the form of a spark or disruptive discharge. However, many electrostatic discharges occur below the threshold of human perception, but can still cause damage – to electronic assemblies for example. For a human to perceive static discharge, it needs to have reached around 3,000 volts. In comparison, 30 volts is enough to destroy a semiconductor assembly.

There are a number ways in which you can protect against ESD at a reasonable cost. Not only can ESD cause instant failures, it can introduce latent failures, where the decoder will work on the test track, but fail later in service.

There are products available such as anti-static mats, wrist straps, flooring, anti-static bags and other items. By putting everything and everyone at the same potential, static can be controlled.

Even with ESD protection an ESD strike is a permanent danger to electronic device reliability as it can easily find a route to bypass any protection and be directly injected into the device. 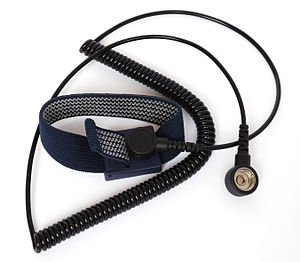 To avoid static in the area where DCC components and decoders are handled, the bench surface should be able to dissipate any static buildup which occurs. An anti-static mat on the bench is all you need. A conductive bench is as bad as an insulated bench, as they introduce the risk of shorting out any boards placed on them. The mat will help keep everything at the same potential.

Anti-static wrist straps ensure that any charge built up on a person is safely dissipated. This is connected to ground via the lead which incorporates a large value resistor, normally in excess of 1 MOhm. It is possible to connect your wrist strap, the antistatic mat, and any other points together in a junction box, or connect the wrist strap to the bench surface or mat which is properly connected to earth ground.

To overcome problems caused by flooring surfaces there are a wide variety of conductive or static dissipative coverings or coatings such as wax.

Synthetic fabrics used in clothing and chair coverings can develop very high levels of static during normal motion, even with the use of a wrist strap.

A cold dry winter increases the production of static charges. Dry climates and air conditioning create the ideal environment for static. Maintaining the humidity of your workspace helps reduce static electricity. Increasing the humidity creates a layer of moisture on items in the environment, which aids in dissipating any static build up, as moisture is a good conductor. A relative humidity of 40% or better is very effective. Dry air flowing across a surface can also induce a static charge, which is also reduced by increasing the humidity. 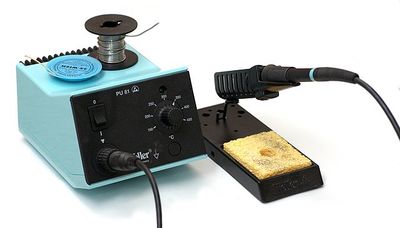 Note the ESD Safe symbol on the face of the station.

A wide variety of ESD Safe soldering irons are available. The main requirement is the tip of the soldering iron should be grounded. Recommended resistance tip to ground should be less than five ohms. Thermostatically controlled soldering stations should use a zero-voltage switching system. This prevents large spikes caused by the switching of the thermostat from appearing on the tip of the iron. Verification of Soldering and Desoldering Equipment

The above link has instructions on how to check if a soldering iron is ESD safe, and verify if your ESD safe iron still is acceptable. The process is simple and requires an ohmmeter and a resistor. There is a more sophisticated process, which can be done if you have the equipment. 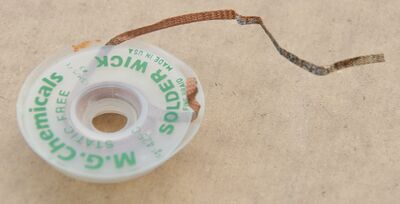 If your iron lacks a ground pin on its line cord, it is probably not ESD Safe.

Various tools for soldering are available which are ESD safe. Solder suckers are available, as is static safe solder wick. These tools are designed to minimize the creation of static charges through their construction and materials. 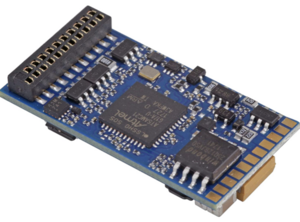 Whenever an electronic components or assemblies are transported or stored, they should be placed in suitable packing. Static bags are available to keep them protected. These can be purchased, or recycled from computer card or hard drive packaging. Conductive foam is also available. A simple check with the ohmmeter will reveal if it is conductive or not. Normally the resistance will be relatively low, a few hundred ohms at most, but this will obviously depend on the area of the test probes in contact with the foam.

When buying a multifunction decoder or other DCC accessory, keep it in its package and avoid handling it until you are ready to install it.

Static grass applicators generate a significant voltage, which is used to induce a charge in the material being applied. This charge can cause damage to DCC boosters and decoders. Take appropriate precautions when using devices which generate a static charge. Disconnecting the DCC power bus is a good start. Share this page

The DCC Wiki features a lot of information related to soldering: