Managing the impedance of your track bus is important. While this is an advanced topic, it is important to understand the basic principles to avoid creating problems when wiring.

A conductor in free space will have inductance when current flows through it.

A length of wire has impedance caused by the resistive and reactive properties of the wire. A larger gauge wire will have less impedance, as its resistance will be lower, and self-induction (reactive) properties are also reduced. The mathematics required to demonstrate this is complex and beyond the scope of The DCCWiki.

It is important to understand that the reactive components of your wiring's impedance have an effect on phase relationships. Since a DCC signal is a pulse made from a fundamental frequency and its multiples (harmonics), as those relationships are altered by the reactive properties of the wiring distortion of the DCC signal results. This results in some frequencies travelling faster than others, distorting the pulse shape. Excessive inductance increases any ringing which may be present. By reducing the inductance, ringing is reduced.

Two properties of wire which impact inductance are gauge and length. Longer wires have increased inductance. Increasing the gauge (reducing the diameter) increases the inductance. To counteract the inductance of a long power bus, a heavy gauge wire should be used.

The impedance of the wire is dominated by the inductance. When the inductance is lowered, so is the impedance. A 1m length of 10AWG has an inductance of 1.32µH, which at 8kHz results in a inductive reactance component of 66mΩ. The same length of wire has a resistive component of 3.3mΩ. The impedance (Z) computes to 66mΩ. This is why heavier wire is used than that of analog applications. A 14AWG wire has an impedance of 71mΩ per metre. If the wiring loop is 5m long (10m total) 10AWG is 660mΩ compared to the 710mΩ of 14AWG.

An effective method to decrease the inductance/impedance is keeping the wires close. The closer the better. The most effective solution is to twist the wires, with about three to five twists per metre. Doing so alters the phase relationships between the two wires, reducing any induced currents in the wire. Tying the bus wires together is also a very effective approach. Not only does it reduce the inductance, the increased capacitance reduces ringing in the bus. This is sometimes referred to as Closing the Loop. [2]

Attaching feeder wires to twisted bus wires gets complicated if you are not consistent with your colour coding, however, if the wires are not twisted a great deal, it shouldn't be too difficult. Tying the two wires together with cable ties is just as effective, plus it is easier to connect feeders.

Inductors store current in a magnetic field, when current flow increases, it resists that change. Lenz's Law states that a voltage, which will be opposite in polarity, opposes any increases in flux and current. This voltage is called Counter–Electromotive Force, or C–EMF, which is similar to Back EMF. 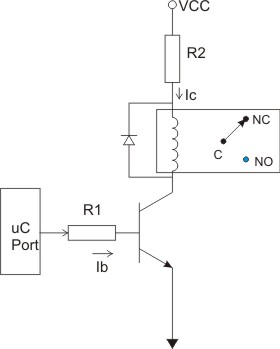 A relay circuit. The diode across the coil provides a path for the current to discharge when the power is disconnected.

When the current decreases, such as when the booster output switches phase, the magnetic field collapses inducing an Electromotive Force into the inductor. When this happens the polarity of the self-induced voltage is reversed as the inductor attempts to maintain current flow using the polarity of the induced voltage such that it adds to the source voltage, raising the total voltage in an attempt to maintain current flow in the circuit.

Relays and solenoids do the same thing, which is why they have circuits added to prevent/reduce the damage the kick back can cause. As shown in the picture, a diode provides a path for the discharge current to flow when the voltage source is disconnected. Otherwise, the current would flow into the transistor and the microcontroller as it seeks a path. At the same time a large voltage spike would be imposed across the transistor. The diode clamps that voltage to about 1V, protecting the transistor and microcontroller.

Mutual Inductance is the property where flux around one conductor induces a current in another. This is the principle by which transformers work. Mutual inductance can be additive or subtractive in nature. By keeping the power bus wires close together, their mutual inductance reduces the total inductance. As k, the coefficient of coupling increases, the resulting inductance decreases, as per the formula:

For example, if each bus wire were to possess an inductance of 50µHenries:

In DCC, the impedance of the wire is important. The Reactive Component can be much larger than the resistive properties of the wire, controlling the Reactive Inductive component is important for good electrical performance of your wiring.

Where X is the reactive component, calculated as (XL – XC)