Summary: A microcontroller or MCU is an IC which is custom designed for a specific application, such as a television or microwave oven. Due to their low cost, they are found everywhere. Your house probably has 3 dozen or more of them.

A common application of the MCU is as a Digital Signal Processor (DSP).

The best description is "a computer on a chip."

One of the first applications of a microcontroller was with the Hornby Zero 1 command control system developed during the 1970s. 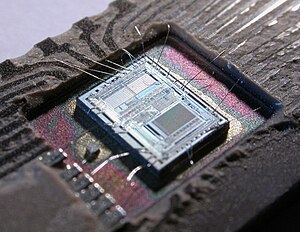 Since a microcontroller is essentially a "computer on a chip", it has the following components integrated onto one IC.

They can be simple 4-bit devices or more capable 8-bit versions. More sophisticated decoders may use 16- or 32-bit MCUs, as these allow for better sound fidelity.

They provide everything needed in a small package at a low cost, making it suitable for DCC applications, such as command stations and decoders.

What is the Difference between an MCU and CPU