Summary: The LB101 is an occupancy detector for signaling purposes.

The LB100 is no longer in production.

The LB101 contains two independent occupancy detectors, each of which can be used to detect that a train or piece of rolling stock occupies a section of track. It operates on the “current sensing principle”. The LB100 only detect occupancy when there is a "current consumer" within the monitored track section (detection section). The LB101 has been designed to detect a decoder equipped locomotive or a single car with lighting or resistor wheelsets. 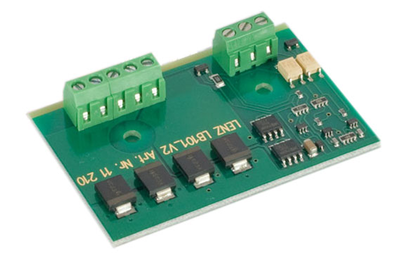 When the LB101 detects that there is something it its detection section, the LB100 closes a switch. This switch can be used to trigger other devices such as signals or layout feedback devices such as the DIGITAL plus LR100 encoder. The LB101 is compatible with all NMRA DCC systems.

Connecting the LB101 to a Feedback Unit

The feedback unit has been upgraded to the LR101