Lenz is no longer active in the North American market.
Should you need service, the only authorized Lenz service centre for North America was TLA Custom Models. Accessory Pathways has assumed the role. They have the necessary software to upgrade Lenz equipment to V3.6.

Lenz and the Development of the NMRA's Digital Command Control

When the NMRA set up its Command Control Working Group, an early decision was to forego the analog technology available and focus exclusively on digital technology. The WG requested samples of command control systems using digital techniques from a number of manufacturers for the purpose of evaluating the technology. A few manufacturers did participate, notably Marklin, with its Digital= System. After evaluating the submissions, the WG determined that the signaling technique used by Digital= was suited to the application. The WG then built their DCC protocol around the concept of using a combined power + data signal.

After settling on a data transmission method and basic protocol, the NMRA contacted Lenz, the contractor who developed Marklin's command control system. The NMRA cannot, and will not, incorporate any patented technologies or commercial products into an NMRA standard. Lenz reviewed the draft standard and indicated that the proposed DCC protocol did not infringe on any patents held by Lenz.

In fact, the proposed DCC protocol was significantly different than that of the Lenz system, and added numerous features and provisions for future enhancements.

Lenz is an electronics company, whose involvement in command control began in the 1980s as a contractor to Marklin.

In the early 2000s, Lenz decided to rename their products from Set 01 and Set 02 to Set 90 and Set 100 respectively. The throttles are almost identical to the older ones in Set 01 and Set 02. The electronics and software are much improved in the Set 90 and Set 100. The product names are derived from the throttle included in the set, an LH90 or LH100. The separate command station and booster combination have been replaced by an integrated command station/booster. The new unit also included RailCom and improved response times on large layouts with multiple locomotives in operation.

The current starter set is as follows:

The Set100 is no longer in production. 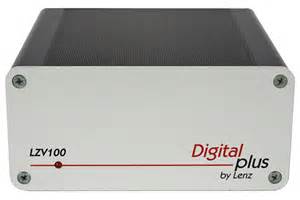 Q: Why is my Lenz LH100 display flashing? 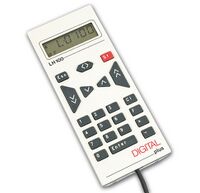 A steady or flashing display of LH100 usually indicates a broken wire in the cable. Another cause can be the EPROM in the throttle isn't seated or has corrosion on its pins.

In either case, the recommended action is to return the unit to a service center for repair.

Generally speaking, yes. If the combination will not work, but did previously, check the C, D and E connections. Miswiring is often the culprit.

The various operating states of the LZV200 are indicated by the upper LEDs on the front panel, the state of the built-in amplifier (booster) by the lower LED.

During normal operation, both the upper and lower (red) LEDs are on.