Summary: Momentum attempts to replicate the mass of a real train, for more realistic operation.

Short Definition
Decoder feature which attempts to replicate the mass of a real train, that is, real trains just don't stop and start suddenly.

Locomotive Momentum is a decoder feature which attempts to replicate the mass of a real train, for more realistic operation compared to toy trains. Real trains do not start and stop suddenly. Acceleration and deceleration will occur over a period of time, independent of how fast the throttle is opened or closed. Just like a car does not skid to a halt when the throttle is closed.

When a real train starts or stops, it does so slowly because of the of mass involved. When starting a train, the engineer gradually increases the force as the slack is taken up, for a smooth start. As more cars begin to move the train will gradually increase in speed. When more mass is involved, more energy is required to get the train moving. Once the entire train is moving, more power can be applied to accelerate the train.

The rate of acceleration is dependent on the amount of force being applied by the locomotive. To stop a large heavy train, the forces that keep it moving must be counteracted. Brakes are used to dissipate the energy contained in a moving train by conversion to heat. This will be done through dynamic and friction brakes.

With our models there is very little inertial mass as the mass of locomotives and rolling stock is low (the physics don't scale). This allows our models to get up to speed almost instantly. Which is very toy like instead of a realistic model.

The throttle controls the arrangement of a number of contactors (relays) which supply the traction motors with energy at different voltages and currents. As the throttle is advanced through the notches these arrangements change. The governor controls valves supplying fuel to the injectors, allowing the primer mover's power output to be adjusted as needed, using feedback from the load regulator. The throttle also provides a mechanical interlock between it, the reverser and dynamic brake control levers.

The locomotive's control system will change the wiring of the traction motors automatically. From a stop, the motor's field and armature windings are connected in series for maximum torque. The torque is proportional to the square of the current. As the locomotive accelerates contactors will automatically begin switching resistors in series with the motors to reduce the current. At some point the locomotive will transition (manually in an older locomotive) to a parallel connection of the motors to apply full voltage to them. Electric locomotives (also known as Motors) use the same arrangement to manage power consumption and torque requirements. AC Motors, such as the GG1, used tap changers on their transformers for the same result.

Modern sound decoders calculate the differences between selected speed step and actual motor/wheel rotation speed to generate the appropriate sounds. Without any momentum settings in CVs 3 & 4 the sound generation software will never create the engine sounds associated with acceleration and deceleration. The engine will continue to idle. Setting the momentum CVs allows realistic audio generation representing the prime mover's operation/loading.

Operation of the Prototype

From the EMD SD50 Operators Manual

Locomotive control involves the interrelated functions of the throttle, governor and load regulator. The engine RPMs are determined by the throttle position, and the governor maintains that RPM by controlling the amount of fuel delivered.

Actual operations cause varying load conditions. As the load changes, the load regulator varies the generator's excitation. The load regulator balances the governor's speed setting from the throttle with that of the engine's power output determined by the load.

As the throttle is advanced the electrical control system allows more current to flow through the generator's field winding. The increase in excitation current results in more power to the traction motors. Locomotive power, and engine speed progressively increase as the throttle increases

Should I Use This Feature?

There are three primary ways most people think about this 'feature'. 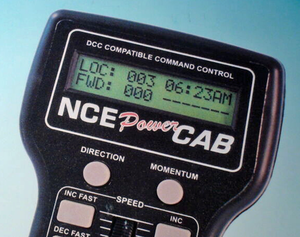 The Momentum button alters CVs 3 and 4 when pressed.

With OPS Mode Programming, you are able to change momentum on the fly. This allows you to simulating adding/removing cars/load/weight from your train. To disable momentum control, simply set CV03 & CV04 to 0.

Altering a modern decoder using a brute force method such as that offered by the momentum button on an NCE throttle can cause havoc with decoder programming by making permanent changes to CVs, resulting in the settings interfering with any fine tuning you have done.