Summary: European models are supplied with a Radio Frequency Interference (RFI) suppression circuit, comprised of a LC (Inductor-Capacitor) circuit across the motor brushes. High frequency signals (electrical noise) emitted by the motors can interfere with household television and radio reception. Other countries may also require the same RFI supression. This is not a requirement in North America. 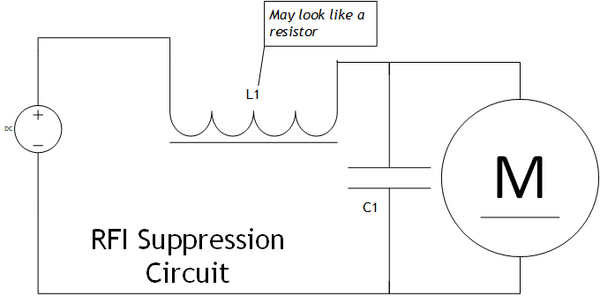 Which is great, except the PWM used for motor control is also impacted. Square waves contain a lot of harmonics, and they see the LC circuit as an additional load. This circuit can also interfere with the BEMF the decoder may want to measure.

The RFI circuit can be easily identified. They can consist of

Capacitors are small disk like components with two leads, resistors and inductors look similar, resistors using a series of colour bands to identify their value where inductors use numbers. Some inductors may also use colour bands.[1]

Properties of Inductors and Capacitors

The properties of these components can alter the shape and amplitude of PWM signal presented to the motor, as well as distort/attenuate the BEMF voltages produced by the motor. Since their behavior is determined by frequency, it will have different results as the motor speed is increased.

Why Does the Motor Require this Circuit?

As model trains are classified as toys, specifically designed for the use of children of the age of 8 years or under, EU regulations require RF suppression across the motor brushes. This is done to reduce any interference the motor may create. Technically, these manufactures, being toys, would not include a Digital Command Control decoder. The regulations do not differentiate between a toy (for children) and a model meant for adults.

Some manufacturers install them by default to avoid compliance issues with product which may be shipped to the EU. Manufacturers which sell product globally often do this.

When fitting a decoder, check for the presence of the suppression circuit across the motor's brushes. If it is present, remove (if possible) or disable it. Simply snipping one of the capacitor leads removes it from the equation. If other components (such as a resistor or inductor) are in series with the motor leads, they should be removed or shunted using a wire connected across the component.

At a minimum remove the capacitor across the motor brushes. The inductors are in series with the motor, and will have minimal effect on the PWM signal from the decoder. The inductor is in the 5 microHenry range, and at 10 kHz will have an impedance of 300milliOhms. At PWM frequencies this increases to about 1.25 ohms. The inductor will create problems with BEMF, as it will impede changes in current. Therefore, they should be shunted or removed.

The capacitor is the issue, as its impedance decreases as frequency increases. This allows current to be shunted across the motor, without doing any work.

Removal will reduce current drawn from the decoder, and improve performance, especially with BEMF and speed curves. This is applicable to high frequency PWM, normal PWM decoders will not be affected by RFI suppression circuits. Removal will cause RFI without a decoder installed. The decoder's output will provide the RFI suppression.

Some decoder manufacturers may not recommend removal of the RFI circuit, read their instructions for guidance. They were designed with this issue in mind.

Zimo instructs the installer to remove the capacitors and inductors. The inductors can be bypassed by shunting them with a wire if required.

How to Read an Inductor