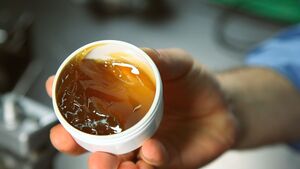 Flux comes from the Latin fluxes, meaning flow. Flux is used as a chemical cleaning and flowing agent when joining metals. This assists solder in adhering properly to the materials being soldered. Flux helps to remove previous oxidization, while preventing further oxidation during the soldering process. 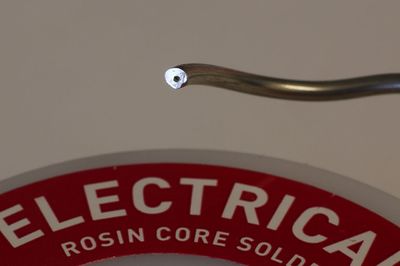 Some fluxes are corrosive, so the parts have to be cleaned with a damp sponge or other absorbent material after soldering to prevent damage later.

Several types of non-corrosive flux are used in soldering electronics. Flux should be cleaned off after soldering a joint.

Some decoder manufacturers include a warning instructing the decoder installer not to apply any flux during soldering.

The reason: Many modellers refuse to take advice and apply an acid flux. Such as plumbing flux from the tins found in the plumbing section of hardware stores. Another culprit often praised online is the TIX brand flux. It contains zinc chloride, which is inappropriate for electrical work. TIX is marketed to gold and silversmiths for soldering jewelry.

Be aware that many solder preparations are available which also contain acids. Solder pastes, as an example. These solders, as well as acidic fluxes, are not recommended for use with electrical or electronic applications. The flux can never be completely removed nor neutralized by cleaning. This is especially true for stranded wire. The flux will wick into the bundle of wires and travel away from the joint. There is no way to clean or neutralize the flux in this instance.

If in doubt ask for and read the Material Data Sheet. If the ingredients include zinc chloride, ammonium chloride, hydrochloric acid, phosphoric acid, citric acid, or hydrobromic acid, the flux is acidic and is not recommended for electrical work. These aggressive fluxes are meant for use with plumbing, steel, and other materials normally not used in electronics, and at higher soldering temperatures.

Can I Use Acid Flux?

Do Not Use Acid Flux, That is for Plumbing!
A major decoder manufacturer stated that the most common reason for decoder failures is Acid Flux. Some manufacturers include a warning regarding flux, and may not honour a warranty return if any flux was used during installation.

Acid fluxes used in plumbing and automotive applications are very aggressive, often containing hydrochloric or other acids. Those properties make it very effective, and thus popular will modellers. Acid based fluxes dissolve small wires over time, and their residues are conductive. Therefore, acid fluxes are not recommended for electrical and electronic work. If the flux contains Ammonium Chloride or Zinc Chloride they are acidic and not appropriate for electrical work.

A repeat offender is the TIX brand flux which is enthusiastically promoted by model railroaders on web forums and email lists. Do not use TIX for electrical work!

The correct flux for electrical work is Rosin Flux. 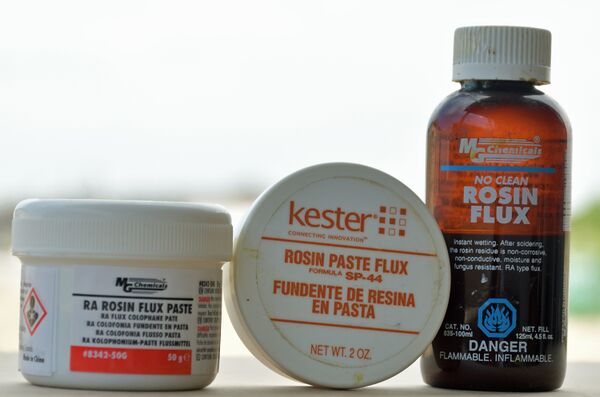 Many solders sold for electrical purposes are rosin-core. The solder wire has a hollow core filled with rosin flux which is activated by the heat of the iron. For better results, apply additional flux. Rosin flux can be purchased in liquid and paste form, there are also various devices to aid in application, available from a store that deals in electronic components. Solid wire solders (often used for plumbing) require the use of flux.

Note
The flux within a rosin core solder will in react with the lead content, becoming less effective, hence the need for applying additional flux. Rosin Core Solder with less than 70% lead content has a shelf life of three years, from the Date of Manufacture, so it will not hurt to add additional flux.

Flux also has a shelf life, check with the manufacturer for details. Typically it is three years.

The application of a small amount of flux to the work prior to soldering will improve the results substantially, as well as speeding the process, which is important if you are soldering track with plastic ties. When heated the flux is activated and facilitates the wetting process, allowing the solder to quickly wick into the joint. There are those who will say that adding additional flux is unnecessary, as the solder already has a flux core, yet as noted above rosin core solders have a shelf life of only several years. For the average modeller, the solder on hand is likely to be several years past its best before date. Adding additional flux will not hurt, and possibly improve results.

Brushes for applying flux are available in many hardware stores, often in packages of a dozen or more. Another application for flux brushes is sweeping ballast during application and bonding. Stores catering to the electronics trade will also have various tools to apply flux, in addition to a variety of solder and flux.

What Exactly is Rosin Flux?

The terms resin and rosin are ambiguous and somewhat interchangeable, with different vendors using different assignments. Generally, fluxes are labeled as rosin if the vehicle they are based on is primarily natural rosin. Some manufactures reserve the "rosin" designation for military grade fluxes based on rosin (R, RMA and RA compositions) and label others as "resin".

Rosin has good flux properties. A mixture of organic acids (resin acids, predominantly abietic acid, with pimaric acid, isopimaric acid, neoabietic acid, dihydroabietic acid, and dehydroabietic acid), rosin is a glassy solid, virtually nonreactive and noncorrosive at normal temperature, but liquid, ionic and mildly reactive to metal oxides in a molten state. Rosin softens between 60-70°C and becomes fully fluid at around 120°C; molten rosin is weakly acidic and is able to dissolve thin layers of surface oxides from copper without further additives. For heavier surface contamination or improved process speed, additional activators can be added.

There are three types of rosin: gum rosin (from pine tree oleoresin), wood rosin (obtained by extraction from tree stumps), and tall oil rosin (obtained from tall oil, a byproduct of kraft paper process). Gum rosin has a milder odour with a lower tendency to crystallize from solutions than wood rosin, and is therefore preferred for flux applications. Tall oil rosin finds increased use due to its higher thermal stability and therefore lower tendency to form insoluble thermal decomposition residues. The composition and quality of rosin differs by the tree type, and also by location and even by year. In Europe, rosin for flux is usually obtained from a specific type of Portuguese pine, in North America a North Carolina variant is used.

After soldering use flux remover and a small brush to clean the area. Flux remover is available in various packages, including aerosols. This is important with track, as the wheels will pick up the sticky residues and spread them everywhere, resulting in intermittent operation, especially at joints that were soldered. The residues will attract and hold dust, moisture, and other contaminants.

Always remove the flux after soldering on a PCB. The residue can become conductive over time by attracting dust and other airborne particles. In small dense circuit layouts, this can lead to failures due to components being shorted by the flux residues.

A number of commercial preparations are available for removing flux. Isopropyl alcohol (IPA) and water will also work. Mixtures of IPA and acetone can also be effective. Read the instructions for the recommended solvent to remove the residues. A quick search on the internet will yield many possibilities and processes.

A number of new flux preparations are now available which proclaim No Clean on the label.

Despite what they state on the label, cleaning is still needed, otherwise the residues left when soldering on the track will travel and contaminate the trackwork.

While they are called No Clean flux, this only applies during production of electronic devices. The manufacturer does not have to clean flux residue off finished the PCBs, as it will not become an issue later. For applications such as soldering feeders to trackwork, cleaning is needed, and can be accomplished easily, often with water as a solvent.

What is Flux?
Retrieved from "https://dccwiki.com/w/index.php?title=Soldering/Flux&oldid=21519"
Categories:
Last Edited: 14 January 2021.