Summary: Configure a Tsunami decoder for easier use with a WiThrottle 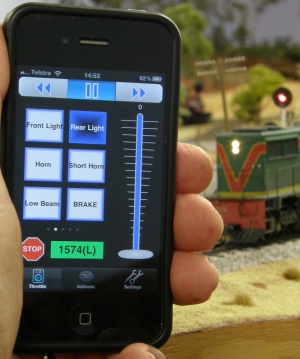 WiThrottle in use with the Tsunami brake feature mapped to F5 function button.

This page concerns configuring a Soundtraxx Tsunami sound decoder for easier use with WiThrottle software.

For more information on the WiThrottle click the link or see the additional links at the bottom of this page.

Setting Up Your Tsunami to work with a WiThrottle

By default, the Tsunami brake feature is mapped to function F11.

Some users remap the brake feature to F7 as it is then accessible on most DCC throttles without having to use a shift key or other means of accessing the higher-numbered functions. (This procedure and function mapping in detail is explained in detail in the Tsunami manuals.)

With standard Tsunami configuration, the brake feature can only be mapped within the range F7-F12. However, it is possible to remap the brake feature to lower number functions, such as F5, by using the Tsunami "function swapping" feature.

Enabling function swapping is simply a matter of setting CV30 to 4. (The default is zero.)

The CV's associated with function mapping are then switched around as well. The following table summarises the CV's which are altered:

Setting CV43 to 128 will map the brake feature to F5. If not used for another function, F7 should be unmapped as the default brake function by setting CV45 to zero. Note that the default of F11 for the brake became F7 due to the function swapping.

The common assignment for sound decoders of F8 for mute can be retained, by setting CV46 to 16. Again, the default mapping for the mute should be removed by setting CV42 to zero, otherwise the mute function would also be assigned to F12 (after function swapping).

Other functions can be similarly altered if desired, depending on what function are used in the particular loco. The important outcome is that the frequently-used functions for lights, horn/whistle and brake now all fall into the F0-F5 range and appear in the first group of function buttons in WiThrottle.

If using CV21 and CV22, which determine which functions for a particular loco can be controlled from the 2-digit consist address, the bits in CV21 and CV22 refer to the original "unswapped" functions. Refer to Consisting_with_Tsunami_decoders_and_Lenz#CV21_and_CV22_Configuration for more information.

A bonus for WiThrottle users with Diesel Tsunamis is that the STOP button on WiThrottle activates the engine shutdown sequence when the loco is stationary.