This DCC conversion will allow you to move the crane along the track, as the prototype would. The boom and rigging are not motorized, they can be operated using cranks included with the crane.

This type of MOW equipment would be used in a yard or industrial setting to move scrap, track, or help unload various items from freight cars. For bigger jobs, the railroad would use the Big Hook, such as rerailing a locomotive.

What Will You Need?

Rotate the cab 90 degrees, making it easier to release the cab. Carefully remove the cab. By prising carefully at the back of the cab it can be released, and then gently remove it.

Be careful not to tangle the rigging, and be aware that the boom will fall as the rigging is attached to the cab.

Position the crane so you can access the motor connection tabs at the back of the chassis.

Wiring is rather simple as the crane has no lighting. An N Scale decoder was chosen as it is small enough to easily fit into the cab.

The tabs are small and hard to get at, so the decision is to solder directly to them, or use the wires as pigtails and connect to them.

Plan the wiring before any cutting, to make positioning the decoder easy while keeping the excess wire from being a problem later.

After wiring in the decoder, in this example Kapton tape was used to secure the wires. The decoder was positioned on the right side of the mechanism. Prior to reassembly, it may be a good idea to lubricate the gear train.

After positioning the decoder simply slide the cab over the mechanism and gently seat it. Pay close attention to the rigging, so as to not tangle it. 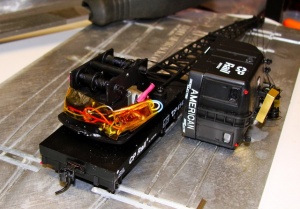 Decoder wrapped with Kapton tape prior to positioning and reinstallation of the cab. Tape is also used to hold the wires in place.

After reassembly, you can test the crane.

If it doesn't work, it is possible the connection to the motor came off during reassembly. Disassemble and check the wiring and connections.

When running the crane is rather noisy. Since the motor is rather small, do not attempt to couple the crane to another car. The motor may not be strong enough to move both the crane and another car.

The only real programming that is needed is to change the address from 03 to whatever you want. There are no lights to be setup. Although it is possible to add them. 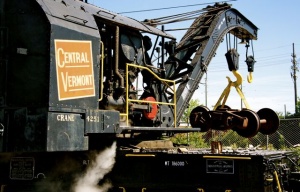 The Big Hook, one of two operational steam cranes in North America. Unlike the crane in this article, a locomotive is needed to move it.
Retrieved from "https://dccwiki.com/w/index.php?title=Walthers_American_Crane&oldid=19955"
Categories:
Last Edited: 30 August 2020.