Summary: The locomotive is controlled by the magnitude of the voltage applied to the track. Also referred to as Direct Current or DC.

A dictionary would define analog with respect to a continuous electrical signal where the voltage, current, polarity, phase or frequency of the signal may be varied to represent the information.

Examples include the phonograph, where a needle follows a groove in the record whose motion represented music or speech. This mechanical action was converted to an electrical signal which was amplified and broadcast via a speaker whose motion mimicked that of the record's grooves. Early recordings were made and reproduced mechanically, until electrical methods became available. Later, tape recorders were used to reproduce sound with the tape containing magnetic patterns whose strength and frequency represented speech or music. Another example is an electric clock, whose hands on the clock face are in continuous motion driven by a motor synchronized to the line frequency.

In model railroading, changing the amount of voltage available on the track controlled the speed of the locomotive. More voltage, it goes faster. Speed is reduced by lowering the voltage. Change the polarity relationship and the locomotive responded by changing its direction. Analog control is referred to as Direct Current or DC, as most model railroads used DC. Some analog throttles used PWM (Pulse Width Modulation) to control the average voltage on the track. While PWM offered improvements in slow speed operation, it was still analog.

Unlike Digital Command Control, which always has the same voltage applied to the track, analog uses control of the voltage to regulate speed and direction. You control the track, not the train.

Originally, the trains ran on Alternating Current, or AC, the same form of power supplied by the utility to your house. A simple transformer and rheostat provided control. Some early examples applied the full line voltage to the track but later, for safety purposes, it was reduced to the voltages we use today. Lionel is an example of an AC traction system, using three rails for simplicity.

Originally all model railroads were three rail, but some intrepid pioneers began converting their layouts to use an outside third rail for a more prototypical look, and began using Direct Current from a Battery to power the model locomotives.

At early as 1934 there were discussions about converting to Direct Current. The technology of the time meant Flat DC using car batteries (automotive electrical systems were 6 volts until the mid-50s.) The reason for using a battery was the cost of electronics. While batteries were expensive themselves, a vacuum tube power supply was large and costly, and solid-state selenium rectifiers were costly as well. The practical (and less costly) method was a battery and a battery charger.

Another possibility was the rotary converter, but they were very expensive. They were employed by prototype railroads to convert 60Hz AC to 25Hz used by electric locomotives. (That was another issue, there was no large-scale electrical grid in North America until the 1950s, and the line frequency depended on whose equipment your utility purchased.)

Direct Current gained traction with the introduction of HO scale as the motors were smaller. Solid state electronics made possible smaller and more reliable power packs supplying direct current. Another factor favouring direct current by the 1950s was the standardization of the power system in North America to 60Hz, simplifying the design of power supplies. (Transformers work best and most efficiently at the frequency they were designed for.)

Direct Current for operation of a model railroad remained unchallenged until the advent of Digital Command Control. Previous attempts at command control inevitably failed due to high cost and complete lack of compatibility. Many modellers were unwilling to place a large bet on a proprietary command control system such as ASTRAC or the later CTC-16, allowing DC to rule. Today DC is still has a formidable presence, but Digital Command Control is more the norm than the exception. 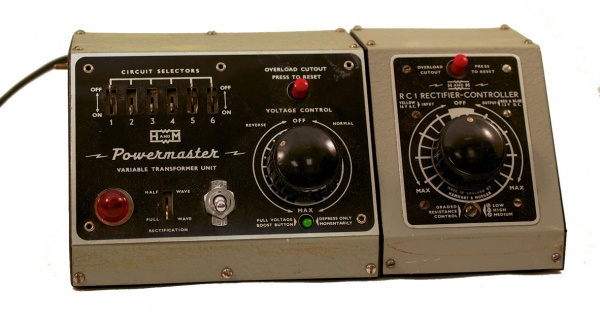 These are defined in the NMRA Electrical Standard S-9.

This STANDARD establishes ELECTRICAL requirements for interchange and safe and satisfactory performance of two rail equipment on model railroad layouts.

Two important points from the Standard are:

While the standard states 12VDC, this is the minimum acceptable voltage under load, and can be as high as 16VDC. Many magazine reviews use 12VDC to determine the top speed of a locomotive, making comparisons easier.

North American Utilities used all manner of line frequencies, and voltages, until they standardized on 120/240VAC 60Hz for domestic service. Prior to that, it could be any frequency from 16 to 400Hz. Westinghouse (of Air Brake fame) installed 25Hz alternators at Niagara Falls, because that worked best with the turbines, making 25Hz very common in that region. Direct current service in New York City was terminated a few years into the 21st century. The last 25Hz alternators at Niagara Falls (Sir Adam Beck GS) were removed from service in 2011.

This complicates the design of power supplies, as it either has to be localized, increasing production costs, or designed to operate on a number of voltages and frequencies, which adds complexity and cost.

Twenty-five Hertz is used with large commutator type motors in industrial service, which don't like frequencies like 60Hz. The Pennsylvania Railroad employed 25Hz AC on their electrified sections, which drove the GG1s down the track for many years. Today, the power is still 25Hz. Power was generated by line side stations, or purchased from the local utility. If needed, large rotary converters were used to generate 25Hz power if it was not available from the utility at that frequency. Today, that conversion can be done with solid state frequency converters.

The 6V automotive batteries of the time were not cheap either. They were expensive enough that most repair shops had the tools and experience to rebuild the battery in their shop. The battery of the day was designed to be repaired as well. Today, much like spark plugs, they just replace them.