Loudspeakers are electromechanical devices (transducers) which convert electrical signals into sound. Locomotives equipped with sound will employ one or more loudspeakers to reproduce the sound generated by the decoder. 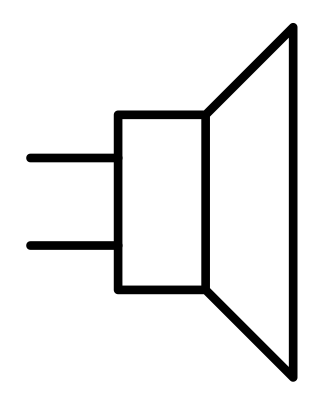 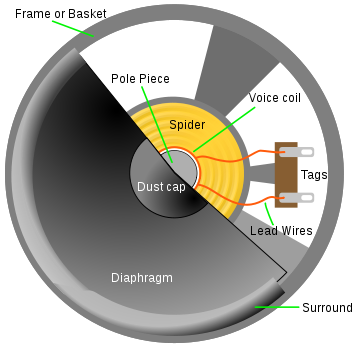 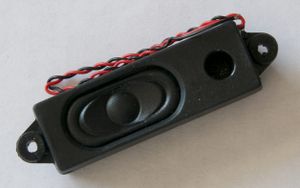 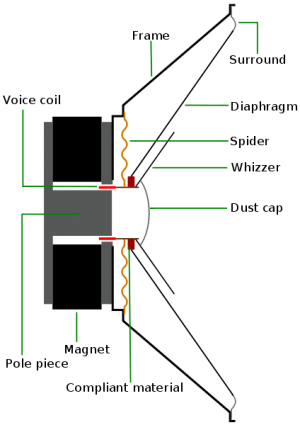 The speakers will be mounted either in the body, on the frame or in the fuel tank of a locomotive, or in the tender of a steam locomotive. For proper sound a baffle or enclosure is needed. These can be purchased from a hobby shop or constructed from plastic sheet or stiff cardboard. The baffle enhances both the sound and the volume.

A speaker is constructed by winding light gauge wire into a coil. The coil is then mounted on the speaker cone, and the entire assembly is surrounded by a magnet. When energy flows through the coil, the resulting magnetic field causes the coil to move. The movement creates sound.

The speaker is rated in terms of watts (W) and impedance (Z, indicated in Ohms (Ω)). Watts are the amount of power the coil can withstand, and the impedance is the load the speaker presents to the amplifier driving it. You cannot measure the impedance with a DMM as the coil is almost a short circuit.

Speakers are produced in a variety of sizes, impedances and power capabilities for numerous applications.

Impedance is a complex measurement that indicates the resistance, inductance, and capacitance of the voice coil. It cannot be measured with an ohmmeter, as it is an AC only quantity. Impedance is represented by the letter Z. The impedance is mainly from the inductive reactance component of the coil's properties.

Most general-purpose speakers have a nominal impedance[1] [2]of 8Ω (Ohms), such as those used in home audio. For applications such as automobiles, 4 ohms is typical (same volume, less power needed). The value usually is marked on the speaker. You may see the omega symbol Ω, or the letter R used to indicate impedance. (Especially in print, R is often used. If you see a value like 2R2, the letter (may be R, K, or M) is the multiplier and takes the place of the decimal. 2R2 is 2.2 ohms, and 2k2 is 2200 ohms.) The impedance is determined by the design, as a woofer will have a larger gauge wire to handle the power needed for low frequency reproduction, and the tweeters, which don't demand as much energy but must react faster, will be made with a finer wire.

To avoid damaging the amplifier, do not use a speaker of lower impedance than that specified. Higher impedances are acceptable, at the cost of a lower volume output.

Speakers wired in series: Total Impedance equals the sum of the individual impedances.

(Remember the Order of Operations)

It is important to match the speakers to the amplifier. For maximum power transfer, they should match. Using a single 16 ohm speaker on an amplifier designed to drive an 8 ohm load will usually result in maximum volume being reduced. The opposite is also true: 4 ohms means more volume with less power.

If installing two 8Ω speakers, wiring them in series reduces the risk of overloading the amplifier. At the same time, sound will be enhanced by the increased speaker cone area. If you can install 4 speakers in a series/parallel arrangement, the effective area of the cone will be increased for better low frequency response.

Incorrect phasing attenuates the lower frequencies. It is hard enough to reproduce the low end without phase mismatches.

When selecting a speaker, there may be a few parameters listed for that specific speaker. The important one is FS (or FO). This value is the resonant frequency in free air. The lower that frequency the better the bass response will be.

For example, a speaker with an FS of 100Hz will produce that frequency with minimal effort. Below that value the output will roll off quickly. It will work well at 150Hz, but not so well at 75Hz.

Another value is the Q factor. This measures the damping, or how closely the speaker will follow the signal, especially at FS. This number is often omitted, lower is the better.

Speakers for use with DCC should be of the impedance recommended by the decoder manufacturer. Too low an impedance can damage the amplifier, and the speaker. Too high, and the maximum sound levels will be reduced.

For multifunction decoders, speakers will be by necessity, small. This introduces new challenges. The speaker must be mounted securely to avoid resonation with the body shell, with no interference from internal components or wires. For the best reproduction the speaker should be as large as possible, installed with an enclosure, and direct the sound downwards toward the track. Enclosures can be made as needed, purchased, or may even come with the speaker. Many commercial offerings of DCC Sound Equipped locomotives use a number of speakers and enclosures to maximize sound quality and volume.

Items mentioned in the video:

DCC Speaker Principles: Getting the Sound Out (Model Railroad Hobbyist)

MRH DCC columnist Bruce Petrarca provides some amazing insights into how speakers work in a model railroading context, laying the ground work for his Digital Command Control column in the August issue on how to do sound decoder installation in a way that's easy and effective. Part of the content in the August issue of Model Railroad Hobbyist ezine.