The BT2 was a simplified throttle with limited capability designed to get people up and running quickly. The BT2 was discontinued in 1999.

Part of the Challenger Set. Discontinued in 1998, this product is no longer able to be repaired. CT4 throttles can ONLY be used with a Challenger Set. They were not replaced with another similar product when discontinued. 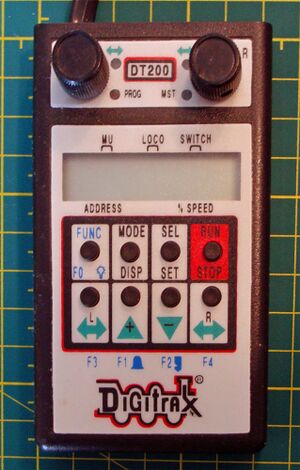 DT200 is a throttle and command station that was shipped with Big Boy Starter Sets. Discontinued: 1998.

A DT200 will function as a DT100 throttle when connected to a Digtrax DCC System (except the Big Boy).

A compact full featured walkaround handheld. DT300R comes ready to run simplex radio when paired with an optional UR91. Simply plug into select a loco then you're ready to go wireless. Discontinued in 2005.

The DT400 super throttle gives you direct control of two locos at a time. Run trains and consist, control up to 12 functions such as sound, program decoders, set up and operate routes, and much more.

Offers Simplex wireless radio control with a UR91 simplex receiver.

This throttle was the successor tp tje DT400, and was retired in 2016 when the DT500 replaced it. It featured 30 functions. Included with the Super Chief XTRA and Super Empire Builder Xtra sets.

Traditional walk around operation.Automatic locomotive selection and speed matching features, does not allow programming or turnout control.Infra-ready out of the box (with UR90, optional).

Duplex radio version, approved for use in the US, Canada, Australia and New Zealand.

These throttles do not support turnout control or programming of decoders.

These simple, cost effective throttles feature one large knob for speed control and a direction switch for direction control. Great add on throttle for all Digitrax Starter Sets. (Discontinued: 2005)

If a replacement potentiometer (pot) is required for a UT2, the device is a 50kΩ Linear pot. Online sources indicate the ALPS RK09L1140A5P is a suitable replacement.

These simple, cost effective throttles feature one large knob for speed control and a direction switch for direction control. Great add on throttle for all Digitrax Starter Sets. (Discontinued: 2005)