Fichtelbahn is a manufacturer of BiDiB enabled products. Available products include a Command Station, which also doubles as a DCC booster and supports up to 48 feedback blocks through the GBM16T module.

The main component of the system is the GBMBoost module which provides a DCC booster and can work on a Master or Slave configuration. The BiDiB network can only contain one master node which acts as a command station and interfaces with a PC control application.

Further GBMBoost nodes operate as slaves and provide Booster districts to the layout. 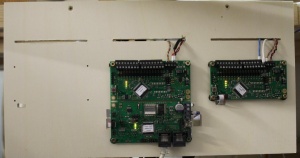 Each GBMBoost node (Master or Slaves) can manage up to 48 detection zones on the layout through the GBM16T module. Each GBMBoost already includes on GBM16T so two more of such modules can be connected to the node.