Summary: A decoder typically installed in vehicles such as locomotives, which controls motor and lighting functions. Multifunction Decoder is the preferred term for a mobile or locomotive decoder. It reflects the ability of the decoder to control multiple functions, such as speed, direction, inertia, in addition to lighting. 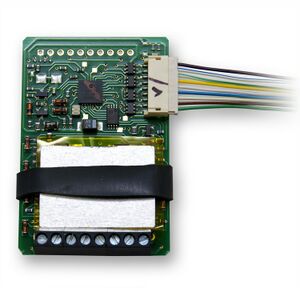 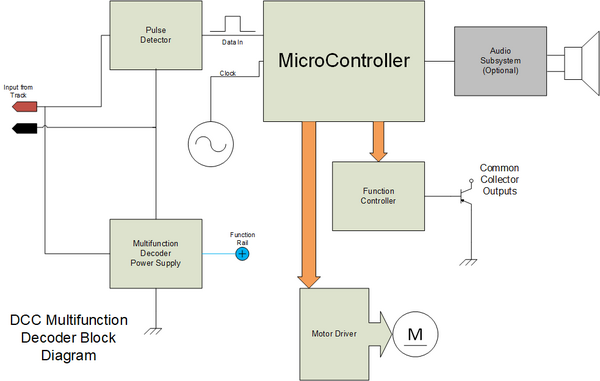 A decoder is actually a small computer system. It takes power from the track, in the form of a digital packet. This provides power to operate the decoder, as well as data. When a valid digital packet addressed to it is received the decoder processes then acts on the instructions. Speed and direction information are applied to the motor controller, which supplies voltage to the motor, causing the locomotive to move in the direction desired. The microcontroller can turn on lights, activate them based on direction, as well as allow operation as part of a consist. More advanced decoders have more features, including sound.

The second generation of decoders featured a higher frequency PWM signal, from 15 to 40kHz. This reduced the hum by increasing the drive frequency into a range people can't hear. While this improved the noise issue, and didn't impact slow speed operation, it came at the cost of reduced torque.

Multifunction decoders began to appear with modifications to the high frequency PWM scheme to improve torque. Usually called torque compensation, which was the addition of dithering to the motor drive signal. Dither involves adding low frequency components into the PWM signal so as to add the benefits of the low frequency drive scheme without incurring its drawbacks. Better torque, without the noise issues.

Back EMF or Back Electromotive Force is a problem with motors. Eddy currents in the rotor are created by the magnetic field as it turns. These limit the top speed of the motor, requiring more power to overcome them.

BEMF can also be put to use. Decoders appeared with the ability to measure the BEMF voltage, and use that to better control the speed. Algorithms in the decoder's firmware use that to maintain a constant motor speed. Additionally, multifunction decoders with sound also use that information to alter the sound based on the motor load. Not only will your train maintain speed travelling up a grade, the locomotive will make sounds indicating it is working hard doing so. Downgrade, it will adjust the sound accordingly, for more realism.

The fifth generation of multifunction decoders added the PID feature. Additional algorithms worked with the BEMF to make small, incremental changes to the motor drive signal. The PID feature tries to match the real values to a desired value by making small but continuous adjustments. 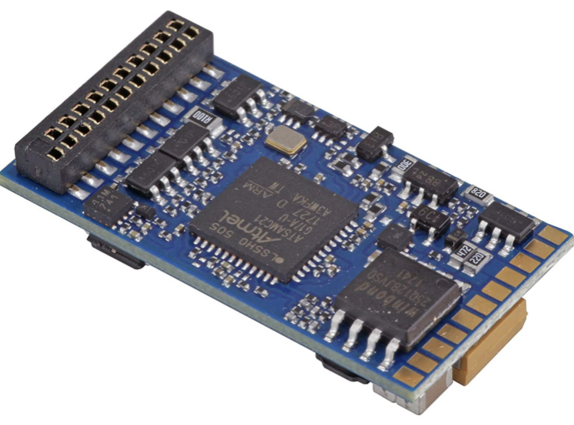 Multifunction decoder with 21MTC Connector interface. This side faces up after installation.

The decoder size will be dictated by the amount of available room inside the locomotive or tender body as well as the amount of current demanded by the motor. There should be enough room for cooling and wiring as well. Before selecting, it's best to determine the stall current of your particular locomotive. One decoder can drive multiple motors, provided the sum of the stall currents doesn't exceed the decoder's current rating.

Multifunction decoders have a number of features and functions that vary with the manufacturer, and even the specific decoder model. Don't be alarmed by the large list of features listed. Usually, the defaults that come with today's decoders work well. If the decoder you have has a feature you do not need or want, simply ignore it. We've broken the list down to a few basic areas:

Functions are solid state control circuits on decoders that control lights, sounds, smoke, animation, uncoupling devices, etc. Many are not limited to simple on/off functions - for example, some lighting functions are capable of imitating MARS lights, Gyralights, Rule 17 dimming, single or double flashing strobes, ditch lights, and other effects. Many decoder lighting outputs are 12 volts DC. Other decoders are specific to certain models, and still others have built-in voltage regulators or resistors for LEDs. Always check your decoder's documentation to verify output levels before you install lighting. 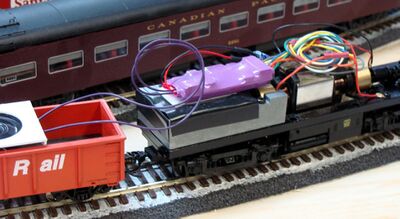 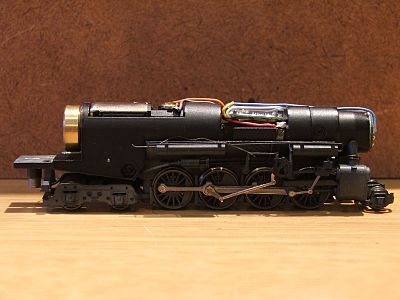 Be aware that some low-cost decoders are available on the market which use pirated software. They have been marketed and sold in hobby shops under various brand names. Often, they can be found on online auction sites. If the price of a decoder is notably less than the cost of a typical equivalent, be aware that it may be a counterfeit. Parts of questionable quality may be used as well, and support can and will disappear quickly when the fraud is discovered. The victims in this are small DCC companies designing and writing software for their decoders.