G Scale is a popular scale for model railways, particularly garden railways. The name comes from the German grosse. Originally and correctly, G scale is the use of 45mm gauge track, as used in standard gauge I scale (NEM 010), aka 3/8" scale (LS, NMRA S-1.2), for modelling metre gauge narrow gauge railways, using the correct scale of 1:22.5. Metre gauge is the most common narrow gauge in Europe. Because of its size and durability, G scale is often used outdoors. Such installations are known as garden railways.

In the United States, the commonly used narrow gauge is 3 feet (36 inches); modelling this correctly with a 45mm track gauge gives a scale of 1:20.3, (Fn3) which is commonly used by American manufacturers. Correctly speaking, these are not really G scale, but they are frequently called that. Some people call 1:20.3 "F scale". Other scales are used to model other narrow gauges; although some call models of standard gauge equipment to 45mm track gauge 'G scale', these models are actually I scale (NEM) or 3/8" / Large Scale (NMRA). 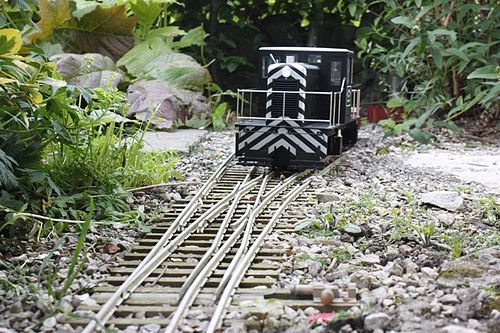 The major European manufacturer, and the one that really made garden railways popular, is Ernst Paul Lehman Patentwerk, and is sold under the brand name of LGB (Lehmann Grosse Bahn, or "Lehmann Big Train"). The company was founded in 1881 and started producing LGB in 1968. Today it produces models of European and US originals, of steam, diesel and electric prototypes as well as a large range of coaches, trucks and accessories.

The track gauge doesn't change, but the proportions of the equipment shown at Trains of the World does in this image.

Dealing with these big trains can be very, very confusing, especially for a beginner. If you don't understand all this, don't worry. This is more of a reference and not meant to be "remembered".

G scale is perhaps the most confusing in terms of scales. It helps to think of it this way first: G is not a scale as such, it's a term to describe "trains running on 45mm gauge track"

All scales run on the same gauge track.

Some generalizations (before we get into the manufacturer sizes):

And finally, a note about couplers in regards to scale sizes:

For couplers, it's been recommended to switch everything over to Kadee's....but be careful! Kadee makes both 1/32 scale (approximately) and 1/22 scale (again, approximately) couplers for large scale trains. And there's about two billion (slight exaggeration) types of large-scale Kadees, depending on what car or locomotive you're trying to convert.

In short: (Width while on scale → Width effectively used) 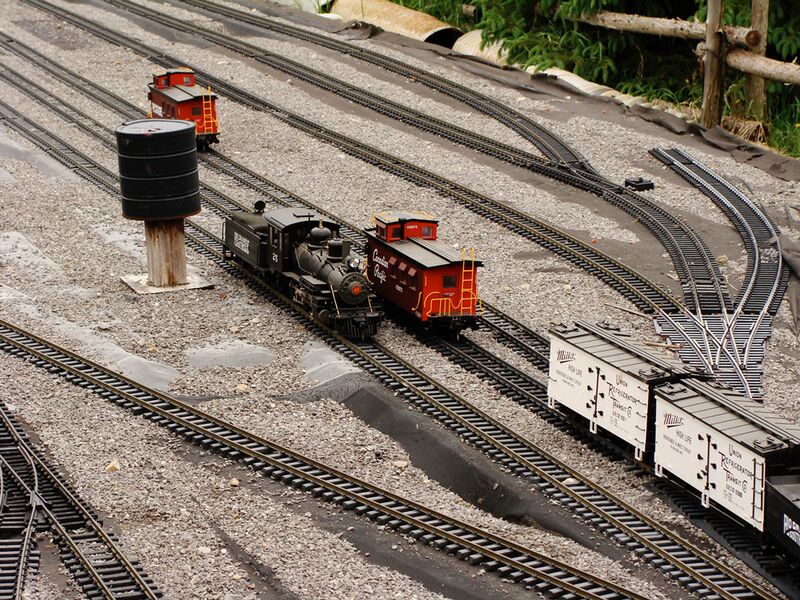 Manufacturers and their Sizes

This list may not be accurate. There may also be some disagreement on these numbers. Please consider this a reference.

Accucraft live steam British outline stuff, including the new Garrett, are built to the UK garden railway scale of 16mm to the foot, or 1/19th.

Generally, all new offerings are standard gauge of 1:29 (notwithstanding one recent narrow-gauge railcar in 1:20.3). Older Aristo models representing narrow gauge were done in 1:22.5 and are generally inaccurate or fantasies.

Their narrow-gauge models are nominally 1:22.5 but at least as far as North American styled models go, they are generally inaccurate or just fantasies. Their standard gauge offerings are of unknown scale though often about 1:26 and are frequently inaccurate or fantasies. The most recent offerings like the Genesis are standard gauge and appear to be fairly accurate 1:29 models. LGB of America has indicated that future sg models would be accurately scaled to 1:29.

Most of their offerings including all the recent ones are sg and are accurate models rendered in 1:29. Their old models of ng equipment are done in 1:22.5 and are more or less fantasies.

The NMRA has definitions for Large Scale in both standard and narrow gauges: LS and LSn3. In either example, the scale is 0.375"/9.52mm to the foot, with the track gauge being 45mm (nominal).

Neither scale designation includes a common/fraction scale or a proportion, as both can vary.