Summary: The History of Model Railroading is long, with many scales and gauges used. This article provides a brief description of the various scales/gauges as used in Model Railroading, and their evolution

The gauge is the same. The scale is what differs.

The History of Model Railroading is long, with many scales and gauges used. This brief article attempts to explain the scales (or gauges) used over time.

In keeping with the source material, the term gauge will be used.

The source for this article is "The Origin of the Gauges", by Ed Vondrak, NMRA Bulletin, December 1983.

Some gauges may not appear, as they are the realm of tinplate and don't have a lot of relation to model railroading today.

Other derivatives are narrow gauges, indicated by an n, such as HOn3 or On30. The suffix indicates the track gauge, but the scale does not change. They are not discussed in this article.

Toy trains have been around almost since the inception of railroading. Wood or metal pull toys appeared in the 1830s. Trains that actually ran on a track appeared around 1866, when Issmayer of Nuremberg introduced a clockwork driven toy train that ran on a circle of track.

From the late 19th to early 20th century, the toy industry was centered in Nuremberg, Germany. Nuremberg was the largest production center for toys in the world, so Issmayer's idea quickly spread through the industry.

The real shift came in 1891 at the Leipzig Spring Fair, the venue where many toy makers would show their new products. Marklin, a toy company founded in 1859, revolutionized the industry. Marklin demonstrated a new line of trains, all of which ran on standard track, complete with standard sections, switches and crossings. The loop was now obsolete.

Even more revolutionary was Marklin offered their track in three standardized gauges:

Note: The Europeans like to prefix these things with Gauge, so Marklin offered Gauge 1, Gauge 2 and Gauge 3 trackage.

Marklin would later introduce an even smaller Gauge D, at 35mm.

Marklin's innovation would soon be adopted by another Nuremberg toymaker, Bing, the largest toy train manufacturer in the world at the time. In a matter of time everyone in Nuremberg was making trains that used Marklin's gauges.

Another important event occurred ten years later when a British company, Bassett-Lowke, contracted with Bing to produce the first truly scale model trains. The gauges had already been set, so the scales followed.

Ives, in the United States, introduced O gauge in 1901, using the Gauge D track set by Marklin. Ives trains were clockwork driven at the time. In 1910 Ives began selling electric trains, as other companies such as American Flyer in Chicago were undercutting their prices on the clockwork trains. Ives electric trains were produced in O and Gauge 1.

Gauge D is 1.33 inches, or 35mm, Gauge O is 1.25 inches (32mm). Modern practice is to measure between the rail heads, where Gauge D is measured from the center of the rails. Ultimately, they are the same, flange to flange.

After 1869, the emphasis began to shift toward scale and away from gauge. Toy makers were not too concerned that the proportions of their models were obviously wrong. British importer Bassett-Lowke insisted that the train be proportionate to the gauge, and was alone in that respect for a number of years. As time passed and scale became more important, modelers found compromises were made between scale and gauge.

Gauge 1 soldiered on, staying reasonably pure at 3/8 scale, or a scale ratio of 1:32. During the conversion to metric in Europe and Britain, some compromises occurred, one being a 10mm to the foot, or 1:30 scale adopted by some. 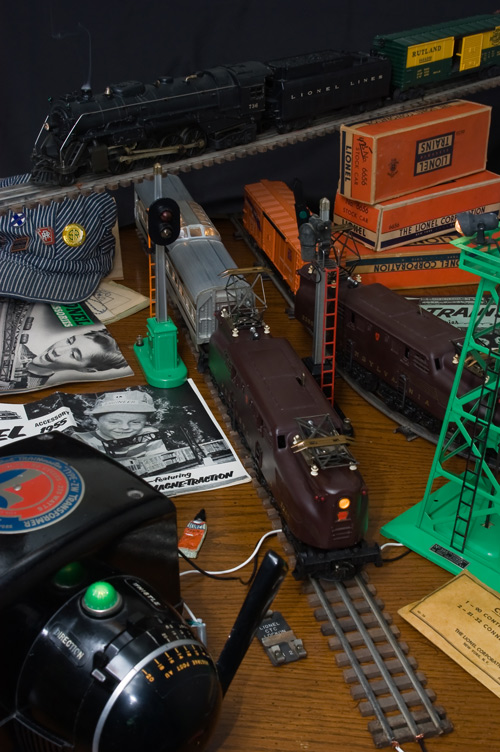 Gauge O has been compromised all over the world. There have been at least six scale/gauge definitions. As a quarter-inch scale, the track gauge is in fact 5 feet. A variation of 17/64" attempts to bring everything into proportion with the track, and another called Q Gauge, at 1 3/16" between the rails tries to make the track match the models.

Metric conversions resulted in a ratio of 7mm to the foot, or 1:43.5 and a track gauge of 32mm appearing in Britain. This was taken further with ScaleSeven, a 33mm track gauge using the same scale and ratio.

HO or Half Zero (H0) gauge, appeared in the 1920s. In time a compromise would occur in Britain, leading to OO or Naught Naught Gauge. The OO and HO scales share a common track. The difference is in proportions. British model railroad makers could not get a motor small enough to fit into the narrow British steam locomotives. Trains in Britain have a smaller loading gauge than that of North American or European railroads. Some say that they run narrow gauge trains on standard gauge (4' 8.5") track. As HO gained popularity in the 1930s, British makers had to mount oversized bodies on HO running gear. Hornby used the name Dublo for their range of OO products. Track manufacturer often label their products as OO/HO.

The scale for OO is 1:76, 4mm to the foot, using standard HO Gauge trackage. The result is narrow gauge track at 49½ inches with standard gauge equipment compared to the Standard Gauge of 56½ inches. The difference is obvious when HO and OO trains and track are placed beside each other.

In North America OO has remained pretty much the same as it was.

These were an outgrowth of the OO/HO situation in Britain. Modelers attempted to widen the gauge of their rolling stock to bring the track into proportion with OO scale equipment. This resulted in a gauge of 18.25mm. Still not quite correct.

The next evolution was EEM, using an 18.83mm track gauge. Even that fractured into ProtoFour and ScaleFour. By the 21st Century, the differences have been largely resolved; there is one ScaleFour society which supports the 18.83 gauge modellers. Technically there are two track/wheel standards, the majority use P4 the minority the more scale-accurate S4.

A number of additional gauges have appeared that are not related to those introduced by Marklin in 1891.

It appeared quite early, when in the UK a 3/16" model was made for competition in 1896. Working models appeared before the First World War. Post war it disappeared, but reappeared again in the mid 1930s with Marklin displaying 1/64 products in 1932. C-D gauge, made by the Cleveland Die Company, operating as Cleveland Model and Supply Co., came on the market in the 1937. Based around 3/16" to the foot using a 7/8" track gauge. The C-D was derived from Cleveland Design.

A. C. Gilbert's American Flyer (1938) was originally 3/16" three rail O gauge, and their version of S was simply a re-gauged version introduced in 1939 after they had sold off the Standard and O Gauge inventory acquired in their purchase of Chicago Flyer. They began using the designation S on true S Scale trains in 1946.

The designation S Gauge originated at the 1943 National Model Railroad Association Convention. The names of various gauges were officially adopted by committee.

Gauges in common use such as 0 (Zero) became the letter O and Half 0 became HO. "S Gauge" almost adopted the designation of Half-1, but due to the repetition of S in the sixteenths and sixty-fourths the designation of "S" was adopted. The "Half-1" designation was almost adopted due to heavy lobbying, but other committee members selected the letter "S" over objections. It is from the early American commercial adoption of the scale that derives the legend that 'S' is a wholly American scale.

The heyday of S was in the 1950s thanks to the presence of American Flyer, although more S scale product is available today than on those times. Although Lionel outsold American Flyer by 2:1, O Scale itself only held about 20% of the market with HO having taken about 70%. Lionel would re-introduce S scale American Flyer trains in 1979. While it was a minority scale, popularity jumped from 0.7 to 7.6% between 1941 and 1948. Much of this was attributed to the adoption of two rail S gauge by American Flyer in 1946.

TT appeared after the Second World War. Development had begun prior to the war, but was suspended for the duration. TT would benefit from the development of small, powerful DC motors during the war. In the world of TT, Hal Joyce is the father of TT, and his H.P. Products was founded for the purpose of making TT scale equipment. TT would hold the crown as smallest model railroad scale until the arrival of N scale in the 1960s.

N Gauge or Nine Millimeter Gauge, appeared in Europe in the 1960s. European and North American practice is a 9mm track gauge, with models built to a 1:160 ratio. Japanese practice is 1:150 scale, and sometimes larger scales so that prototypes running on 3ft 6in track are correct for 9mm track gauge.

In Britain, OOO scale (2mm:ft or 1:152) existed prior to the appearance of N gauge. Some products were sold under the Treble O brand. There was a small commercial market in OOO items from Lone Star, and an emerging finescale standard (now well established as 2mm FineScale at 1:152 scale). In the latter half of the 1960's, Peco began offering N gauge items at 1:148 which has become the established scale for British N models.

For more on N, see the N Scale History page.

This gauge was introduced by Marklin, using a 1.61mm to the foot ratio or 1:220. (It is unknown if there is a British variation.) 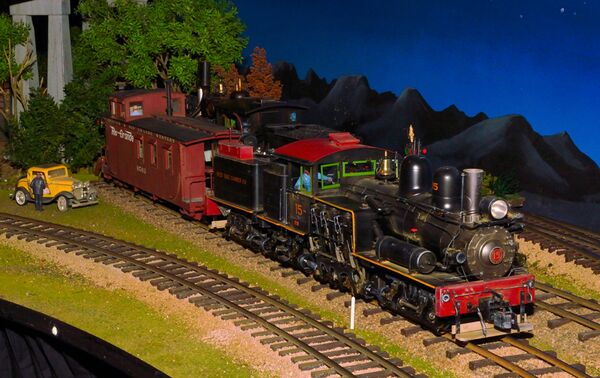 Narrow gauge railways were built using a track gauge narrower than Standard Gauge. This was often done to save money and simplify construction in rugged areas, such as mining or logging operations. The track was cheaper to lay, and often used tight curves allowing the track to wind through the terrain without a lot of additional grading. As a result, the equipment had to be smaller to negotiate the trackage.

Modelers have also adapted to narrow gauge railways. On30 is O scale, but the equipment is smaller, as narrow gauge equipment usually is, and runs on a scale 30-inch track. The track is in fact, H0 gauge track. On30 is popular, and commercial equipment and trackage is available from major manufacturers.

Garden railway systems are another interesting lot, as many are based around the meter gauge found in Europe and other countries. Again, the scales have fractured in an attempt to maintain the correct proportions in relation to the track. 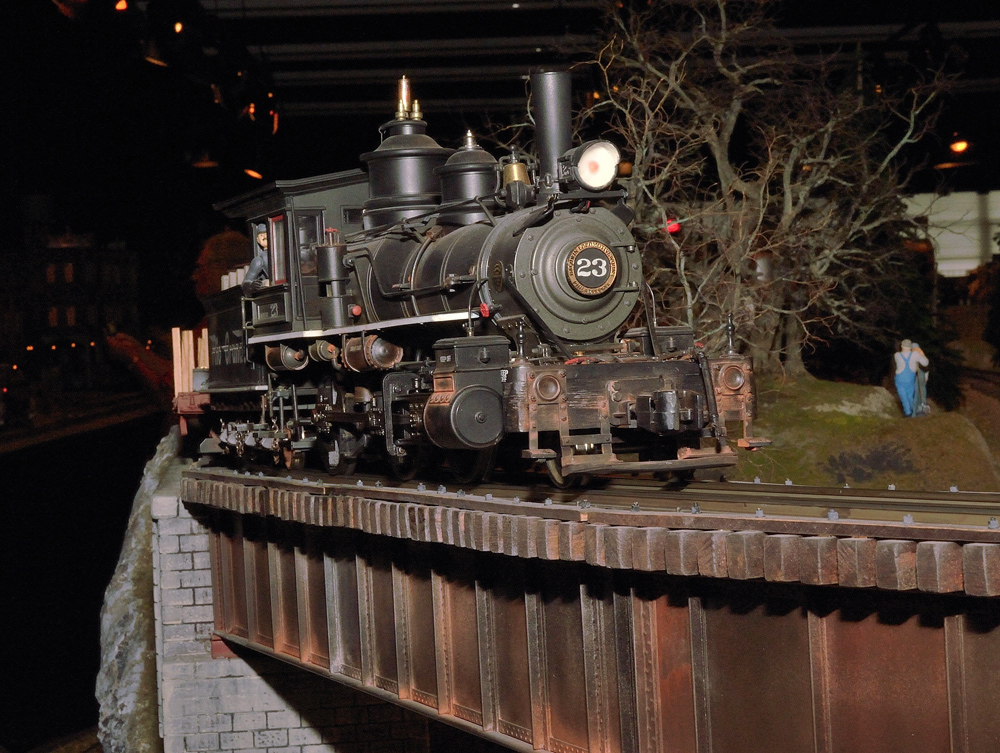 These are internal links to pages on the DCC Wiki

There is a wealth of information available on the internet to help you.

Measuring Tools for Model Railroaders The ability to measure accurately and precisely is important for a number of aspects of scale modeling because, to one degree or another, modelers are usually attempting to reproduce a miniature representation of an actual subject. This means that you must be able to accurately scale down prototype measurements and then precisely transfer them to a model. Even if you are working from a kit, you may find yourself measuring the kit parts and comparing them with known dimensions so that you can verify their scale and accuracy. When dimensions or accurate drawings are not available, it may be necessary to derive measurements from photographs. In addition to measuring distances, modelers also frequently need to use squares and protractors to measure angles. So whether it be planning or construction, the ability to measure accurately is essential.