Summary: HO scale is the most popular scale for model railroading.

HO scale (H0 scale in continental Europe) is the most popular model railway scale in the world outside the United Kingdom, where the slightly larger (in scale) OO scale is most common. OO in fact uses HO gauge trackage, but is out of proportion compared to the track.

The name is derived from the German Halb-null ("half-zero"), because its 1:87 scale is approximately half that of O scale. In North America it is sometimes referred to as 1:87.1, or 3.5mm to the foot. O Scale is quarter inch (6.4mm) to the foot.

Modern HO trains run on realistic-looking two-rail track, powered by direct current (varying the voltage applied to the rails to change the speed, and polarity to change direction), or by Digital Command Control sending commands to a decoder in each locomotive. Some trains, most notably by Märklin of Germany, run on alternating current, supplied by a third rail consisting of small bumps on each tie down the centre of the track. In fact, early HO trains used a center third rail, just like Lionel trains used. Some early HO modellers built elaborate trackwork with an outside third rail for power.

As early as 1922 Bing introduced a table top clockwork train set in H0, using track with a gauge of 16.5mm. In 1924 they began offering electrically powered versions. Accessory makers such as Kibri offer scale buildings.

In the spring of 1935 the Trip Express was demonstrated at the Leipzig Spring Fair, where the track gauge was described as half-nought, later called Gauge 00. Marklin would follow this development with their own 00 gauge products at the Leipzig Autumn Fair.

The economic pressures of the Great Depression resulted in HO scale, which cost less than the larger scales. Many of the larger scales disappeared during the 1930s as the consumers who would had bought them could no longer afford it.

HO scale trains first appeared in the United Kingdom in the 1930s, originally as an alternative to OO scale. It proved unsuitable for modelling UK prototype trains. It also could not gain a foot hold in a market dominated by OO.

HO became very popular in the North America, where it took off in the late 1950s after interest in model railroads as toys declined with more emphasis placed on realism in response to hobbyist demand. While HO scale is by nature more delicate than O scale, its smaller size allows modelers to fit more details and more scale miles into a comparable area. During the 1940s HO and O were neck and neck, but in the 1950s HO had taken the lead and became the majourity scale. Eventually Lionel and Marx, the two large toy train makers, would add HO to their product line-up.

In the 1960s, as HO cemented its lead over O scale in popularity, even the stalwarts of other scales, including A.C. Gilbert (makers of the S Scale American Flyer) and the Lionel Corporation, began manufacturing HO trains. HO locomotives, rolling stock (cars or carriages), buildings, and scenery are available today from a large number of manufacturers in a variety of price brackets.

HO is the most popular scale in Europe and North America. In the United Kingdom OO is still dominant. A British 1:87 scale society forming in 1994.

Standards for HO scale are maintained by the NMRA and MOROP.

A number of products are marketed as "HO Scale", but are really not the correct scale. In slot cars, HO refers to the track they use, the actual cars can be 1:87 to 1:64 in scale.

Sectional track from the UK is often marketed at OO/HO Scale. Both scales use the same track gauge, so it is interchangeable. The difference is the rolling stock in OO is larger, at 1:76. Effectively it is standard gauge equipment running on narrow gauge track.

A number of products, such as buildings, are often sold as OO/HO scale, but correct for neither. Often the actual scale is 1:82, making them large for HO and smaller in OO. Figures and vehicles vary greatly, being labelled as HO in an attempt to appeal to model railroaders.

Some manufacturers of kits apply selective compression to reduce the size (footprint) of the kit. On their own it will not be noticed, but next to another structure the differing widths in the doors and windows can be noticed. 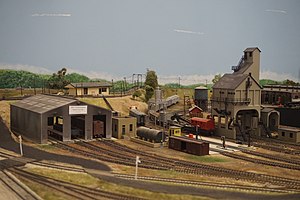 HO scale models are widely available to the hobbyist. They come in several categories

A number of suppliers exist for detail parts to super detail rolling stock or construct structures from scratch. Windows, door frames, and other structural elements can be made in metal or plastic. Other items include line side details such as turnout machines, signals, signal cabinets, etc. Even track can be detailed.

Metal castings are available to fit locomotives with the correct appliances and other fittings. Details are also available for cabooses, freight and passenger cars.

Locomotives can be purchased with a multifunction decoder installed at the factory, usually featuring sound. Others may be DCC equipped but silent as there is no sound component. Budget priced locomotives may be marketed as DCC Ready, meaning a decoder can be added easily.

See Model Railroad Scales for more information on the various scales and their evolution.