Summary: A Quarter Test is a simple method to determine the wiring is correct, and the current protection systems are working as they should.

Not be be confused with Quartering, the process of aligning drivers on a steam locomotive. 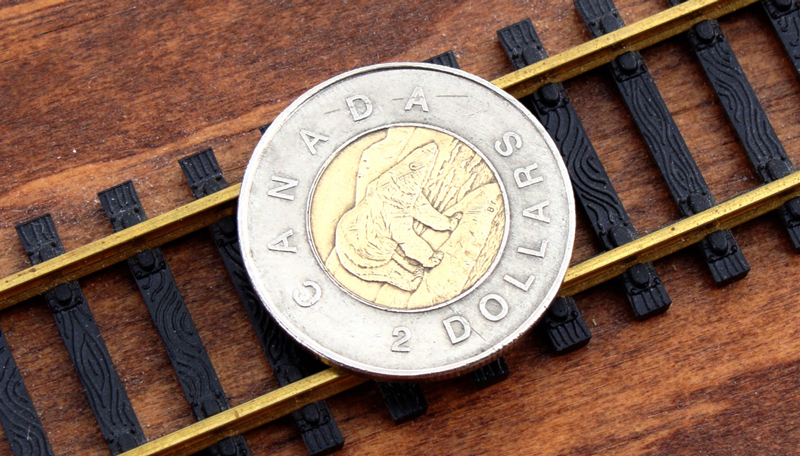 Coin shorting both rails for a Quarter Test.

The Quarter Test is simple: A metal object is placed on the track in a manner which shorts the rails together. Typically, that object is a coin, such as a quarter. The shaft of a screwdriver or other metal object can also be used.

By doing so, if the track is energized, the circuit protection system should disconnect the command station / booster immediately, and sound an alarm if so equipped.

If the system does not trip and disconnect the power from the track, there is either a problem with the wiring, the circuit protection is not working, or, power is not being applied to the track at the time of the test.

This test should be done every 3 metres (10 feet) along the track to establish that the wiring is adequate. If doing so does not shut down the booster's output, a heavier gauge power bus and/or more feeders may be required.

See the article on wiring for DCC for the details of wiring a DCC layout correctly. This is particularly important when rewiring a layout from Direct Current (analog) to DCC control.

DCC Boosters are designed to react quickly to over current conditions, often resulting in nuisance trips when turnouts or other special trackwork are involved.

The over current protection of a DCC booster does not work in the same manner as a fuse or circuit breaker. Modern electronics can detect the rate of change in current flow. Incorrect or inadequate wiring creates conditions which interfere in their ability to detect a sudden change. A five amp booster will trip when the load reaches or exceeds its nominal current output, to protect itself from overheating. But, should the current demanded by the layout suddenly jump the booster will interpret that as a problem and the circuit protection should activate. This prevents damage from occurring should a short circuit current occur that is well below the nominal rating of the booster.

The trip point is defined by the slew rate. If the current increases suddenly, such as during a short circuit event, it will exceed the slew rate and disconnect track power. Sound decoders can cause this when they charge their capacitors after track power is turned on. Boosters and power managers may have a setting to delay disconnection in cases like this.

The reason for using this method is the I2R law: Amps Squared Times Resistance, the result is power dissipation in watts. A 10-ohm resistor shorted across the track will dissipate, for example with a 1.5A current flow, 1.5 X 1.5 X 10, or 22 watts of energy. This can quickly melt a truck side frame, or weld a wheel to the railhead. A five amp fuse will allow this to happen.

Poor wiring can interfere in the detection of a short such as this. Good wiring is important to protect your DCC system, along with the motive power and rolling stock on the layout. 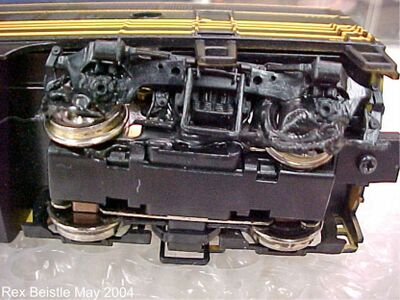 Damage caused by a short circuit.

If you are doing this as you wire the track, make a temporary connection between the booster and power bus, which you can disconnect when soldering. This will prevent the possibility of ESD from the soldering iron damaging your booster.

Tail Light bulbs as current limiters: This is a concept from the analog world, and belongs there. Using a lamp to limit the current can interfere with the over current protection by introducing additional resistance into the circuit. It can also result in damage to boosters which have a lower current output by allowing current to flow, generating excessive heat in the process.