Summary: A servomotor is typically used in Radio Control models and robotics but can also be used for automation on a model railroad. 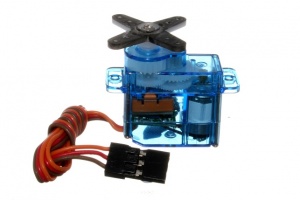 A servomotor is a rotary or linear actuator used for control systems. They allow for precise control of angular or linear position, velocity and acceleration. They are constructed using a suitable motor and sensor for position feedback. They range from simple to quite sophisticated in construction.

For model railroads purposes, servomotors from the Radio Control aircraft hobby are popular. They are often referred to as servos or RC Servos. They are constructed using a small motor with a set of reduction gears driving the output shaft. A potentiometer is used to sense the position of the shaft. Additional electronics are needed to control the motor.

In operation, a signal is generated by the controller, and the motor responds by moving in the direction needed to balance the system and cancel the error between its position and the commanded position. When the system is in balance the motor stops moving. This allows precise positioning of the shaft. The shaft mounted potentiometer is used to create the feedback needed to control the motor.

This is called proportional control, as the motor has no fixed positions and can respond proportionately to the control signal. In the case of an RC airplane, the servo's response is related to the inputs from a joystick. For model railroads, the speed is usually fixed and the positions are preset to actuate a turnout, crossing gates or a semaphore signal.

Micro-controllers such as the Arduino can also be used to control servos.