Summary: A Turnout is the arrangement of rails to allow a train to be switched between the main route and a diverging route. In model railroad terminology, turnout usually refers to a ready-made track item that can be incorporated into a layout, but the idea is the same. A turnout is also known as a switch, set of points or simply points.

A complete turnout consists of:

The frog consists of a number of parts.

In prototype and model practice, it is often formed from a single cast part.

In Model Railroading the following terms are used to describe a turnout:

The number of a frog is the ratio of the spread to its distance from the theoretical point (where the long and short point rails would form a point, not the actual point).

A number 4 frog is 1" in 4". The spread is measured at right angles to the center line. The actual angle formed is 14 degrees 15 minutes.

As per prototype practice, for high speed movements a turnout of #16 to 20 is recommended. Mainline slow speed movements, #10 to 12. Yards and sidings, #8. For modelling purposes, #8 is good for most applications, with smaller frog angles for yards and branch lines.

O, HO, and N Scale are expressed in Inches.

As the table shows, a number 20 turnout requires a radius of 21 feet in N Scale. So for modelling purposes, a number 10 or 12 turnout is reasonable compromise at five to seven feet (in N).

To say the least, Digital Command Control has certain requirements that must be met by your track work. The two electrical issues are related are the switch (sometimes called the points) rails and the frog. Using your NMRA gauge to verify the clearances of the turnout as goes a long way.

Verify wheel sets are in gauge using an NMRA gauge. Out of gauge wheel sets can cause shorts and derailments. Consider replacing plastic wheels with metal ones, as plastic wheels can wobble due to manufacturing issues. Verify that the trucks have free movement in both horizontal and vertical planes.

There are two types of frogs: Live (powered) and Dead (unpowered).

The dead frog means it is isolated from the rest of the track. Typically the frog will be made from an insulating material such as plastic, but metal can be used as well. This method made turnouts which were much more Digital Command Control compatible than older turnouts with live frogs, at less cost. The PECO Insulfrog is a good example, as are many other brands, such as the Atlas Snap Track and almost all turnouts made with brass rail. Also available are turnouts by Micro Engineering, Walthers, the Atlas Custom Line Code 83 turnouts and others with metal frogs insulated from the adjoining rails.

Dead/Insulated frog turnouts are shown in the picture for Self Isolating Turnouts.

Live Frogs are metal and electrically connected to the track power. They have the advantage of less unpowered track but are slightly more complicated to wire up. Isolated frogs are made from metal but are electrically isolated from all the other rails which makes them behave very much like insulated frogs. However, being metal, this gives you the option to convert them to live frog by attaching a feed wire to the frog.

There are two ways that live frogs can get their power:

Just because the frog is constructed from metal (a casting or with rails) does not mean it is live.

An example of a live frog is the Peco Electrofrog.

On a Digital Command Control layout, turnouts can be operated remotely by Turnout Motors controlled by Stationary Decoders using commands sent from a Throttle.

Commercial turnouts are produced in many different shapes, sizes, sleeper types, rail profiles, and degrees of realism. To complicate the choice there are various different electrical behaviours and some are labelled "DCC-Ready" or "DCC-Friendly" and others are not. So, which type should you choose?

You do not have to buy turnouts labelled "DCC-ready" and you do not have to modify existing turnouts when converting a layout to Digital Command Control. You should choose the turnouts that best suit your overall requirements and don't go out of your way to find "DCC-ready" or "DCC Friendly Turnouts". However there are several special considerations to bear in mind and if you're just starting out on a Digital Command Control project it will be well worth investing the time to understand the different types of turnouts, their various benefits and the best way to wire them up.

But before you read on and get too confused, remember a few rules...

This is the issue that confuses many modellers.

Non-power routing turnouts are turnouts where all routes are always powered. In commercial turnouts, this is achieved with internal bonding wires (usually on the underside) between the stock and switch rails or stock and closure rails (the diagram shows the latter case but they are effectively equivalent to each other). Since the stock and switch rail pair is electrically connected and share the same phase relationship, there should be no shorts caused by a wheel bridging the gap between them.

Atlas and Roco are examples of non-power routing turnouts.

Self-Isolating / Power Routing turnouts are those which only power the track on the selected route, the other route is electrically dead. This is a good feature for analog layouts because it automatically isolates a locomotive sitting idle on a siding. The point of using Digital Command Control is you do not need to cut the power to make a locomotive stop, and doing so will prevent things from working; such as sound, lights, and CV programming. The solution is simple though, just add power feeds to the track in the siding. Insulated Rail Joiners or gaps cut into the track are needed to avoid creating a short.

This feature is usually implemented by wires connecting the closure rail to the appropriate point rail, located beneath the frog. The switch rails function as a electrical switch, connecting or disconnecting power. 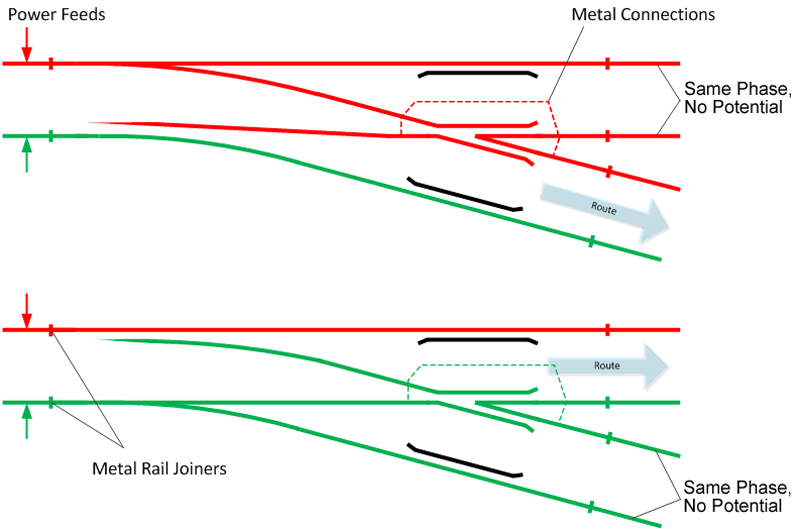 Non-Isolating Power Routing turnouts only power the track on the selected route, the other route has the same phase on both rails. To a locomotive, it sees no potential difference (voltage) between the two rails. Like the self-isolating trunouts this is not good for Digital Command Control. And whether you're using Digital Command Control or not, this type of turnout needs isolating rail joiners or gaps (not shown in the diagram) on the end of the point rails to prevent short circuits when power is also fed from elsewhere.

These turnouts have all of their point rails, closure rails and points electrically connected together. In some cases this is partly because the closure rails share the same metal hinge mechanism. The frog may or may not be live, in the diagram below a live frog version is shown. Shorts may occur if a wheel bridges the gap between the switch and stock rail.

Shinohara Turnouts (Walthers) come in two varieties. The older ones are non-isolating power routing. They can be identified by the metal bars joining the switch rails together and there are no gaps at the toe and heel of the frog. Small metal tabs under the points connect the switch rails to either stock rail.

With the self-powered or power routing type of turnout, the frog is electrically connected to switch rails and therefore takes the phase according to the route selected by way of the switch rail contacting the stock rail.

The main task to perform is to gap the two point rails. With ready-made turnouts this simply means installing insulating rail joiners on those two rails. The second task you may want to perform is wiring a frog feed that also provides the correct phase to the frog. This avoids having to rely on the contact between switch and stock rails making a good electrical connection.

Peco call theirs Electrofrogs. Peco's live frog turnouts are ready to use out-of-the-box (using insulating rail joiners on the point rails) as the self-powered type. However they are designed to be easily converted to the other type (frog switching) if desired. Without modification, the risk of shorts between the switch rail and its adjacent stock rail exist, as both switch rails share the same phase.

Many brands offer these types of turnouts such as Micro Engineering's older turnouts, Shinohara, Walthers and PECO's Electrofrog. 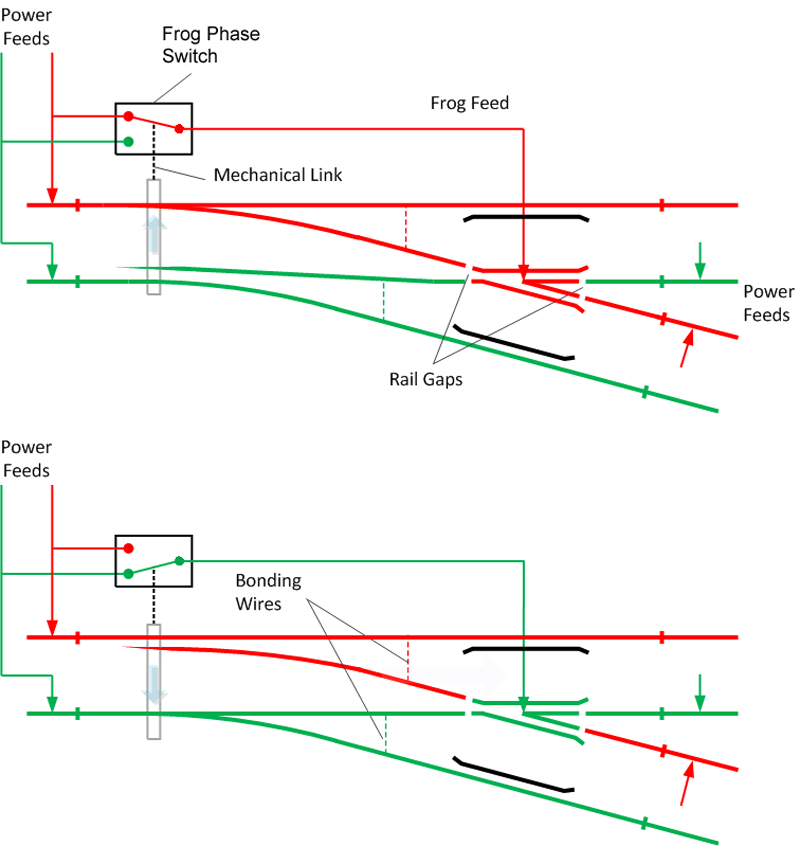 With frog switching, the frog is isolated from all the other rails and must get its power from a separate power feed that switches accordingly.

The next diagram shows "Digital Command Control-Friendly" turnouts with the frog phase switch added. Here a switch is mechanically linked to the tie-bar so that whatever operates the points also operates the frog switch. This can either be a turnout motor with a built in switch, or a SPDT switch mounted at the side of the layout with a rod or wire-in-tube linking it to the tie-bar. An alternative to a mechanical switch is an electronic device such as the Frog Juicer.

Three types of short circuits can occur at turnouts. Most of the time none of these should be an issue but if you want to improve the reliability of your layout take note.

The smaller an insulated frog is, the less dead track there is to inadvertently stall your locomotive. However if they are too small and your rolling stock wheels are too wide there is a risk that a metal wheel will bridge the gap between the two point rails where they meet in the frog. Peco Insulfrog turnouts can have this issue, especially with older, cruder profile wheels.

During installation the point rails must have insulating rail joiners to isolate them from the downstream trackwork. This allows the switch to control power flow to the point rails, and eliminates the issue with bridging the point rails in the frog. This is important if the point rails are electrically bonded together.

If this proves to be a problem for you, see the page on the Peco Insulfrog for a simple fix.

This is another issue that can occur with crude profile metal wheels, or with wheel sets or rails out of gauge. If the wheel's tread is wide enough the back of the wheel's flange can touch the side of the open switch rail.

Out of gauge wheel sets or trackwork where the wheel can bridge the gap. Verifying wheel gauge and turnouts clearances with an NMRA Gauge can identify these issues. In the case of wheelsets, they should be checked and corrected as necessary before new rolling stock goes on your layout.

If you hand lay your trackwork, use an appropriate gauge to check the clearances during turnout construction, especially the switch rail clearances. The gauge can also identify issues with commercial turnouts as well, since compromises are made for manufacturing.

Insulated frog or live frog turnouts can have this issue depending on how the switch rails are wired. Ideally they should be isolated from the frog and electrically connected to the adjacent stock rail.

This issue can occur with Peco Electrofrogs because out-of-the box both switch rails are electrically connected to the live frog which means the one rail will have the opposite phase of the adjacent stock rail. Peco supply instructions with all their Electrofrog turnouts for modifying them to solve this problem.

Running into Turnouts the Wrong Way (Against the Points)

(This resource may no longer be available).