Decoder fitted with an 8-pin plug

Summary: The NEM 652 or 8 Pin DCC Plug is one of the standard plugs used for Locomotive Interfaces. The plug is on the end of a loose wiring harness coming from the decoder and mates with a fixed female socket mounted on the locomotive chassis. The 8 pin version is known as the medium size and is the most common standard DCC connector used in HO and OO locomotives.

DCC-ready locomotives with 8-pin sockets are shipped with a factory-installed 8 pin blanking plug that shorts the rail pickups to the motor terminals (and headlights) in the absence of a decoder. This plug must be removed before installing the decoder and must be replaced if removing the decoder and returning it to analog operation.

For this article the term NMRA 8 Pin will be used.

This table depicts the pin assignment of the NMRA Medium 8-pin plug or 8-pin socket (both viewed from above). Although the wiring is designed to work properly one way round, no harm is done if it is inserted the other way round by mistake (but the lights will not work). This plug and socket combination is identical to the NEM 8-pin plug and socket (defined by NEM 652) used in Europe.

Pin 1 should be clearly marked on the plug and socket with a small triangle or dot.

When soldering wires onto the connector, use the cup side. 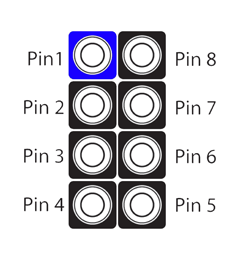 It is possible that, while the manufacturer has installed an 8-pin interface, it is wired incorrectly. Failing to isolate the motor terminals from the rail connections will destroy your decoder.

You will need a DMM for this process, on the Ohms (Ω) setting. Touch the probes together to verify the meter is working, the display should show a very low resistance (0 or slightly more). If using an analog ohmmeter use the zero-adjustment knob to bring the needle to "zero".

Remove the dummy plug and set it aside.

Measure the resistance between the following points:

The DMM display should indicate an open circuit (infinite (∞) resistance) on all the above combinations. If using an analog ohmmeter, the needle should not move.

Remove the dummy plug and set it aside.

The DMM display should indicate an open circuit (infinite (∞) resistance) on all the above combinations. If using an analog ohmmeter, the needle should not move.

The 8-pin connector has the following specifications:

The contact ratings are for the individual pins of the connector only and do not reflect the capabilities of a particular decoder or requirements of a particular locomotive. For example, if a locomotive's maximum sustained motor current is over 1.5A, this plug and socket should not be used.

This information is based on NMRA RP-9.1.1 Electrical Interface & Wire Color Code, which also describes the small and large sized alternative plugs, with further information provided by the Digitrax DZ143PS instruction manual and the Soundtraxx Tech Note 16.