Summary: Digital Multimeter (DMM), are test instruments for taking various measurements and similar to many of their analog counterparts.

Digital Multimeters (DMM) range from cheap to expensive. As a general rule, a low cost DMM may be adequate for low voltages at low frequencies. If you plan to use your DMM for more than just track work, buy a good one. Cheap ones can be a safety hazard when used on high voltage (more than 48V) circuits. As with all tools, cheap tools can be more dangerous than the proper one for the application.

Note: They are not useful for measuring DCC voltages. They are designed to measure low frequency AC voltages, and present that information as the Root Mean Square Voltage. (RMS is used to represent the equivalent Direct Current heating value of AC Power). Since the DCC signal is a high frequency digital waveform, the resulting readings will be very confusing.

A higher quality DMM will not only last longer, but is more accurate as well. Avoid the older analog meters, the ones with the needle that indicates the quantity being measured. The low-cost analog meters introduce their own problems into the equation, making it difficult to diagnose an issue accurately. A DMM appears almost as an open circuit during voltage measurements, where a cheap analog meter can appear as a 20,000 ohm load in parallel with the circuit being tested. Parallax error is another issue that will come with an analog meter. 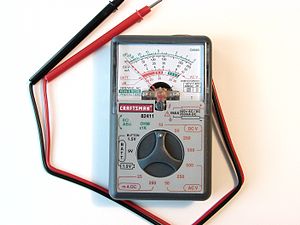 Originally, they were called an AVO meter (amps/volts/ohms) by their inventor. Later copies were called a multimeter, as it had multiple uses. They replaced the analog VTVM (Vacuum Tube Voltmeter) or VOM (Volt-Ohmmeter).

Simple Troubleshooting with a Multimeter

Verify the connections and settings of your DMM. Often you much move a lead from one connection to another for current measurements. Note the maximum current. Many DMMs have a fuse to limit it, and will blow if overloaded.

Once the meter is configured for use as an ammeter, connect it in series with the load. This means breaking the circuit and inserting your ammeter in it to complete the circuit, so all the current flows through it. Connecting the meter in parallel with the source or load will not be good, and may damage your meter.

If you blow the current protection fuse, always replace it with an exact replacement fuse. This is for safety. In some meters, the fuse is used as a shunt, and the improper replacement will degrade performance.

Your voltmeter can be used to measure voltage (potential) across the terminals of a power supply, or across the rails. The voltmeter goes in parallel with the load. For DCC measurements, the meter should only be used for comparison measurements. Do not rely on it providing an accurate indication of the track voltages or currents.

Example: If you connect a voltmeter across the terminals of an electrical switch:

With the switch open you should see full voltage.
If the switch is closed (circuit is completed) there will be no voltage.

Connecting a voltmeter across a resistor will measure the voltage drop in accordance with Ohm's Law. Current flowing through the resistor causes a voltage across it proportional to the resistance. If full voltage is appearing, the resistor is bad as there is little to no voltage drop. Resistors tend to fail high, so the current flow/voltage drop will be minimal.

An Ohmmeter is never used on an energized circuit!

The Ohms (Ω) function measures resistance. It does that by supplying a small current from the internal battery to the probes, and measuring the amount of current flowing. Lots of current, low resistance. No current, the resistance is infinity (an open circuit.) Which is why the scale on an analog ohmmeter is in reverse (zero is at the right, or "full scale deflection".)

Before using your ohmmeter, touch the two probes together and look at the display. The meter should indicate a value close to zero ohms. It will never be perfect, as there is resistance in the leads. This check verifies the meter is working correctly. If using an analog meter, adjust the zero-control potentiometer to bring the needle to zero.

When the probes are not touching, the display should indicate infinity. Read the manual that came with your meter to verify how the open circuit or infinity value is displayed. Many DMMs will display a "1" at the left side of the display.

The ohmmeter feature can be used to check fuses for continuity, measure resistors, verify the anode of a diode, and other uses. For checking track wiring, you can use it to verify Rail A is connected to the correct bus wire, since it should have zero resistance between the bus connection and the rail. Rail B should be an open circuit, if not you have a wire crossed somewhere.

One important aspect of a digital multimeter is the ability to make accurate RMS measurements. Many of the better-quality instruments will incorporate true RMS measurements, where lesser instruments will use average values. The difference is that a true RMS meter will give you an accurate indication of the DC heating value of an AC waveform. It will take into account any distortion, harmonics and DC content in the waveform to arrive at the value.

Many True RMS (TRMS) meters have significant errors when measuring a square wave signal, such as that of a DCC Waveform. The error can be as much as 10% or more. RMS means Root Mean Square. It is a mathematical method of determining the DC equivalent of an Alternating Current voltage or current.

Cheaper digital multimeters do not provide true RMS measurements, they often measure the average value of an AC voltage, and are calibrated to correct the result to the RMS value for a sine wave. For a pure sine wave, this is acceptable. Outside of 50/60Hz, or with distorted waveforms, the results can vary. Under normal usage this works, but errors occur if harmonics are present, causing the error to become progressively worse as the harmonic content increases. In the case of a square waveform, the resulting error can be more than 11%, and the duty cycle of the waveform will introduce even more errors into your reading. If DC is present, the error will be even greater.

With many DMMs, the maximum frequency is 1kHz, after that the accuracy is no longer guaranteed. With the DCC waveform being in the 8 to 10 kHz range, you cannot expect much accuracy even with a good DMM.

Why is this important?

Unless you use the same meter every time, it is not possible to compare previous and future readings with what you see today. Also comparing readings with other modellers using different meters will not provide any useful information, as they may be using a meter with better (or worse) specifications than yours. If comparisons are made using quality meters with similar specifications, the results are much more useful.

A Basic Digital Multimeter will have the following capabilities:

A more sophisticated model may offer additional functions, such as:

Additional features do not mean the device is more accurate!

Periodic recalibration is also recommended. See the manual. All DMMs drift over time.

Many DMMs will automatically select the best range for the input being measured. Some may also offer the user the ability to manually select a range.

DMMs are marketed with a number of specifications.

Accuracy figures must be interpreted with care. The accuracy of an analog instrument usually refers to full-scale deflection; a measurement of 30 V on the 100 V scale of a 3% meter is subject to an error of 3 V, 10% of the reading. Digital meters usually specify accuracy as a percentage of reading plus a percentage of full-scale value, sometimes expressed in counts rather than percentage terms.

Quoted accuracy is specified as being that of the lower millivolt (mV) DC range, and is known as the "basic DC volts accuracy" figure. Higher DC voltage ranges, current, resistance, AC and other ranges will usually have a lower accuracy than the basic DC volts figure. AC measurements only meet the specified accuracy within a specified range of frequencies.

A multimeter can be assumed to be "average responding" to AC waveforms unless stated as being a "true RMS" type. An average responding multimeter will only meet its specified accuracy on AC volts and amps for purely sinusoidal waveforms. A True RMS responding multimeter on the other hand will meet its specified accuracy on AC volts and current with any waveform type up to a specified crest factor; RMS performance is sometimes claimed for meters which report accurate RMS readings only at certain frequencies (usually low) and with certain waveforms (essentially always sine waves).

A meter's AC voltage and current accuracy may have different specifications at different frequencies.

A low cost DMM with 3½ digits could have an accuracy of 0.8% ± 5 counts on the 40VAC range. If it displayed 20.0, the actual voltage could range from 19.2 to 20.8V. That is why one meter should be used to make comparison measurements.

Measuring low resistances with a DMM is not a worthwhile endeavour. To accurately measure low resistances, such as that of nickel silver rail, requires a lot of current for an accurate measurement.

Using the example of the Fluke 87 DMM, the accuracy at the lowest range (400Ω) is a resolution of 100mΩ, ±0.2% + 2 when using the REL ∆ function to compensate for offsets. The error alone is ±800mΩ. Which is acceptable when measuring a 50Ω resistor.

A Fluke 189 specifies the 500Ω range has a resolution of 10mΩ and an accuracy of ±0.05% +10, or ±250mΩ, using the REL ∆ feature to zero residual reading errors. That error alone is greater than the rail resistance.

Scope traces showing the DCC signal on each rail, and the top trace represents the combined signal.

The only true way to get accurate measurements of a DCC signal is with an oscilloscope. The next best thing is the RRampmeter, which is specifically designed for the DCC waveform. A good high quality DMM will cost more than a RRampmeter. But it is useful for other troubleshooting and maintenance work you will have. As mentioned earlier, most meters are not capable of measuring accurately at DCC frequencies.

Accuracy is how close to the ideal value the meter will display. Precision, which is better described as repeatability, is a measure of how faithfully it will reproduce similar results over multiple measurements. For example, when measuring a 9V battery the meter consistently reports a value between 8.9 and 9.1V over a number of measurements. Should it report values of 8.5 to 10V, the meter is not very accurate, as it reports a different value for each measurement. But an inaccurate meter can also report the same incorrect value repeatedly.

Meter loading is when the meter alters the circuit parameters and the resulting readings. The DMM excels here, having an impedance of megohms per volt. Cheap analog meters (the ones with the needle moving across a scale) can have impedances as low as 1000 ohms per volt. That can cause problems by putting a low resistance in parallel with an equal or higher resistor, resulting in misleading readings.

Another issue is safety. High quality electrical measuring devices are designed for safe usage on high voltages. They will be marked as to their limits. Cheap meters can be dangerous at high voltages (which is defined as any voltage over 48V).