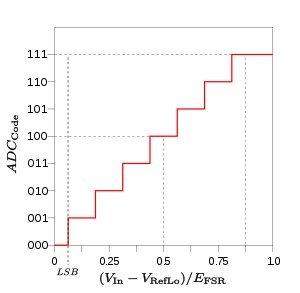 Dither is noise intentionally added to an analog signal. Its purpose is to improve accuracy when the signal is digitized by preventing unwanted artifacts from being created during the sampling process. By adding random noise to the signal being sampled, low level signals can be better sampled, while increasing the dynamic range.

In Digital Command Control, it is noise deliberately introduced into the motor's drive signal. While the motor is driven by a PWM signal, introducing random duration changes at random times improves slow speed operation. This helps keep the motor turning, as well as overcoming friction in the motor and drivetrain. The firmware of the multifunction decoder controls this feature. Some decoders may allow adjustment, while others may lack this feature.

The term comes from the verb didderen, meaning to tremble.

There has been a lot of effort in the past to get model locomotives run better, especially at low speeds. This work predates DCC, when modellers only had analog DC systems to work with. As a result of these efforts, various manufacturers developed analog pulse power throttles. Instead of providing continuous DC voltage to the motor, they would turn power on and off with slightly higher voltage to "bump" the loco to start. This was an improvement over pure DC, but this was just the first stepping stone to today's technologies.

Because of how electric motors work, it takes slightly more power to get an electric motor started than to keep it running; this is known as static friction or stiction. Stiction and dirty track are the reasons why it is hard to run locomotives reliably at a slow speed.

To overcome stiction, you have to give the electric motor an initial burst of power to get it moving, then reduce the power to the level at which the electric motor, and hence the locomotive, runs slowly. However, due to many factors, some electric motors will not continue to run at the slow speed and may eventually stop – sometimes burning up because of the current still flowing through the stalled motor. 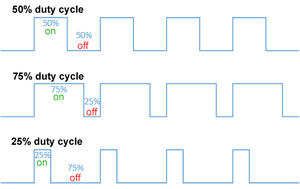 There are two technologies in many of today's decoders to help locomotives overcome the stiction hurdle. One is kick starting the motor with an initial burst of energy. The second, and more advanced, is dithering.

DCC multifunction decoders employ Pulse Width Modulation (PWM) to control the locomotive's motor. The motor is not getting a smooth DC waveform, instead it is getting full voltage being pulsed on and off. The ratio between On and Off is the duty cycle. At slow speeds the duty cycle is very short, such as 5% (5% On, 95% Off). As the throttle is opened the duty cycle increases until it reaches 100%. Many analog DC throttles use this technique too. Pulsed power helps overcome a lot of the stiction in motor and gear box. However, it is not always enough and is often inadequate at low speed in particular.

Avoid using a vehicle equipped with a multifunction decoder on track supplied by an analog power pack with pulse power. Excessive voltage spikes created when using the pulse power mode can damage or destroy the decoder.

High frequency decoders (aka: Silent Drive, Quiet Running, SuperSonic) use a higher pulse frequency to make the motor run more quietly. However, some motor torque is lost as a consequence. Dither was originally developed by Train Control Systems to overcome this loss of torque. However, it also helps overcome "stiction" too.

Dither adds a little extra noise at frequencies different from that of the normal PWM frequency. This results in some extra bumps of voltage at irregular intervals. Because "stiction" can be immune to some frequencies, the addition of a second variable frequency PWM signal can help overcome the "stiction", allowing a locomotive to crawl gracefully along the tracks. This is the same principle as tapping an analog meter to increase its accuracy.

In some cases, dither makes the motor run even quieter too.

Dither is not intrusive. It comes turned off and you do not need to bother with it unless you want to use it.

Dither is programmed with CV56 and CV57. The factory default for these two CVs is zero (0), which turns dither off. These CVs fall into the Manufacturer Unique category so consult the decoder's documentation for these features.

CV56 is used to select a frequency. The range for this CV is 0-255, with 0 (zero) being off. The highest frequency addition of 30 extra pulses per second is obtained with a value of 1. The higher the value, the fewer additional pulses are added. It's recommended that you start with a value or 5, but the optimum value is obtained through experimentation. Many find that the practical range is 1 through 10.

CV57 controls the amplitude of the additional pulses. The range for this CV is 0-255, with 0 being off and 255 being the highest voltage pulse. Many find the practical range for CV57 is about 5 through 50. It's recommended that you start with a value of 25 to 30. The optimum setting is again obtained through experimentation and time.

Dither's extra voltage bumps are only provided in the lower 1/5 (20%) of the speed range, where it's needed. Dither can be used in conjunction with V-Start and/or Kick Start to provide additional power to make most any locomotive start and run smoothly at any speed.

What Dither Doesn't Do

Althought DCC and its underlying technology can compensate for the occasional loss of signal (dirty track), it can only do so to a limited extend. It cannot compensate for poor wiring or excessively dirty track.

The dither feature is provided solely by the decoder. You will have to check your decoder specifications / feature set to determine whether dither is available. Decoders with dither will work on any DCC system. They only require a DCC system capable of programming CVs 56 and 57. Once that has been completed, the decoder will use dither.

Systems that can program CVs 56 and 57

The following is a list of DCC systems capable of programming CVs 56 and 57 to enable or modify the dither feature of a decoder.

If you know of other systems which allow programming of these CVs, please add them.