Electrical Devices are various components used for the control and consumption of electrical power. Examples include switches, lamp sockets and outlets.

For DCC, we would be interested in the various wiring devices, such as switches, Marrettes, and associated items used to connect your track to the power source.

Devices is the term used in the Electrical Code. We will also use this term for a similar purpose.

These are for routing electricity, not trains.

There are many kinds, from the familiar toggle switch to more specialized types, such as rotary switches.

Nomenclature: Switches are often denoted by the number of throws, and number of poles. They will also be specified as Make before Break, or Break before Make. Typically they will break the connection prior to making the new connection.

Single Pole Single Throw. This would be familiar as an ON/OFF switch.

Single Pole Double Throw. This switch can also be used as an ON/OFF, but it disconnects both wires instead of just one as a SPST would.

Double Pole Single Throw. This switch can toggle from one circuit to another. A common example would be the switches used to control a light from two positions, such as at either end of a hall. Depending on the alignment of the switches, the lamp will be on or off. The switch that controls your car's high beams would also be an example if you only have a pair of high/low headlights. If you have a four lamp setup, it would use a DPST and SPST in the same package. The DPST selects which filament is energized.

Double Pole, Double Throw. Same idea as the SPDT, except there is an additional pair of poles. They can be used to select a circuit, such as Speaker A or B, or Input A or B. A common application in model railroading would be to select one of two cabs connected to a block, or by correct wiring, used to control direction.

As with the above, you can have a number replace the X. You can have various combinations, from 3P or 4P, or even more. As you add more poles, the cost increases rapidly.

Some switches are built to have a third position, where there are no connections made. The switch would be described as ON-OFF-ON, instead of ON-ON. Typically, the center position is OFF.

Momentary switches are spring loaded, so once the force is removed the switch returns to its normal position. These are used for twin coil switch machines or solenoids. The coils will burn out if power is constantly applied to them.

These terms mean Normally Open or Normally Closed. These switches are momentary in nature, where a spring returns the switch contacts to their normal position when the force applied is removed. A typical NC application is the brake switch in your car. Depressing the pedal removes the force holding the switch open, and the lights come on as the internal spring pushes the contacts into their closed position. When the brake is released, the pedal is pulled back to its normal resting position, and the lever pushes against the button on the switch and opens the circuit, de-energizing the brake lights. Simple yet effective.

A NO switch would be those on the keyboard of your computer. Pressing a key completes the circuit, releasing the key allows the spring to return to its normal position and open the circuit.

These terms are used with switches. Often the description with specify Make before Break or Break before Make. This indicates the action of the switch, does it break the first connection before making the second one, or are both connections made before the first one is broken?

For most DCC applications, a Break before Make type is preferred. Especially if you are wiring a program track. This type of switch ensures that the booster's track bus and programming outputs are not connected together when the switch is thrown. If being used in reverse loop situation, it prevents the two phases from being shorted together.

A rotary switch rotates instead of toggling. They can be used to select multiple circuits and route power/signals in complex ways. They may have one deck, they may have multiple decks, depending on the application. Older audio equipment such as receivers would have rotary switches to select the AM or FM section and connect it to the amplifier, route the phono input into the preamp and from there to the amplifier, or disconnect the phono input and connect the AUX input. The switch is wired in such a way that only one circuit can be connected at any time, all others are disconnected.

An application with model railroading would be to select one of several cabs and connect it to a block. Or to set a turnout and route power.

A similar type of switch would be a ganged pushbutton switch, where only one can be depressed, pressing another mechanically releases the switch before the button you pressed latches.

An encoder is a type of rotary switch, but it has multiple outputs. The outputs form a binary value, which changes as the knob is rotated. Many DCC throttles use encoders to control the speed. Turning them causes the binary value on the output to increase or decrease. Much easier to interface to a microprocessor than a potentiometer found in an analog cab.

While not devices in the true sense, these products enable you to easily and reliably connect two or more wires together. Without soldering.

The generic name for a Marrette is a twist on connector. They are named for the inventor, George Marr. (The term Wire-Nut is also a trademark.)

The common form of Marrette is a plastic cap with a wire coil of spring steel inside. Two are more conductors are stripped and lightly twisted together. The Marrette is pushed onto the conductors and twisted. The coil bites into the soft copper and mechanically secures the wires together. They are very reliable and used in electrical wiring everywhere. They also work with stranded wire.

They replace terminal strips and soldered splices. They can also be removed for later rework. Twist on connectors are available from a number of companies, and come in a variety of colours which indicate the gauge of wire they are designed to work with. 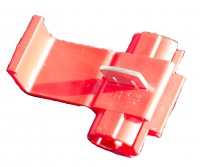 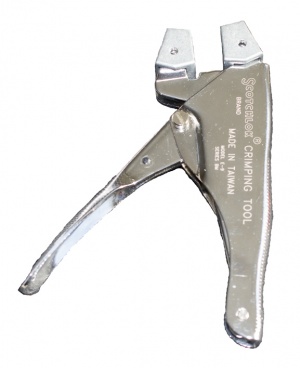 IDCs, also known as ScotchLoks (made by 3M) can connect two wires together. The device has two channels, one passes completely through the device, the other is blind. The main bus would pass through, and the feeder would be tapped off in the blind channel.

Once the wires are in place, a special pair of pliers is used to press a metal blade into the wires. The connection is made by slicing through the insulation on both wires. The blade has two openings so only the insulation is cut, not the conductor.

The pliers used have jaws that move in parallel to each other, so the crush force is evenly distributed. After the blade has been pushed into the body to make the connection, a plastic cover is snapped down over the blade to protect the connection and hold the two halves of the body together. The appearance earned the IDC connector the nickname "suitcase" connector.

Please note that there are many knock-offs of the original ScotchLok design, some are good, others are much cheaper and not as good.

ScotchLoks come in a number of colours, which indicate the gauge(s) of wire it can accommodate.

Another variety of Scotchloks are Tap Connectors, which are similar in nature. You crimp the Scotchlok onto the bus wire, and the secondary connection is made using a quarter inch (0.25") tab type connector inserted into a mating slot. This allows connection and disconnection easily.

The Power Poles are made by Anderson Power Products, and are already a de facto standard in the RC modeller world. NTrak also endorses their usage. Male and female connectors are made, which make connecting power to modules, etc., easy.

Crimping is an efficient and highly reliable method to assemble and terminate conductors, and typically provides a stronger, more reliable termination method than that achieved by soldering.

Terminations, or lugs, can be crimped onto solid or stranded wire. The barrel of the termination is placed over the end of a stripped wire and crimped using crimping pliers designed for the purpose. The result is a mechanically secure gas tight connection. Terminations are available in a number of sizes, for a variety of wire gauges, in the form of rings, forks, or spades. The application determines the type of termination. Forked terminals can be mated using a terminal strip. There are also pin types, which would be used with connections such as those found on Digitrax command stations.

With insulated terminals the better quality connectors have a metal sleeve to grip the wire insulation, lower quality parts do not have this. Look down the barrel of the crimp from the wire entry end. You will see metal almost to the end of the crimp in a quality part, but it will stop short in cheaper parts.

All terminals are sold with defined wire size ranges. Insulated ones can be identified by the colour of the sleeve. Typical sizes are:

For layout wiring, bus wiring will use Yellow or Blue connectors, while feeders to the rails would typically be Red.

Insulated terminals are best crimped with a specialized tool designed for the purpose. They are not cheap. The crimper has three colour coded dies that match the insulating sleeve's colour, which results in a much better crimp than that done with a simple pair of pliers.

Uninsulated terminals are also available, often through electrical suppliers in bulk quantities (i.e. 1000 pcs per box). They can be crimped easily with a proper crimping plier. While a specialized set of pliers is needed, they are much less costly than the crimpers designed for insulated terminals.

Do I Need to Solder Crimped Connections?

There is absolutely no need to solder any crimp. Soldering may actually reduce the reliability of the crimp. Crimps are designed to control the flexure of cable at the entry point. Soldering can stiffen the joint and result in premature failure. The solder can wick up into the wire, under the insulation. This creates a stiff section of wire, and the strands can break at the boundary between flexing and stiff wire.

In fact the crimp, when properly applied, results in a gas-tight connection so the solder can not penetrate the barrel, as there is no place for it to go. Do not tin the wire before crimping, as this limits the ability to create a gas tight crimp. The strands of wire have to move to fill all the gaps when the crimp is made.

Metal "combs" are also available, which allow you to bridge several terminals, making distribution of power from one connection to a number of connections possible.

Made for solid and stranded wire, after stripping the insulation the conductor is inserted into a hole and pushed in. A spring inside makes it difficult to remove the wire later. The connector will often have three positions, two or three wires can be connected using this device.

There must be more…

3M has a lot of information on their products available online.

This pages will provide you with information on the 3M IDC products available, so you can make an informed choice. Follow the instructions for reliable usage on your layout.

These devices can be purchased from vendors such as Micro Mark, Digikey, and other suppliers, in small or large quantities. Often you will not find the more esoteric versions at your local hardware store or electrical supplier.

They make a variety of connectors for almost any use.