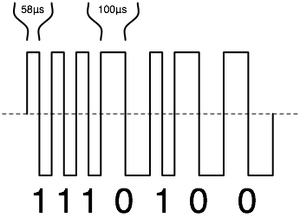 Long answer: Digital Command Control uses a 100% digital signal on the rails, delivering both power and data in the same signal. The digital information is encoded in the time domain by pulse width, not amplitude. It is not superimposed on a DC or AC waveform, nor does it use a high frequency carrier.

Since the signal is completely digital, the NMRA Digital Command Control waveform is a square wave and thus, is not AC. It is not DC either as the phase between the rails alternates to deliver the commands to multifunction decoders installed in the locomotives.

Being digital, the signal has two states: On or Off.

The signal on the track is floating, it has no polarity as it has no fixed reference point. The confusion arises from the fact that the current flows from Source to Sink. The relationship between Rail A and Rail B is constantly alternating between one as source and the other as the sink, creating the oscilloscope traces many reference as proof of a positive and negative signal.

To add more confusion, the NMRA Standard defines the positive rail as the righthand rail as determined by which way the locomotive is facing.