The History of Nine Millimetre, OOO or N Scale 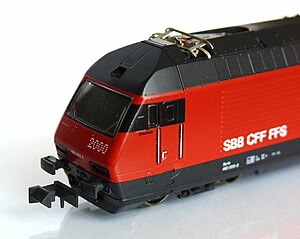 Kato locomotive in N Scale with the Rapido Coupler

Although trains and accessories of similar gauge or scale existed as early as 1927, modern commercially produced N-scale models were first launched by the Arnold company of Nuremberg in 1962. Unlike other scales and gauges, which were de facto standards at best, within two years N-scale manufacturers defined the gauge and voltage, as well as the height and type of couplers. For example, Arnold developed the now ubiquitous "Rapido" coupler to provide a simple and robust releasable coupler design. Although the original Arnold coupler has been joined by more functional and aesthetically pleasing designs, Arnold allowed use of the Rapido design by other manufacturers, so established a common standard to couple together rolling stock from different sources.

In 1967 Aurora began importing Arnold OEMed trains into North America and selling them under the "Postage Stamp Trains" brand to emphasize the small size. Revell's Revell/Rapido Micro Gauge were imported Arnold products, using tooling from Germany to mold the shells in California, shipping them back to Arnold in Germany for final assembly and finishing. Treble-0-Lectric brand trains were being imported in 1962. Arnold began appearing in 1963, with Con-Cor following in 1966. PECO began offering N Scale track the same year, and in 1967 Atlas began selling trains manufactured by Pola as well. Atlas would catalog a full line of N Scale products in its 1967/68 catalog.

In the US Sears began offering Aurora and Revell N Scale train sets in their 1968 Christmas Wish Book.

The American hobby press urged caution, fearing that this new upstart scale would harm the popularity of H0 Scale. The hobby was still dealing with the threat posed by slot cars, as well as the decline of TT Scale.

N scale is second only to HO in popularity. In Japan, where space in homes is more limited, N scale is the most popular scale, and HO scale is considered large. Not all modellers select N because they have small spaces; some use N scale to build more complex or more visually expansive models.

N-gauge track and components are also used for narrow gauge modelling in larger scales, such as H0e and 00-9 for modelling narrow gauge railways. N-scale models on Z-scale track are used to represent metre gauge.

N scale standards have been set by both MORP and the NMRA. They share elements such as the track gauge, scale of 1/160 and electrical requirements. Wheel and trackwork often don't follow any standard. The height of the rail is excessively high compared to the prototype in many cases, often for reliable operations and compatibility with necessarily oversized wheel flanges. Rail in Code 80, 70 and 55 are often used. Code 80 itself represents 227-pound (per yard) rail and is almost 50% oversize. Code 70 is the equivalent of 198lb/yd, and C55 is 155 lb/yd. Most railways don't use rail that heavy. 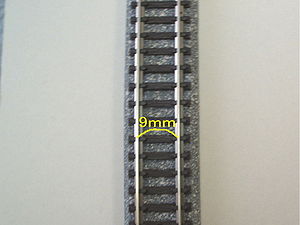 Remember that scale and gauge are not the same. Gauge represents the distance between the rails, and scale is the proportion. N scale is a metric scale, the track gauge of 9 millimetres represents a gauge of 1.44 metres (9 × 160), close to 1.435 m of the prototype. The difference is 200 thou, which would not be noticed at that scale. Toy trains, such as those by Lionel, are not proportionate to the track gauge, and often the rolling stock has a number of dimensional compromises for reasons of cost and operational reliability. The track gauge used for 0 scale toy trains is broad gauge, as the locomotive is smaller yet wider than it should be.

The initial agreed-to standard coupling was known as a 'Rapido' coupler from Arnold. The Rapido coupler system works well, but is difficult to use for automatic uncoupling and also very large in comparison to the prototype's coupling methods.

In the US, Canada, and Australia, it has been largely superseded by a more realistic-looking magnetic knuckle coupler, originally made by Kadee/Micro-Trains and originally branded as the Kadee Magne-Matic. The couplers are more delicate and closer in scale to North American couplers than Rapido couplers. A magnet placed under the track or between the rails allows uncoupling. Other manufacturers, such as Atlas, McHenry and Kato, are now making couplers that mate with Micro Trains couplers.

In Britain, some N scale models are built to "2mm scale" for "2mm to the foot" which calculates to a 1:152 proportion. Early N scale was also known as "OOO" or "Treble-O" in reference to O and OO scales and was also 1:152, though for an entirely different reason.

In the United States and Europe, models of standard gauge (4'8.5") trains are built to 1:160 scale and made so that they run on N gauge track. This combination is also called N scale. The minor difference doesn't bother anyone (except the 2mm scale modellers) and allows the convenient use of track manufactured in the U.K. for all N gauge trains. One such manufacturer is Peco. N Scale is also used in the popular Collectable Miniature game Mechwarrior produced by Wizkids Games. To learn more about the game, visit www.wizkidsgames.com\mechwarrior.

Although trains and accessories of similar gauge and/or scale existed as early as 1927, modern N scale only appeared in 1962. Unlike other scales and gauges, which were de facto standards at best, within two years N scale manufacturers defined the gauge, voltage, as well as the height and type, of couplers.