The Frog Juicer is an electronic autoreversing device sold by Tam Valley Depot.

Live frog turnouts require power ("juice") to be supplied independently to the frog with the correct phase to match the route selected. The Frog Juicer supplies the power and switches the phase by electronic means rather than a mechanical switch. The Frog Juicer detects the short circuit caused when the frog's phase is incorrect and instantly switches to the correct phasing.

The main purpose of live frogs is to eliminate stalling on switches with short wheelbase locomotives, such as a switcher. Locomotives with all-wheel pickup are not affected, but those without may be suddenly disconnected from their power source should both wheels of one truck be on a dead frog. 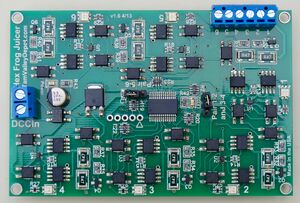 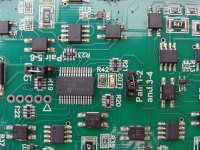 In addition to switching the phase of a frog, it can also be used as an autoreverser for crossings or turntables.

Frogs can also be paired, so both switch at the same time. Jumpers on the PCB allow these behaviours to be enabled.

The Frog Juicer works by monitoring the current flowing into the frog. When a locomotive shorts the frog to the adjoining rail, the Frog Juicer senses that and cuts power to the frog. After a short interval, the phase is reversed and power reconnected to the frog.