Summary: A Hardwired Decoder is used when a locomotive is not DCC-ready and does not have a plug or a drop in replacement DCC control board. The decoder must be soldered directly to the rail pickups and the motor terminals. 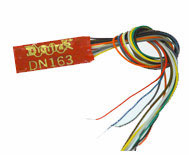 Example of a hardwired decoder

Unlike plug in multifunction decoders, which use a plug and socket for ease of installation, hardwired decoders have a harness consisting of wires which must be soldered to various connections in the locomotive during installation. After installation the wires must be cut or desoldered to remove the decoder for replacement.

Though there is no strict standard for hardwired multifunction decoders, they usually closely follow the wiring conventions for 8 Pin DCC Plugs.

A decoder with a JST Connector is similar to a hardwired decoder because the connector only interfaces between the decoder and its harness, the other end of the harness must still be soldered directly to the locomotive's pickups and motor terminals.

The Blue "common" wire does not connect to the frame! It is common to the various function lines. It connects to the Anode (A) terminal of an LED.

For decoders with more function outputs there may be additional wires and there may be violet and brown wires for two different functions (F2 and F3).

Both motor terminals and all functions must be fully isolated from the rail pickups before installation.

The negative and positive sides of the headlights and functions are important if the devices are polarity sensitive, such as LEDs.