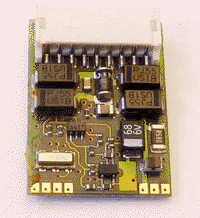 Example of a decoder with a JST connector

JST is not a connector! It is the name of the manufacturer, which makes many connectors.

A JST Connector is a mechanism to connect a Mobile Decoder to its wiring harness. This means the decoder is removable and replaceable without any further soldering. The 9 pin version of this connector is covered by the NMRA standard.

JST refers to the component manufacturer, Japan Solderless Terminal Manufacturing Co. Ltd., of Japan, maker of the plugs and sockets used in these applications. The NMRA Standards refer to the JST part number for the socket as S 9B-ZR-SM2-TF.

Installing a decoder with this socket is similar to installing a Hardwired Decoder because the other end of the harness must still be soldered directly to the locomotive's pickups and motor terminals.