Summary: The modular connector was originally used for telephone equipment. For DCC, it is commonly used for throttle network connections, such as those for LocoNet, Cab Bus and XpressNet.

Modular Connectors were originally developed for use on Bell System telephone equipment. Over time a number of variations have appeared. "RJ" refers to both the wiring standard, and the associated connector.

The 6 position modular connectors (sometimes only the center two or four are used) are typically used for connecting telephone equipment. Widely used in DCC for bus connections and cab plugins.

The RJ11, 12, 14 and 25 are the same physical size, the difference is the RJ12 is a 6 position, 6 conductor (6P6C) connector. The RJ45 is larger, often found on networking cables. The 4P4C connector (often called a handset connector is used in some applications.[1]

See the LocoNet article for more information on the RJ connector series.

The RJ12/RJ25 are used to make a throttle network cable. The difference is in the wire type used:

Using the incorrect type for the wire being crimped onto will result in problems later. The "stabs" on each pin are designed for a specific wire type. 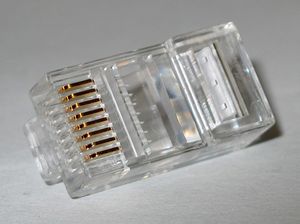 To identify the pins, hold the connector with the tab facing down, and the opening for the cable facing you. Pin #1 is the leftmost pin.